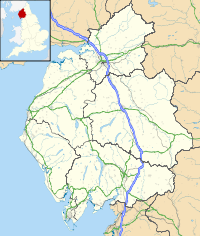 Map showing the location of the Anthorn VLF transmitter within Cumbria.

The Time from NPL is a radio signal broadcast from the Anthorn radio station near Anthorn, Cumbria which serves as the United Kingdom's national time reference.[1] The time signal is derived from three atomic clocks installed at the transmitter site, and is based on time standards maintained by the UK's National Physical Laboratory (NPL) in Teddington.[2] The service is provided by Babcock International (with which former providers VT Communications merged) under licence from the NPL and is funded by the Department for Innovation, Universities and Skills.[1]

The signal, also known as the MSF signal (and formerly the Rugby clock) is broadcast at a highly-accurate frequency of 60 kHz and can be received throughout the UK, and in much of northern and western Europe. The signal’s carrier frequency is maintained at 60 kHz to within 2 parts in 1012, controlled by caesium atomic clocks at the radio station.[1]

A radio station at Rugby was first operated by the Post Office from 1926, with the call-sign GBR. From 19 December 1927, it broadcast a 15.8 kHz time signal from the Royal Observatory which could be received worldwide. It consisted of 306 pulses in the five minutes up to and including 10:00 and 18:00 GMT, with a longer pulse at the start of each minute. Frequency-shift keying was added in 1967, making the signal harder to use as a frequency reference. Eventually, time signals from GBR were terminated in November 1986 and it is no longer used as a frequency reference.[3]

The MSF signals started in 1950, following the transmission pattern described below. They were originally intended to provide frequency references at 2.5, 5 and 10 MHz, originally only occasionally during the day. At first, there were announcements every fifteen minutes, beginning with the Morse code representation of "MSF MSF MSF", followed by speech "This is MSF, Rugby, England, transmitting ...".[3] From May 1953, the signal was broadcast 24 hours a day, but with regular five-minute stoppages to allow the reception of other signals. The 60 kHz signal finally became an uninterrupted 24-hour service in 1966, and the frequency references were discontinued in February 1988.[3]

On 27 February 2007 the NPL started tests of the new time signal transmissions from Anthorn, latitude 54° 55' N, and longitude 3° 15' W.[4] This station has the callsign GBZ and is operated by VT Communications.

The formal inauguration of the relocated facility took place on 1 April 2007, when the name of the service became "The Time from NPL" and the signal from Rugby was permanently switched off.[5][6] The change in location and consequent change in signal strength can make some equipment designed to use the MSF signal fail to continue doing so. This is found more in domestic equipment not designed for optimum sensitivity and positioned haphazardly; only the few people aware of the Rugby switchoff will have made the connection between failure of MSF devices and the switchoff.[citation needed]

The 'MSF signal' and the 'Rugby clock'

From the time signal's inauguration in 1950 until 1 April 2007 it was transmitted from Rugby radio station near Rugby, Warwickshire.[3][7] The transmitter's original location meant that the clock was referred to as "the Rugby clock".[8][9] Following its relocation, the NPL now formally calls the signal "The Time from NPL".[7]

The Rugby transmitter's callsign was MSF, where 'M' is one of the ITU prefixes allocated to the United Kingdom, and the letters 'SF' were allocated for no documented reason. This resulted in the common terminology "the MSF signal", which is still used by the NPL.[3] The official history of the service says that "Rugby was given an additional commitment for the transmission of reference Modulated Standard Frequencies", but no actual explanation is given for the call sign "MSF"[10].

The transmitted signal has an effective radiated power of 17 kW, on a frequency of 60 kHz to within 2 parts in 1012.[1] The signal strength is greater than 10 mV/m at 100 km; it is greater than 100 μV/m at 1000 km from the transmitter, and thus can be received at not less than this strength throughout the UK.[7] The signal can also be received, and is widely used, in northern and western Europe.[1]

While at Rugby the transmitter generated 60 kW of radio frequency power (using 70 kW of mains power). The 180m-high T-aerial antenna was 500m across at its top. The vertical part of the antenna radiated the signal, so that the received strength was similar in all directions (it was approximately omnidirectional).[3]

In addition to professional uses where accurate time is required, radio-controlled clocks with both digital and analog displays using the NPL signal are widely used (similar clocks are available in other regions with standard time transmissions). As far as users are concerned they are simply clocks with the same features and settings as others, but always display the right time, and correct themselves for summer time.

The MSF transmitter is switched off for brief intervals (on-off keying) near the beginning of each second to encode the current time and date. The rise and fall times of the 60 kHz carrier are determined by the combination of antenna and transmitter.[11]

Each UTC second begins with 100 ms of 'off', preceded by at least 500 ms of carrier. The second marker is transmitted with an accuracy better than ±1 ms relative to Coordinated Universal Time (UTC), which is itself always within ±1 second of Greenwich Mean (solar) Time (GMT).

Although two data bits are transmitted per second, the time code has the property that only one of them is variable; non-zero B bits are only transmitted when the corresponding A bit has a fixed value.

Seconds 01–16 carry information for the current minute about the difference (DUT1) between atomic and astronomical time, and the remaining seconds convey the time and date code. The time and date code information begins 43 seconds before the corresponding minute marker (second 17 of the previous minute, in the absence of leap seconds), and is always given in terms of UK civil time, which is UTC in winter and UTC+1h when Summer Time is in effect.

In addition to the 500 ms carrier-off minute marker, bits 53A–58A are all set permanently at '1', and are bracketed by bits 52A and 59A at '0'. This sequence 01111110 never appears elsewhere in bit A, so it uniquely identifies the following second 00 minute marker.

Shortcomings of the current signal format

MSF does not broadcast any explicit advance warning of upcoming leap seconds which occur less than once a year on average. The only indication is a change in the number of padding bits before the time code during the minute before the leap second. Therefore, unless a leap-second announcement is manually entered into a receiver in advance, it may take some time until an autonomous MSF receiver regains synchronization with UTC after a leap second (especially if the reception is not robust at the time of the leap second).

The time signal only provides 1 hour warning of summer-time changes.[11]