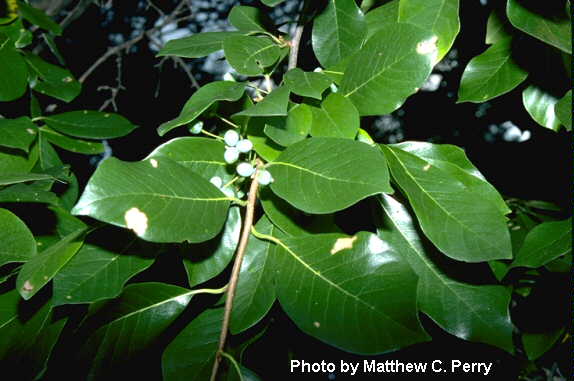 The species is often known as simply Tupelo, but the full name Black Tupelo helps distinguish it from the other species of , some of which ( "N. aquatica" and "N. biflora") occur in the same area. The name Tupelo is of Native American origin. Other names include Blackgum, Pepperidge, Sourgum, and (on ) Beetlebung, this last perhaps from the mallet known as a beetle, used for hammering s, or stoppers, into. The scientific name means "water nymph of the woods" in Latin.

The of Black Tupelo is variable in size and shape. It can be oval, elliptical or obovate, and 5-12 cm (2-5 in) long. It is lustrous, with entire, often wavy margins. The leaf turns purple in autumn, eventually becoming an intense bright scarlet. The is very small, greenish-white in clusters at the top of a long stalk. The is a black-blue, ovoid stone fruit, about 10 mm long with a thin, oily, bitter-to-sour flesh. There are from one to three such fruit together on a long slender stalk. The is dark grey and flaky when young, but it becomes furrowed with age, resembling hide on very old stems. The twigs of this tree are reddish-brown, usually hidden by a greyish skin. The pith is chambered with greenish partitions. The branches typically stand at right angles to the trunk.

The limbs deteriorate early and the decayed holes make excellent dens for s, s, s and s. Hollow sections of trunk were formerly used as bee gums by s.

The glossy beauty of the Tupelo is undoubtedly the reason why it so often is permitted to escape the levelling axe and allowed to standFact|date=June 2008Or|date=June 2008 in the fields with the elm, oak, and maple. In such a situation its contour is as individual as that of any of its companions. The stem rises to the summit of the tree in one tapering unbroken shaft, the branches come out at right angles to the trunk and either extend horizontally or droop a little, making a long-narrow, cone-like head. The spray is fine and abundant and lies horizontally so that the foliage arrangement is not unlike that of the . The leaves are short petioled and so have little individual motion, but the branch sways as a whole.

The tree rarely flourishes in exposed positions, but allowed to grow in freedom, sheltered but not crowded, it develops a full round head and lives to a good age.

The flowers are inconspicuous, but the fruit is quite marked, dark blue, in clusters of two or three, sour but eagerly sought by the birds.

Its autumnal coloring is superb; the foliage becomes one glowing mass of scarlet, sometimes dashed with orange. It is the most fiery and brilliant of all that brilliant group: the maple, dogwood, sassafras, liquidambar, and tupelo.

The wood is hard, cross-grained, and difficult to split, especially after drying. It is used for pallets, rough floors, pulpwood and firewood. It is also grown as an ornamental tree in parks and large gardens, with its often spectacular intense red to purple fall color being highly valued.

The Black Tupelo is an important food source for many migrating birds in the fall. It's early colorchange () is thought to attract birds to the available fruit, which ripen before many other fall fruits and berries.