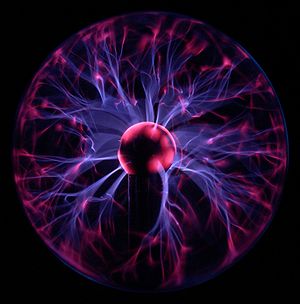 Ionization refers to the process whereby an atom or molecule loses an electron, resulting in two oppositely charged particles, (1) a negatively charged electron and (2) a positively charged ion.

The degree of ionization, or α, is a way of representing the strength of an acid, often represented by the Greek letter alpha. It is defined as the ratio between the number of ionized molecules and the number of molecules dissolved in water. It can be represented as a decimal number or as a percentage. One can classify strong acids as having ionization degrees above 50%, weak acids with α below 50%, and the remaining as moderate acids, at a specified molar concentration.

In gases and plasma, the degree of ionization refers to the proportion of neutral particles that are ionized into charged particles. For example, when electricity passes through a novelty plasma ball, perhaps 1% of the gases are ionized (sometimes referred to as partially ionized). Our Sun and all stars contain largely hydrogen and helium gases, that are fully ionized into electrons, protons (H+) and helium ions (He++).

A gas may begin to behave like plasma when the degree of ionization is as little as 0.01%.[1]

Ionized matter was first identified in a discharge tube (or Crookes tube), and so described by Sir William Crookes in 1879 (he called it "radiant matter").[3] The nature of the Crookes tube "cathode ray" matter was subsequently identified by English physicist Sir J.J. Thomson in 1897,[4] and dubbed "plasma" by Irving Langmuir in 1928,[5] perhaps because it reminded him of a blood plasma.[6]