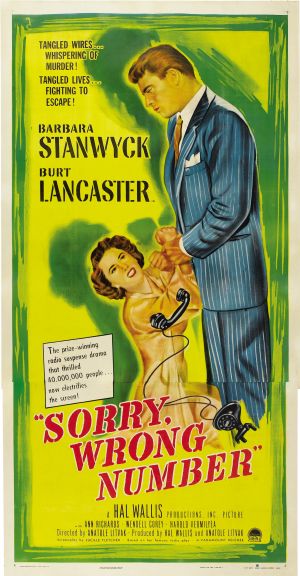 Stanwyck plays Leona Stevenson, a spoiled, bedridden daughter of a millionaire. The telephone is her sole connection with the outside world. One day, while listening to what seems to be a crossed phone connection, she eavesdrops on two men planning a woman's murder. Leona calls the phone company and police, only to be ignored. Adding to Leona's dilemma is the fact that her husband Henry (Lancaster) is missing.

After a number of phone calls, the terrorized Leona begins to piece together the mystery. Her uneducated husband, who works for her wealthy father, turns out to be not all he seems. She finally realizes that "she" is the intended victim.

The movie is shot in real time, with many flashbacks to flesh out the story.

Stanwyck's bedroom window overlooks the night skyline of . The film is shot very dark, with looming shadows and circling camera shots used to maintain a high level of suspense. [ [http://www.noiroftheweek.com/2008/06/sorry-wrong-number-1948.html Film Noir of the Week article] ]

Fletcher's play originally aired on the "Suspense" radio program on May 25, 1943, essentially a one-woman show with as Mrs. Stevenson. The play was reprised seven times, each starring Moorehead. The final broadcast was on February 14, 1960. However, there was another radio version: on January 9, 1950, "" broadcast an adaptation of the film, with Stanwyck recreating her big screen role. [ [http://jayspace2006.blogspot.com/2006/12/sorry-wrong-number-radio-drama.html Jay Space article on the radio program] ]