Simplified scheme of an organization[1] 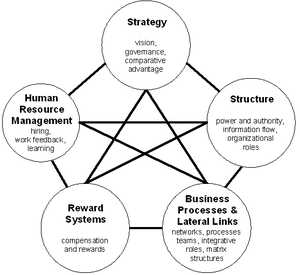 There are various approaches to organizational architecture including

Some systems are effective and efficient whereas others are not. Successful systems may be attributable to the skill exercised in designing the system or to the quality of management practised during operations, or both. Successful systems are characterized by their simplicity, flexibility, reliability, economy, and acceptability.[3] Simplicity, flexibility, and reliability tend to be a function of design, whereas economy and acceptability pertain to both design and operations. Numerous relationships exist among these characteristics; for example, simplicity will affect economy and possibly reliability. Moreover, management must reach a compromise between economy and reliability, and between technical efficiency and organizational climate. The balance reached will determine whether short- or long-run objectives are optimized.

An effective organizational system need not be complex. On the contrary, simplicity in design is an extremely desirable quality. Consider the task of communicating information about the operation of a system and the allocation of its inputs. The task is not difficult when components are few and the relationships among them are straightforward. However, the problems of communication multiply with each successive stage of complexity.

The proper method for maintaining simplicity is to use precise definitions and to outline the specific task for each subsystem. Total systems often become complex because of the sheer size and nature of operations, but effectiveness and efficiency may still be achieved if each subsystem maintains its simplicity.

Conditions change and managers should be prepared to adjust operations accordingly. There are two ways to adjust to a changing operating environment: to design new systems or to modify operating systems. An existing system should not be modified to accommodate a change in objectives, but every system should be sufficiently flexible to integrate changes that may occur either in the environment or in the nature of the inputs. For example, a company should not use the same system to build missiles as it uses to build airplanes, nor the same system to sell insurance as the one originally designed to sell magazines. However, it should be possible to modify an existing system to produce different sizes, varieties, or types of the same product or service.

A practical system must be well designed but it cannot be entirely rigid. There will always be minor variations from the general plan, and a system should be able to adapt to such changes without excessive confusion. The advantages associated with having a flexible system will become more apparent when we consider the difficulty of administering change.

System reliability is an important factor in organizations. Reliability is the consistency with which operations are maintained, and may vary from zero output (a complete breakdown or work stoppage) to a constant or predictable output. The typical system operates somewhere between these two extremes. The characteristics of reliability can be designed into the system by carefully selecting and arranging the operating components; the system is no more reliable than its weakest segment. When the requirements for a particular component — such as an operator having unique skills — are critical, it may be worthwhile to maintain a standby operator. In all situations, provisions should be made for quick repair or replacement when failure occurs. One valid approach to the reliability-maintenance relationship is to use a form of construction that permits repair by replacing a complete unit. In some television sets, for example, it is common practice to replace an entire section of the network rather than try to find the faulty component. Reliability is not as critical an issue when prompt repair and recovery can be instituted.

An effective system is not necessarily an economical (efficient) system. For example, the postal service may keep on schedule with mail deliveries but only by hiring a large number of additional workers. In this case, the efficiency of the postal system would be reduced. In another example, inventories may be controlled by using a comprehensive system of storekeeping. However, if the cost of the storekeeping were greater than the potential savings from this degree of control, the system would not be efficient. It is often dysfunctional and expensive to develop much greater capacity for one segment of a system than for some other part. Building in redundancy or providing for every contingency usually neutralizes the operating efficiency of the system. When a system's objectives include achieving a particular task at the lowest possible cost, there must be some degree of trade-off between effectiveness and efficiency. When a system's objective is to perform a certain mission regardless of cost, there can be no trade-off.

Any system, no matter how well designed, will not function properly unless it is accepted by the people who operate it. If the participants do not believe it will benefit them, are opposed to it, are pressured into using it, or think it is not a good system, it will not work properly. If a system is not accepted, two things can happen:(1) the system will be modified gradually by the people who are using it, or (2) the system will be used ineffectively and ultimately fail. Unplanned alterations in an elaborate system can nullify advantages associated with using the system.

A basic consideration in the design of organizations is dividing work into reasonable tasks (differentiation) while giving simultaneous attention to coordinating these activities and unifying their results into a meaningful whole (integration). Two guidelines may be followed in grouping activities:

When units neither have similar orientations nor share their activities, the task of grouping becomes more difficult. For example, when units are similar in nature and function but are also relatively independent, the manager must base his decision on the most appropriate way to group activities according to his past experience.[4]

A difficult task associated with system-subsystem determination is to establish proper boundaries of operations. The more specific and distinct the goals of the operation, the easier it is to set boundaries. Other factors such as the influence of the environment, the availability of men and machines, the time schedule for design and operation, the cost of alternative designs, and the particular biases of the designers must be considered when establishing boundaries.[4]

The role of management

Designers with imagination have the best chance to group people and machines into workable combinations having the greatest efficiency and effectiveness within the recognized constraints. Certain characteristics should be designed into an effective and efficient system — simplicity, flexibility, reliability, economy, and acceptability.[5]

At this point, the designer must determine what has to be done to achieve the stated objective(s) and how the total task can be divided into meaningful units. Of the many possible combinations, one must be selected as that which satisfies the decision criteria better than the other alternatives. Of course, the balance between technical efficiency and the human factors that determine organizational climate should be included in making this decision. The eventual success or failure of the project is somewhat predetermined by management's attitude and the relationship between the designers and those who must implement the process.[5]

The systems approach suggests a new role for management. In the traditional view, the manager operated in a highly structured, rigid system having well-defined goals, clear-cut relationships, tight controls, and hierarchical information flows. In the flexible (or open) systems view, the organization is not static but is continually evolving to meet both external and internal changes. The manager's role is to develop a viable organization, cope with change, and help participants establish a dynamic equilibrium. Leonard Sayles has expressed the manager's problem as follows:

“The one enduring objective is the effort to build and maintain a predictable, reciprocating system of relationships, the behavioral patterns of which stay within reasonable physical limits. But this is seeking a moving equilibrium, since the parameters of the system (the division of labor and the controls) are evolving and changing. Thus, the manager endeavors to introduce regularity in a world that will never allow him to achieve the ideal”.[6]

The systems approach does not offer a prescription for making a manager's difficult and complex job easier. Rather it helps him understand and operate more effectively within the reality of complex systems. The systems approach suggests that operations cannot be neatly departmentalized but must be viewed as overlapping subsystems. In addition, it suggests that leadership patterns must be modified, particularly when dealing with professionals and highly trained specialists, and motivation must take the form of active, willing participation rather than forceful subjugation.[6]

Systems design involves establishing project and facilitating subsystems to accomplish certain tasks or programs. In this approach, the network of human independence required to accomplish a given task is based on the shared responsibility of all members of the subsystem. In contrast, the traditional organization is geared to functional performance and the integrating force is authority. Instead of gearing participant activities to obedience to rules and closely structured behavior, the systems approach provides a basis for active cooperation in meeting task requirements. The manager is looked upon as a resource person who can help the group meet its goals and also as a source of authority and control. Thus, systems theory lends a structure by which the concepts of motivation, leadership, and participation can be applied effectively within the organization.[6]

Implementation is, of course, implicit in the connotation of systems design; otherwise it would be nothing more than an empty exercise. It follows that the interface between managers and systems designers is critical, and mutual understanding must be fostered to maximize returns from design efforts. The system must be tailored to the needs of the organization and adapted continually as circumstances change. In a general sense, managers engage in systems design on a day-to-day basis when they plan activities and organize systems to accomplish objectives. Specialized staff groups have evolved to perform tasks such as long-range planning, organizational studies, and systems design. However, since managers are ultimately responsible for organizational endeavors, they should make a special effort to help ensure the development of useful systems and to make design activities an extension of the manager's role rather than a separate function.[5]

Operating managers need to understand the organizational decision-making requirements and the information needed to support the system. Although the probability of success in implementation is enhanced considerably if management is vitally interested in the project, technical expertise and motivation for change are more likely to be found in staff groups. The solution to the apparent dichotomy would seem to be a team approach, with specialists supporting operating managers who are responsible for the project's success. A manager might devote either part-time to such an effort or full time temporarily, if the task requires it.

A project involving an integrated system for the entire company might well require years to complete. If operating people are delegated responsibility and authority for such a project, particularly if they are delegated the authority to outline specifications, they should also maintain sufficient contact with the day-to-day operations and its attendant information flow to retain their expertise for decision making. If the environment is dynamic or internal capabilities undergo change, it might be wise to rotate people from operations to systems design periodically, so that operating expertise is updated continually.[5]