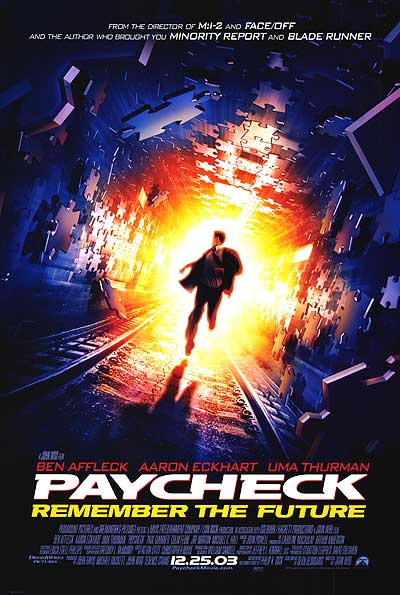 Michael Jennings (Affleck) is a reverse engineer who routinely has his recent memories erased after working on sensitive high-tech projects. He is often helped by his friend Shorty (Giamatti). He agrees to take on a project for James Rethrick (Eckhart), his old college roommate and close personal friend; Rethrick is CEO of Allcom. All Jennings is told is that he is to design something for three years in exchange for Allcom shares which will be worth a minimum of 10 million dollars. He meets and falls in love with Dr. Rachel Porter (Thurman), an Allcom . However, after working for three years on the secret project, he wakes up with his memory erased and learns that he signed away his shares in Allcom, which are worth 92 million dollars. He is left only with an envelope of personal items – most of which he doesn't recognize. It contains the following, seemingly unrelated items:

#a pack of cigarettes (used to escape from the FBI by setting off the fire suppressants in an interrogation room, creating a smoke screen – without it he would have died during interrogation)
#a pair of tinted sunglasses (allows Jennings to see through the smoke, enabling a quick escape)
#a bus pass (the only item common to both the film and original short story; allows Jennings to escape quickly through a bus terminal – the FBI must jump the turnstiles)
#a diamond ring (allows a street kid to steal it; had it not happened, Jennings would not have returned to the law firm where he received the envelope so he could ask more questions about its origins; also used in the in which Jennings proposes to Porter.)
#a fortune from a with lucky numbers printed on the back (winning lottery numbers, and clues to the location of the ticket - proof of the envelope's prophetic nature)
#a janitor's key (allows friend to access circuit breakers, creating a distraction)
#a can of hair spray (used with lighter as a makeshift flamethrower)
#a cigarette lighter (used with hair spray as a makeshift flamethrower)
#a paper clip (used to short-circuit electronics to avoid being hit by subway train)
#a matchbook (specifies a restaurant where he has a reservation, disguised with water-soluble paint as "new liberty saving" bank)
#a key w/ alarm (allows him to identify and utilize a means of escape: an orange and black R1150R Rockster motorcycle)
#a (allows him to notice discrepancy on stamp)
#a postage stamp on the envelope (contains microfilm with snapshots from the future – the fact that it's on the stamp is a clue)
#a small container of (used to set off metal detectors, creating a distraction at security)
#a keycard to Allcom's facility (allows him to re-enter his lab)
#a (used to open lab door security panel)
#an (used to jam lab door security panel)
#a crossword puzzle (locates hardware bug on the machine, allowing him to repair it)
#a .45 Caliber cartridge (used to destroy the machine – fired into hydrogen tank by a cycling piston)
#a watch (alerts him when to duck a bullet)

Soon he discovers that Allcom security personnel (led by Feore) are after him for some unknown reason, as is the , agents of which tell him he committed against the . However, using the items now in his possession, Jennings is able to devise ways out of various predicaments and crises. He soon discovers that he spent the last three years of his life designing and building a -enhanced lens which allows the user to see around the curvature of the universe, and thus, into the future; this was theorized by William Dekker (Serge Houde), who had been killed for his work by Allcom agents. After building the machine, Jennings used it to catch a glimpse of the future, foreseeing his own death by gunshot wound. He also learns that the machine is prone to dispensing (i.e., a plague is predicted – all those it says are infected are isolated in camps with conditions that create the plague. A war is predicted – the enemy it predicts is attacked first thereby causing the war). Ultimately, human responses to the machine's predictions lead to the downfall of humanity. In desperation, Jennings used the machine in an attempt to escape his death and ultimately destroy his creation. However, since he was completely isolated on the Allcom grounds, he was limited to leaving himself an envelope of innocent, everyday items.

Jennings and Porter make their escape after Rethrick is killed by an undercover FBI (with the bullet that, in an alternative future, would have slain Jennings). The future-viewing device is destroyed as is Rethrick's assistant.

The "paycheck" comes at the end of the movie, when Jennings finds a winning 90 million dollar lottery ticket hidden under the lining the bottom of Porter's birdcage. This fulfills the fortune cookie's message from earlier in the film, "If you only look where you can't go, you will miss the riches below."

The movie features several of director Woo's trademarks, including two s and the appearance of a .

Critical reaction to "Paycheck" was mixed. Scott Tobias of 's A.V. Club gave the film a positive review, calling it a "smart thriller" and praising "Woo's wonderful sense of timing and rhythm." [ [http://www.avclub.com/content/node/17431/print Review by Scott Tobias] , The A.V. Club] Chris Barsanti of also praised "Paycheck", calling it "one of the more competent and reassuring action movies to come out for quite some time." [ [http://www.filmthreat.com/index.php?section=reviews&Id=5321 Review by Chris Barsanti] , Film Threat]

gave the film two stars (out of four), saying that he "enjoyed the movie" but felt that it "exploits [Philip K. Dick's story] for its action and plot potential, but never really develops it." [ [http://rogerebert.suntimes.com/apps/pbcs.dll/article?AID=/20031224/REVIEWS/312240305/1023 Review by Roger Ebert] , Chicago Sun-Times] K. J. Doughton of called the film "John Woo lite," and a "neutered variation on his earlier, superior works." [ [http://www.filmthreat.com/index.php?section=reviews&Id=5404 Review by K. J. Doughton] , Film Threat] gave the film one and a half stars out of four, calling it "a bad film, complete with lackluster acting, brainless writing, and uninspired direction." [ [http://www.reelviews.net/movies/p/paycheck.html Review by James Berardinelli] , ReelViews]

Ben Affleck won Worst Actor from the for his work in the movie, as well as in "Gigli" and "Daredevil". After asking why he did not get his trophy, he was presented the Razzie live on "" a week later, which he promptly broke. The broken Razzie sold on for enough money to cover the hall rental for the following year's ceremonies. While hosting "", Ben Affleck commented that he would have walked out of the premiere until he realized he was in the movie.