Naseby is a small village in the District of Daventry in Northamptonshire, England.

The village is 14 mi (22.5 km) north of Northampton, 13.3 mi (21.4 km) northeast of Daventry, and 7 mi (11 km) south of Market Harborough. It is 2.4 mi (3.9 km) from Junction 2 of the A14 road, giving it access to the national road system. For rail travel, the Midland Main line can be accessed at the railway station in Market Harborough. There is a bus service between Market Harborough and Northampton that stops in Naseby, but it is very infrequent.

The village sits in a commanding position on one of the highest parts of the Northamptonshire Uplands, close to the county border with Leicestershire.

The original settlement probably owes its existence to its geography; the village lay in what was known as a 'string defensive' position. In the 6th century an Saxon named Hnaef established the settlement with the name of Hnaefes-Burh ("fortified place of Hnaef"). Evidence for these origins came in the form of a 19th-century discovery of an Anglo-Saxon trefoil-headed brooch which is now in the collection of the British Museum.

Domesday Book to the Black Death 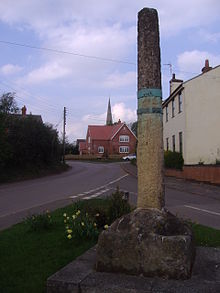 In 1086 Naseby appeared in the Domesday Book, by which time Hnaefes-Burgh had evolved into Navesberie. In later records the village had been known as Navesby and Nathesby, eventually becoming Naseby. It is interesting to note that it was believed that the name derived from the Old English naefela, meaning navel, because it was thought to be the navel of England. In 1203, King John granted Naseby its market charter and the village became a flourishing market town for many years.

The Battle of Naseby took place on June 14, 1645, during the English Civil War. In the area called Broad Moor a small distance north of the village the Royalist forces, commanded by King Charles I, battled the Roundhead army commanded by Thomas Fairfax, 3rd Lord Fairfax of Cameron. The battle resulted in a decisive Royalist defeat.

Surprisingly, the village records omit any mention this event, and the parish register of 1645 makes absolutely no mention to the battle, with the vicar only recording one birth in the parish on the day of the battle.

A naval warship during the Commonwealth period was named the Naseby in honor of the battle; after the Restoration the ship was renamed HMS Royal Charles.

During the 18th century, Naseby continued as an agricultural community and during this time several fine Georgian buildings were constructed in the parish, including Manor Farm (built 1720), Shuckburgh House (1773), and the old Vicarage (1785). One of the most significant buildings is Naseby House, built in 1818 for the Fitzgeralds, Lords of the Manor. In the 20th century the hall hosted the Duke of York, later King George V, with the Duchess of York, Elizabeth Bowes-Lyon (the Queen Mother) and a very young future Queen Elizabeth. Naseby Hall was badly damaged by fire in 1948, and was rebuilt from the ground up. In 1822 the Enclosure commissioners allocated the open land around the village to two landowners, who duly fenced off their newly-acquired fields. This action deprived many of the villagers of their traditional plots of land that surrounded the village, that had for years allowed them to grow crops and graze their cattle and sheep.

This action did not adversely affect the community as much as it did in other villages; one reason may have been that the village had other trades. A survey of the time lists 26 different occupations and trades in the village. 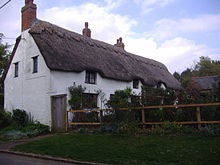 Until around 1870, most buildings (except for the church, chapel, school, and the three houses from the Georgian period) were made of mud walls and cob with thatched roofs. During the 1870s Lord Clifden had most of the cottages demolished and replaced with new red-brick cottages, some of which were semi-detached, to house his estate workers. This gave Naseby its well-known Victorian appearance. All these Victorian houses still survive to this day, along with two remaining 17th-century cob and thatched cottages.

Parish church of All Saints

All Saints Church at Naseby has roots dating all the way back to the Saxon period, and there may have been a Christian settlement here as early as 620. The present church dates from the early 13th century. The south aisle was added to the Saxon church in 1232, and the present nave and north aisle added over the next 75 years. In the 15th century the walls of the church were raised and a clerestory, low tower, and spire added. A new spire was built in 1860, from which it is said that The Wash and the towers of 40 churches can be seen on a clear day.

A curious remnant of Naseby's history can be found leaning against the outer wall of the North Aisle. It is "Cromwell's Table", which originally graced Shuckborough House, just opposite the church. The story goes that on the eve of the Battle of Naseby some of the king's lifeguards were sitting down to supper at the table when they were surprised by Cromwell's troops. Several of the royal soldiers were killed, and the rest captured. Their duty done, Cromwell's men sat down at the table and finished the meal! 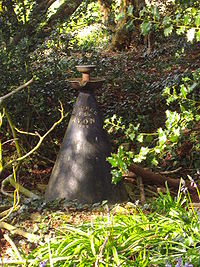 Naseby and the plateau of land towards Sibbertoft form a watershed and source for four rivers flowing west, south and east.

Manor Farm at the junction of Church Street, Newlands and Welford Road, is a Grade II listed building built in 1720. In the front garden of Manor Farm is a cone-shaped monument which sits in a depression. This is the source of the River Avon, Warwickshire, associated with William Shakespeare.

The northern tributary of the River Nene (Brampton Arm) arises by the Thornby road to the west of the village (the main Source being at Arbury Hill (SP 542 581) near Staverton, Northamptonshire).

The source of the River Ise can be found close to Sibbertoft Road to the north of Naseby.

The source of the River Welland can be found in fields close to Welland Rise, Sibbertoft village, three miles to the north. 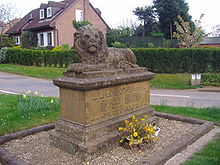 At the junction of the village at the junction of Church Street and Gynwell, close to the Methodist Chapel (1825) there is the shaft of the old whipping post dating to 1203. In the Middle Ages this stood opposite the church in what was the marketplace and is now the village street called Newlands.

also to be found in Newlands are examples of the Victorian cottages from around 1870, which continue down the right-hand side of High Street; further down the street to the right is one of the two surviving cob-thatched cottages. It was built around 1630 and is now called Cromwell Cottage. Next door to the cottage in School Lane is the village school, built in 1843.

Further down School Lane are more Victorian cottages. At the end of School Lane with its intersection with Church Lane, is the village War Memorial. This memorial, built in 1918 to commemorate World War I, is a smaller copy of one of Edwin Henry Landseer's four lions at Nelson's Column in London's Trafalgar Square. On the opposite side of Church Street from the memorial is the Old Vicarage, built around 1785. The two beech trees at the entrance were planted in 1792. Next to the Vicarage is Shuckburgh House which dates from around 1773. The other surviving cob thatched cottage can be found at the southern end of the High Street.