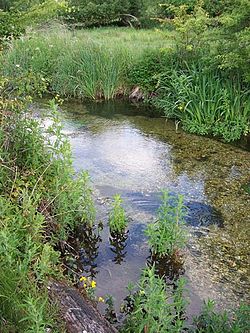 The River Bourne at Winterbourne Gunner, a typical chalk stream 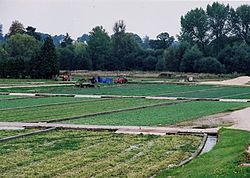 Chalk streams have characteristics which set them apart from watercourses associated with other rock types.

Aside from those with an interest in the geological and ecological disciplines, the term chalk stream is most widely used among a small group of fly fishermen (who fish for trout on these rivers utilizing a specific type of artificial fly and their attendant techniques), as the ecology of the chalk streams creates an especially entertaining variation on the general theme of fly fishing.

Chalk geology is porous, and rain falling onto chalk hills percolate directly into the ground, where the chalk acts as an aquifer. The water filters through the chalk, re-emerging lower down the slope in springs. The chalk acts as a temporary reservoir by regulating the amount of water supplied to the springs. This is why many chalk streams in the UK have stable flow regimes that vary only slightly over time. The temperature of the emerging surface water is fairly stable and rarely deviates from 10°C (50°F). On cold winter mornings, it can look as though steam is rising above the relatively warm river.

Chalk is a soluble geology in rainwater because rain is naturally slightly acidic. The products of chalk weathering are dissolved in rainwater and are transported in stream flow. Chalk streams transport little suspended material (unlike most rivers), but are uniquely mineral-rich. The surface water of chalk streams is commonly described as 'gin clear'. The channel bed consists of angular flint gravel derived from the natural flint deposits found embedded within the chalk geology that is characteristically free from fine sediment deposits.

The unique characteristics of chalk stream ecology are due to stable temperature and flow regimes combined with highly transparent of water and lack of sand grade sediment particles.

The chalk streams have been intensively managed for many generations. In the twentieth and twenty-first centuries, much of that management has been aimed at producing the best conditions for fly fishing, and most specifically, dry fly fishing. The chalk streams hold a good number of wild salmonid fish species such as the brown trout (Salmo trutta), Atlantic salmon (Salmo salar) and grayling (Thymallus thymallus). In addition to these there are also considerable numbers of stocked brown trout and stocked rainbow trout (Oncorhynchus mykiss). The rich invertebrate life and characteristic transparent shallow water make chalk rivers and streams particularly suited to fly fishing.

Many of the chalk stream springs are also used as sites for watercress production, due to the constant temperature and clean, alkaline, mineral-rich spring water. The Mid Hants Watercress Railway in Hampshire is so named on account of its use for transporting watercress to London from local chalk streams. A number of the chalk aquifers and associated groundwater sources related to chalk streams and rivers are used for water abstraction by local and national water utility companies.

Chalk stream is a term generally applied to all watercourses originating from chalk hills, including winterbournes, streams and rivers. The term chalk stream is used even for larger rivers, which would normally be too large for the term stream.

See Somme River for a hydrological view of a chalk stream on a larger scale.

Chalk streams of the Southern England Chalk Formation in the Chiltern Hills (tributaries of the River Thames and River Colne):

Chalk streams of the Yorkshire Wolds:

Chalk streams of the Lincolnshire Wolds: