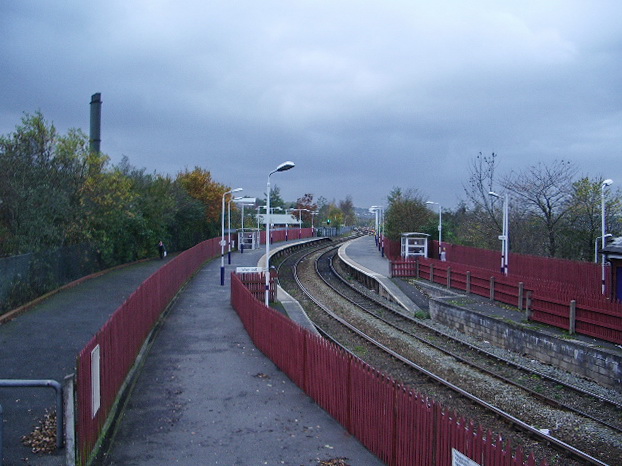 Accrington railway station serves the town of in , UK. It is a station on the 10 km (6¼ miles) east of operated by .

It is also served by express services between Blackpool North, York and Leeds.

The station was opened in 1848 by the East Lancashire Railway, which amalgamated with the in 1859. Taken into the during the Grouping of 1923, the line then passed on to the on in 1948.

The station was formerly a major junction on the ELR, with the line to Bury and Salford diverging southwards from that towards Blackburn & Preston at the western end of the station, just before the impressive viaduct that carries the line over the town centre. This was for many years a busy commuter route carrying regular trains from Skipton and Colne to , but it fell victim to the in the sixties and closed to passengers on [Marshall p.40] . Few traces of this route remain today, the formation through the town (including part of the notorious 1 in 40 Baxenden Bank) having been built over.

When Sectorisation was introduced, the station was served by until the Privatisation of British Railways.

There is an hourly service from Accrington to Blackpool North (westbound) and Leeds/York (eastbound) on the Caldervale Line, two-hourly Sundays.

On the East Lancashire Line, Monday to Saturday daytimes, there is an hourly service from Accrington to Blackpool South (westbound) and Colne (eastbound). There's a two-hourly service in each direction on Sundays. These call at all stops (except Salwick), including the major stations of Preston, Blackburn and Burnley Central.