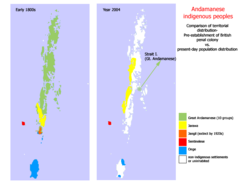 Distribution of the Onge (blue)

The Onge (Hindi: ओन्गी), also Önge or Ongee, are one of the Andamanese adivasi indigenous peoples of the Andaman Islands, located in the Bay of Bengal. They are sometimes classified as "Negritos". They were formerly distributed across Little Andaman Island and the nearby islets, with some territory and camps established on Rutland Island and the southern tip of South Andaman Island. This semi-nomadic tribe used to be fully dependent on hunting and gathering for food.

The semi-nomadic Onge have a traditional story that tells of the ground shaking and a great wall of water destroying the land. Taking heed of this story, all 96 tribesmen of the semi-nomadic Onge survived the tsunami caused by the 2004 Indian Ocean earthquake, by taking shelter in the highlands.[5]

In December 2008, eight male tribal members died after drinking what turned out to be a toxic liquid—identified as methanol by some sources—that they had apparently mistaken for alcohol. The toxic liquid apparently came from a container or bottle that had been washed ashore at Dugong Creek near their settlement on the island, according to reports; however, authorities in Port Blair ordered an investigation into the matter to determine whether the poison had originated somewhere else. A further 15 Onge were taken to hospital with at least one critically ill.[6]

With their population estimated at only around 100 before the incident, the deaths and illnesses represented a literal decimation of their numbers. The director of Survival International described the mass poisoning as a "calamity for the Onge", and warned that any more deaths could "put the survival of the entire tribe in serious danger." Alcohol and alcohol addiction has in recent years developed into a serious problem for Onge, adding to the threats to their continued survival posed by outside influences.[6]

Bhopinder Singh, the Lieutenant Governor of the Andaman Islands, has ordered an inquiry into the incident.[7]