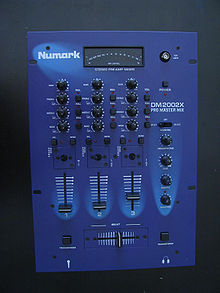 A DJ mixer is a type of audio mixing console used by disc jockeys. The key features that differentiate a DJ mixer from other types of audio mixers are the ability to redirect (cue) a non-playing source to headphones and the presence of a crossfader, which allows for an easier transition between two sources. DJ mixers are also used to create DJ mixes.

A typical modern DJ mixer generally has between two and six stereo channels for connecting and mixing audio sources. Each channel usually has a phono input with RIAA equalization for turntables and one or two line level inputs for sources such as CD players. Controls for individual channels are arranged in vertical columns (channel strips), starting with a switch or a knob selecting between the inputs. Below the input selector is a gain (or trim) control, used to match signal levels between channels. Next follows an equalizer section, used to fade parts of tracks in and out; a common basic technique is to kill the bass on one channel while mixing so the basslines of two tracks don't clash. A typical mixer features separate knobs for the low, mid and high frequency ranges. Some more controls may follow, such as a balance knob, built-in sound effects and aux-sends for external effects units. Below there's normally a cue switch sending the signal to the headphones, letting the DJ preview and beatmatch a track without sending it to the master output, but on some mixers there's a different way to select the cued source. The channel strip ends with a fader which sets the channel's signal volume in the final mix. The signal may pass through a crossfader. On simple mixers there are normally two channels assigned opposite ends of the crossfader, sometimes with a button to reverse the crossfader's direction. More advanced mixers have assignable crossfaders in which each channel can be assigned to either end of the crossfader or to bypass the crossfader entirely. Many scratch mixers have a crossfader curve control that effectively changes the distance the crossfader needs to travel to open the channel fully, letting to shorten it to a millimetre or two, which is useful for speedy scratching.

Additionally, one or two microphone inputs may be present to accommodate MCs. These can be configured either as additional inputs to main channels or as special microphone channels which are similar in structure, but normally have fewer controls and are often monaural. Most DJ mixers feature peak meters to aid matching levels between channels and monitor the signal for clipping. Usually there are peak meters for master mix and cued mix, though sometimes per-channel meters are present. A DJ mixer has one or two headphone jack plugs and a headphone volume control. Headphones are normally used to monitor a cued channel, but on some mixers other variants are possible, such as split cue where cued channels are sent to the left headphone channel and master mix to the right, or a way to select between cued channels and master mix. Normally there are two or more outputs for the master mix, used to send the signal to an amplifier or another mixer for the public address system, to a loudspeaker in the DJ booth for monitoring the mix, or to a tape recorder or a computer for recording. There may be one volume control for all outputs or separate controls for each outputs. Sometimes a recording output doesn't have a volume control.

One of the pioneers of DJ mixing equipment design was Rudy Bozak.

Beatmatching and beatmixing with a DJ mixer were first used to ensure dancers didn't leave the dancefloor between songs.

More recently DJ mixers have been used to for harmonic mixing.