The show was created as a parody of daytime soap operas, presented as a weekly half-hour prime time comedy. Similar to a soap opera, the show's story was presented in a serial format and included melodramatic plot elements such as amnesia, alien abduction, demonic possession, murder and kidnapping. In 2007 it was listed as one of Time magazine's "100 Best TV Shows of All-TIME,"[2] and in 2010, the Tates and the Campbells ranked at number 17 in TV Guide's list of "TV's Top Families".

The show was created, written, and produced by Susan Harris. Each returning season was preceded by a 90-minute retrospective of the previous season. Two of these retrospectives were made available on VHS in 1994.[3]

The show aired for four seasons and 85 episodes. The final four episodes of the series aired as one-hour episodes during the original run on ABC. These hour-long episodes were later split in two, yielding 93 half-hour episodes for syndication.

All episodes are currently available on region 1 DVD in four separate box sets. In the past, the series has rerun on local syndicated channels as well as on cable on Comedy Central and TV Land. It currently runs on over the air television, on Antenna TV on Sunday nights

The cast included three former soap opera actors. Robert Mandan (who played Chester Tate) had previously appeared on Search for Tomorrow as a leading man for Mary Stuart, and Donnelly Rhodes (who played Dutch Leitner) had played the first husband of Katherine Chancellor on The Young and the Restless. Arthur Peterson, Jr. ("The Major") played Rev. John Ruthledge in the radio version of Guiding Light. 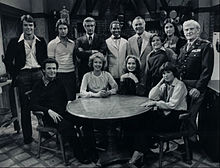 Soap is set in the fictional town of Dunn's River, Connecticut.

In the opening sequence of the first installment, the announcer says that the Tates live in a wealthy neighborhood. Jessica Tate and her husband, Chester, are hardly models of fidelity, as their various love affairs result in several family mishaps, including the murder of her sister Mary's stepson, Peter Campbell (Robert Urich). Even though everyone tells Jessica about Chester's affairs, she does not believe them until she sees his philandering with her own eyes: while out to lunch with Mary, Jessica spots Chester necking with his secretary. Heartbroken, she sobs in her sister's arms. On later occasions, it becomes clear Jess has always known on some level about Chester's affairs but never allowed herself to process the information.

Mary's family, the Campbells, are working class, and as the series begins, her son Danny Dallas, a product of her first marriage to Johnny Dallas, is a junior gangster-in-training. Danny is told to kill his stepfather, Burt Campbell, Mary's current husband, who, Danny is told, murdered his father Johnny. It is later revealed that Danny's father was killed by Burt in self-defense. Danny refuses to kill Burt and goes on the run from the Mob in a variety of disguises. This eventually ends when Elaine Lefkowitz (played by Dinah Manoff in one of her earliest roles), the spoiled daughter of the Mob Boss (played by Sorrell Booke), falls in love with Danny and stops her father, who then tells Danny he will have to marry Elaine or he will kill him. In the fourth season, it is revealed that Chester is, in fact, Danny's true father, the product of a secret affair between him and Mary before his marriage to Jessica.

The first season ends with Jessica convicted of the murder of Peter Campbell. The announcer concludes the season by announcing that Jessica is innocent, and that one of five characters – Burt, Chester, Jodie, Benson or Corinne – killed Peter Campbell. Chester later confesses to Peter's murder and is sent to prison. He is soon released after a successful temporary insanity defense.

Other plot lines include Jessica's adopted daughter Corinne courting Father Tim Flotsky, who ended up leaving the priesthood, and the two eventually marrying and having a child who is possessed by the Devil; Chester being imprisoned for Peter's murder, escaping with his prison roommate Dutch, and being afflicted with amnesia after a failed operation; Jessica's other daughter, Eunice, sleeps with a married congressman, and then falls in love with Dutch; Mary's stepson Chuck, a ventriloquist whose hostilities are expressed through his alter ego, a quick-witted dummy named Bob; Jessica's love affairs with several men, including Donahue, a private investigator hired to find the missing presumed-dead Chester, her psychiatrist, and a Latin American revolutionary known as "El Puerco" ("The Pig"; his friends just call him "El"); Billy Tate's confinement by a cult called the "Sunnies" (a parody of Sun Myung Moon's Unification Movement, called the "Moonies" by its critics), and then his affair with his school teacher who becomes unhinged; Danny and his romantic trials with the daughter of a mobster, a black woman, a prostitute, and Chester's second wife, Annie; and Burt's confinement to a mental institution, his abduction by aliens while being replaced with an oversexed alien look-a-like on Earth, and getting blackmailed by the Mob after becoming sheriff of their small town.

At the beginning of each episode, off-camera announcer Rod Roddy gives a brief description of the convoluted storyline and remarks, "Confused? You won't be, after this week's episode of...Soap". At the end of each episode, he asks a series of life-or-death questions in a deliberately deadpan style—"Will Jessica discover Chester's affair...? Will Benson discover Chester's affair? Will Benson care?" and concludes each episode with the trademark line, "These questions—and many others—will be answered in the next episode of...Soap."

Writer Susan Harris developed a story arc for five seasons of Soap, but the series was canceled after its fourth season, due to declining ratings. Therefore the final episode, which originally aired on April 20, 1981, did not serve as a series finale and instead ended with several unresolved cliffhangers. These involve a suicidal Chester preparing to kill Danny and Annie after catching them in bed, Burt preparing to walk into an ambush orchestrated by his political enemies, and Jessica about to be executed by a Communist firing squad.

A 1983 episode of Benson mentions Jessica's disappearance, noting the Tate family is seeking to have her declared legally dead. In the episode, Jessica appears as an apparition whom only Benson can see or hear and reveals to him that she is not dead, but in a coma somewhere in South America. No other incidents from the final episode of Soap are mentioned. 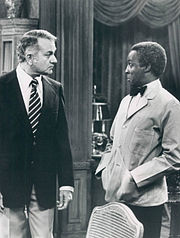 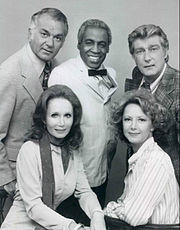 The Tates and Campbells with Benson.

The show was controversial during its time, often generating criticism for its relatively frank depictions of homosexuals, racial and ethnic minorities, the mentally ill as well as its treatment of other taboo topics such as social class, marital infidelity, impotence, incest, sexual harassment, rape, student-teacher sexual relationships, kidnapping, organized crime, and new age cults.

Much of the criticism focused on the openly gay character of Jodie Dallas (Billy Crystal). Soap was among the earliest American prime time series to include an openly gay character who was a major part of the series. Social conservatives opposed the character on religious grounds, while some gay rights activists were also upset with the character of Jodie, arguing that certain story developments reinforced negative stereotypes, i.e. his desire to have a sex change operation, or represented a desire to change or downplay his sexual orientation.

A number of organizations then mobilized against Soap, including the Christian Life Commission of the Southern Baptist Convention, the International Union of Gay Athletes,[4] and the National Gay Task Force.[5] Also mobilized were the National Council of Churches, the United Church of Christ, the United Methodist Church, and the National Council of Catholic Bishops, although they asked the members of their 138,000 collective churches to watch the show first, and then inform ABC of their feelings about it. Nonetheless, the network reportedly received 32,000 letters of complaint before the show's premiere, and eight out of 195 ABC affiliates refused to air the show.[6]

Much of Soap's controversy, among liberals and conservatives alike, ironically actually helped to sell the series. In June of 1977, a Newsweek review of the show's pilot by Harry F. Waters panned the show while mischaracterizing some of its basic plot elements and offering exaggerated reports of its sexual content.[citation needed] Waters also stated:

Soap promises to be the most controversial network series of the coming season, a show so saturated with sex that it could replace violence as the PTA's Video Enemy No. 1."[7]

Whether Waters' errors and misrepresentations were intentional or accidental is unresolved.

On Tuesday, September 13, 1977, Soap premiered to an audience of 19 million homes (39% of the national audience). Executives at ABC described initial public reaction as "mild."

Vlasic Foods pulled their sponsorship of the program shortly after the episode aired.

Harry F. Waters' 1977 review proved prescient of conservative reaction when the following year, the National PTA declared Soap one of "ten worst" shows in television. In spite of this designation, Soap went on to garner positive critical reviews and high ratings over its four year run.