Chatham House Grammar School, often abbreviated to "Chatham House" is a grammar school in Ramsgate, Kent, England, founded in 1797 as a private boy's boarding school by William Humble, under the name Humbles Boys' School.[1] The main building of the school as well as the railings are grade II listed.[2]

The school has 813 students including the 262 students in the sixth form, accepting only boys in years 7-11, and a limited number of girls in the sixth form, mostly drawn from the Isle of Thanet that encompasses Ramsgate, Broadstairs and Margate, but some from as far away as Herne Bay. It is situated just south of the junction of the A255 and the A254.

On the 4 March 2008, the school had an Ofsted inspection which rated the school as outstanding - the highest grade achievable.[3] All areas that were inspected were found to be Grade 1 (outstanding) or Grade 2 (good) and the school was praised for its work.

Its 'sister school,' Clarendon House Grammar School, is a girls' school, only a few minutes walk from this complex. The two work together to provide subjects, bands, and outings. Clarendon, like Chatham House, allows both boys and girls into the sixth form (Year 12 and 13).

The school motto is "Floreat Domus Chathamensis", which translates as "may Chatham House flourish".[4]

When Ramsgate was bombed during World War II, a bomb hit the school library (where a skylight now stands) but did not detonate. Prior to that, the library had been the school chapel, as evidenced by the quantity of stained glass.

The school had numerous entrances to the network of tunnels running under Ramsgate which were used during the second world war to shelter from air raids. Most of these entrances have now been covered up (now underneath the playing fields) but the last ones are still visible on the lower playground and have been used recently by the local fire authorities for training purposes.

The school maintains a strict system of uniform throughout all years, including the sixth form. The uniform consists of a dark green blazer, dark trousers, white shirt and a green tie.

In the senior school (years 9-13) the colour of the tie remains green, but patterned with diagonal stripes to indicate house (colours shown below).

Some pupils also become eligible to wear ties in recognition of other achievement. House 'colours' are similar to the house tie but with a white stripe running along each side of the coloured stripe. School 'colours' are a single white school crest on a dark green tie with a white stripe. There are also 'colours' for sport and music, which consist of a repeating pattern of white stripes and the school crest and are earned by representing the school's first team in 75% of the matches in a season. 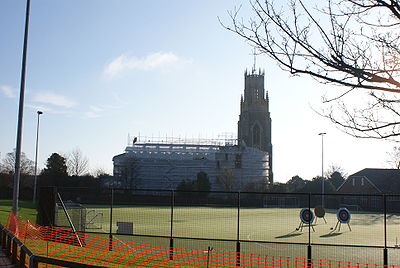 Senior Houses - all use a dark green tie with coloured stripes

The house system is used for sporting events - house fixtures results accumulate over the academic year - and for various other competitions, including acting and design contests. The results from all of these fixtures are tallied at the end of the year to determine the winner of the Cock House Trophy.

Throughout the school year, the house take part in competition cups, which contribute points toward the Cock House Cup. These include, the Taylor acting cup, Larkin Music Cup, Chapman Design Cup and the Curzon Picture debating competition. Also, sports day events and general achievement contribute towards the houses's points totals. 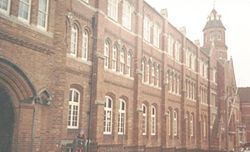 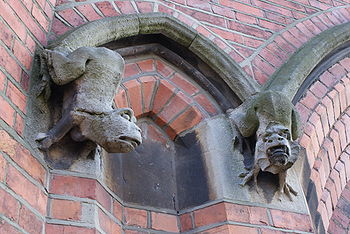 A pair of Grotesques; characteristic of the school's Gothic Revival style architecture.

The school was recently awarded specialist Science, Mathematics and IT status and construction of an extension to the Redman Wing to house extra classrooms and IT facilities was recently completed. There is a heavy emphasis on IT facilities within the school with plenty of state of the art equipment available for use by students and staff alike.

In Spring 2011 it was announced that the schools will work together as one school. Year 7, 8 and 9 pupils will be based at Chatham House and year 10 and 11 pupils will be based at Clarendon. The CCVI sixth form centre will be based on both sites with all lessons being split between them. In this intermediate stage, Year 9 will be moved to the lower school while the decisions about houses are being taken. As the two schools are becoming one, the house system will need to change as Clarendon has 4 houses for the entire school with Chatham having 4 different houses in the lower and upper school. The naming of the new houses is currently being voted in, with options being twin Clarendon and Chatham houses, pick two "lost" houses from each school or rename them based on historic places in Ramsgate. Although it has not been decided on what will happen to the houses, It was announced that the new house colours will be Red, Blue, Silver and Gold.

Alumni of Chatham House are known as Old Ruymians.[5] Chatham House has the sixth highest number of Who's Who entries for state schools.[1] 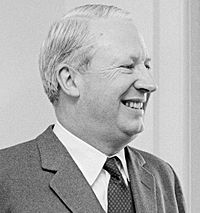