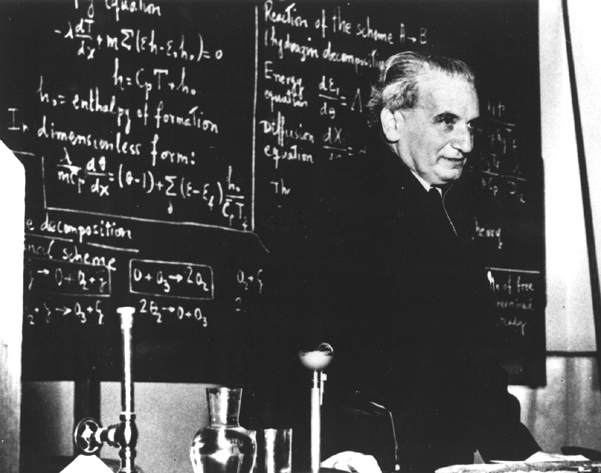 Theodore von Kármán (original Hungarian name Szőllőskislaki Kármán Tódor) (11 May 1881 in &ndash; 7 May 1963 in ) was a Hungarian-German-American and who was active primarily in the fields of and . He is personally responsible for many key advances in , notably his work on and airflow characterization.

Von Kármán was born into a ish family at , as Kármán Tódor. One of his s was . [] He studied engineering at the city's Royal Technical University, known today as . After graduating in 1902 he joined at the , and received his doctorate in 1908. He taught at Göttingen for four years. In 1912 accepted a position as director of the Aeronautical Institute at , one of the country's leading universities. His time at RWTH Aachen was interrupted by service in the 1915&ndash;1918, where he designed an early . He left RWTH Aachen in 1930.

Apprehensive about developments in Europe, in 1930 he accepted the directorship of the at the (GALCIT) and emigrated to the United States. In 1936, along with and , he founded a company to manufacture rocket motors. He later became a naturalized citizen of the United States.

German activity during increased U.S. military interest in rocket research. During the early part of 1943, the Experimental Engineering Division of the Materiel Command forwarded to von Kármán reports from British intelligence sources describing German rockets capable of reaching more than convert|160|km|mi|abbr=on. In a letter dated 2 August 1943 von Kármán provided the Army with his analysis of and comments on the German program. [cite web | url = http://www.redstone.army.mil/history/pdf/corporal/corp1.pdf | title = Development of the Corporal: the embryo of the army missile program, vol. 1 | pages = page 26 | publisher = Army Ballistic Missile Agency|format=PDF]

In 1944 he and others affiliated with GALCIT founded the , which is now a managed and operated by Caltech under a contract from . In 1946 he became the first chairman of the which studied aeronautical technologies for the United States Army Air Forces. He also helped found , the aerodynamics research oversight group (1951), the (1956), the (1960), and the in (1956).

In June 1944, von Kármán underwent surgery for intestinal cancer in . The surgery caused two s, and von Kármán's recovery was slow. He returned to Pasadena around mid-September. Early in September, while still in New York, he met with U.S. Army Air Forces Commanding General on a runway at . Hap Arnold then proposed that von Kármán move to to lead the Scientific Advisory Group and become a long-range planning consultant to the military. Von Kármán was appointed to the position on 23 October 1944, and left Caltech in December 1944. [cite web | url = http://www2.jpl.nasa.gov/files/universe/un940715.txt | title = Von Karman, Malina laid the groundwork for the future JPL | first = John | last = Bluth | publisher = JPL]

Kármán's fame was in the use of mathematical tools to study fluid flow, and the interpretation of those results to guide practical designs. He was instrumental in recognizing the importance of the swept-back wings that are ubiquitous in modern . Von Kármán, who never married, died while on a visit to , Germany, in 1963. [cite web | url = http://jpl.nasa.gov/about_JPL/jpl101.pdf | title = JPL 101 | publisher = JPL|format=PDF] Craters on and the are named in his honor.

In 1956 von Kármán founded a research institute in , , which is now named after him: the .

* At age 81 von Kármán was the recipient of the first , bestowed in a ceremony by President . He was recognized, "For his leadership in the science and engineering basic to aeronautics; for his effective teaching and related contributions in many fields of mechanics, for his distinguished counsel to the Armed Services, and for his promoting international cooperation in science and engineering." [cite web | url = http://www.nsf.gov/od/nms/recip_details.cfm?recip_id=375 | title = The President's National Medal of Science: Recipient Details | publisher = NSF]
* Each year since 1960 the has awarded to an individual the "Theodore von Karman Medal", "in recognition of distinguished achievement in engineering mechanics." [cite web | url = http://www.asce.org/pressroom/honors/honors_details.cfm?hdlid=74 | title = Theodore von Karman Medal | publisher = ASCE]
* In 2005 von Kármán was named an Honorary Fellow of the (AEDC). Fellows of the AEDC are recognized as, "People who have made exceptionally distinguished contributions to the center's flight testing mission." [cite web | url = http://www.arnold.af.mil/library/fellowsnominations.asp | title = AEDC Fellows | publisher = Arnold Air Force Base]