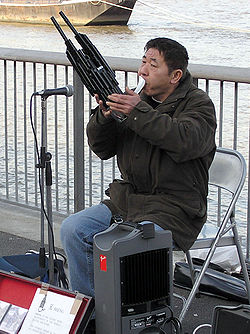 Traditionally, the sheng has been used as an accompaniment instrument for solo suona or dizi performances. It is one of the main instruments in kunqu and some other forms of Chinese opera. Traditional small ensembles also make use of the sheng, such as the wind and percussion ensembles in northern China. In the modern large Chinese orchestra, it is used for both melody and accompaniment

The sheng has been used in the works of a few non-Chinese composers, including Lou Harrison, Tim Risher, Daniel Bjarnason, Brad Catler, and Christopher Adler.

Some believe that Johann Wilde and Pere Amiot traveled to China and brought the first shengs to Europe in 1740 and 1777 respectively,[1] although there is evidence that free reed musical instruments similar to shengs were known in Europe a century earlier.[2]

Chinese free reed wind instruments named he and yu were first mentioned in bone oracle writing dating from the 14th–12th centuries BC, and were identified in later texts as types of sheng. The first appearance of the word "sheng" is in the Shijing (Book of Odes) c. 7th century BC. Ancient instruments with gourd wind chambers, varying numbers of pipes, with bamboo or metal reeds have been discovered in archaeological finds at the tomb of the Marquis Yi of Zeng (c. 433 BC) in present day Hubei province, and the Han tombs at Mawangdui (c. 2nd century BC) in Hunan province.

In the eighth century, three yu and three sheng were sent to the Japanese court and these have been preserved in the Shōsōin imperial repository in Nara. All the instruments had 17 pipes with a long curving mouthpiece and are very similar to the traditional sheng in use today. However variants with different numbers of pipes, and chromatic instruments have been documented over the centuries.

The sheng's reeds vibrate at a fixed frequency, unlike single reeds, double reeds and pointed free reeds which vibrate at the pitch according to the length of the attached air column. Covering a hole on the sheng's pipe causes the entire length of the pipe to resonate with the reeds' frequency. If the hole is open, the resonance frequency would not match, and hence no sound is produced.

The sheng is played by alternately blowing and inhaling, and a player can produce a continuous sound without pause. The traditional performance style is to sound two or three notes at the same time by adding a fifth and/or octave above the main melody note. When a higher note is not available, a lower note a fourth below the main melody note can be played instead.

Shengs can be classified into traditional sheng (传统笙; pinyin: chuántǒng shēng) and keyed sheng (键笙; jiàn shēng). Keyed shengs have only been developed in the 20th century, c. 1950 onwards.

The difference between a traditional and keyed sheng lies in its mechanism. On a traditional sheng, the holes on the finger pipes are pressed directly by the player's fingers. On a keyed sheng, the holes are opened and closed by means of keys or levers. Without keys, the great number of pipes, and the size of the larger instruments makes it impractical for operation by hand.

The traditional sheng (传统笙, pinyin: chuántǒng shēng) used in, for example, northern Chinese ritual music, kunqu and Jiangnan sizhu ensembles generally have 17 pipes but with only 13 or 14 sounding pipes. Its scale is mainly diatonic, for example the 17 pipe (4 silent) sheng used in Jiangnan sizhu is tuned:

With the development of guoyue music in mid-20th century China, the sheng underwent changes to increase its range and volume. The guoyue sheng had all its 17 pipes fitted with reeds, then the number of pipes increased to 21, and metal tubes were attached to the bamboo pipes to amplify its sound. The other change was the development of the keyed sheng.

Chromatic 24 and 26 pipe keyed sheng were common during the 1950s, but current models usually have 36 pipes. There are four main ranges of keyed sheng, forming a family of soprano, alto, tenor and bass. All are chromatic throughout their range, and tuned to the equal temperament scale.

Much larger types of keyed sheng include the da paisheng (lit. large row sheng); a large floor standing organ-like instrument with foot pedals, and the baosheng (lit. held sheng), which is played resting on the player’s lap or on a stand.