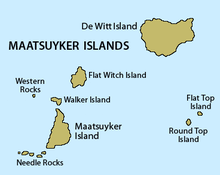 Map of the Maatsuyker Islands 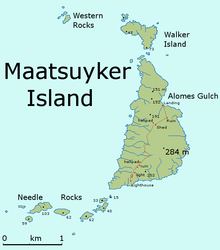 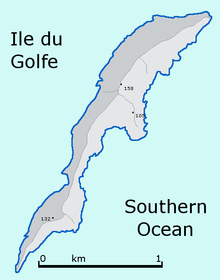 Outline of Ile du Golfe shaped like a dolphin

The Maatsuyker Islands Group is a group of islands and rocks located 5.5 kilometres off the south coast of Tasmania. Maatsuyker Island is the southernmost island of the group and of the Australian continental shelf. There are exposed rocks further south of Maatsuyker but they do not meet the definition of "islands". Macquarie Island, far to the south, is also Australian territory but it is an upthrust piece of ocean floor in the remote Southern Ocean and is in a geological sense completely separate from the continent.

The group is noted for its rich marine wildlife, predominantly wet and windy weather conditions, and Australia's most southerly lighthouse. The group is part of the Southwest National Park and thus also part of the Tasmanian Wilderness World Heritage Site.[1]

The group consists of at least six islands and two groups of rocks.[2] The main island after which the group is named, Maatsuyker Island, is approximately 2.6 kilometres long north/south at its longest on a bearing of 196°, by 1.2 kilometres wide east/west at its widest on a bearing of 105°. Needle Rocks (also known unofficially as The Needles)[3] lie just off the south west tip of Maatsuyker Island. Walker Island, Flat Witch Island and the Western Rocks lie just to the north. De Witt Island lies some 6.5 kilometres to the north-east, and the remaining two islands, Flat Top Island and Round Top Island, are some 7 kilometres to the east. Maatsuyker Island is near the south side of the group, and its distance from the Tasmanian mainland is around 10.4 kilometres.

Sources differ on whether nearby islands are part of the group. Parks and Wildlife Service,[2] includes only the base set above. Brothers[5] includes four extra in an extended group.

The islands are erosional remnants of the Tasmanian mainland, and are typically steep-sided and rocky.

White[6] and Brothers[5] refer to islands in addition to those in the group. These include Breaksea Islands, Eddystone, Kathleen Island, Mewstone, Pedra Branca, Shanks Islands and Trumpeter Islets. Several of these are quite distant from Maatsuyker Island.

Abel Tasman led the first known European expedition to reach Tasmania. His journal[7] records that he first sighted Tasmania on 24 November 1642. The translation of the journal entry for 1 December 1642, seven days later, refers to Wit's islands, Sueers islands, Maetsuickers islands (Maatsuyker Islands) and Boereels islands. The names of all of these islands and Tasmania itself under its then name of Van Diemens Land were all names of then members of the Council of India of Tasman's employer, the Dutch East India Company (see Tasman's 1642 orders in Appendix D of the journal). Antonio Van Diemen was the Governor-General and so got the name of the largest island. This journal entry for 1 December came only 7 days after the first sighting of Tasmania, so it is evident that the Maatsuyker Islands Group was named after Joan Maetsuicker (today's spelling would be Johan), who was also a councillor.

Other theories about the origin of the name have been offered that are more colourful but are fantastical conjectures of a much later period.

Given the evidence cited above and the demonstrated fact that Tasman named the other islands in the area after the Councillors, these three anecdotal explanations are - however charming - fantasies.

In 1891 a lighthouse was completed on Maatsuyker Island and until today it remains Australia's most southerly lighthouse. From the inauguration until the installation of the automated light, the lighthouse was manned by a small staff of lighthouse keepers, who constituted the total population of the island.

Weather conditions in the area can be extreme, with the Roaring Forties wind being a particular problem. The maximum wind gust ever recorded was 174 km/h.[9] Reportedly, the first keepers of the light took chickens with them to Maatsuyker but the fowls blew away into the ocean. Given the wind and lack of shelter, this is possible if they were left outside during storms. Vegetables get blown flat by the wind, but surprisingly, can be grown successfully,[10] even though the garden is on the west side of the island, facing into the prevailing winds.

Maatsuyker Island supports a surprising variety of flora and fauna, although the flora is limited in size by the windy conditions. The soil is reportedly extremely rich due to thousands of years of sea bird guano deposits,[10] and supports a variety of native and imported flora. As a testament to fertility, potatoes sown by former lighthouse keepers now grow wild.

Seals are common and include both New Zealand and Australian Fur Seals.[11]

The Maatsuyker group is well known for its abundant bird life. Sea birds present include the critically endangered Northern Soft-plumaged Petrel (Pterodroma mollis deceptornis).[12] The first record of Soft-plumaged Petrels breeding in Australia is from Maatsuyker.[13] The group has been identified by BirdLife International as an Important Bird Area (IBA) because it supports over 1% of the world populations of Short-tailed Shearwaters (about 1.5 million pairs), Fairy Prions and Black-faced Cormorants, as well as thousands of pairs of Little Penguins and Common Diving-Petrels. [14]