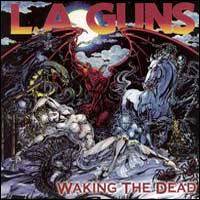 "Waking The Dead" is both the last album to feature guitarist and the first to feature bassist Adam Hamilton.

The album features "OK, Let's Roll" - dedicated to and the brave tragic souls who rushed the cockpit of Flight 93 during the events of .

Though slated to be included, the Japanese edition was never officially released, leaving "Call of the Wild" unavailable.