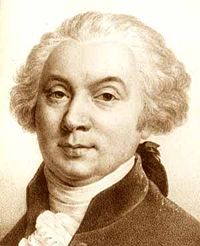 Jérôme Pétion de Villeneuve was the son of a procureur at Chartres. Though it is known that he was trained as a lawyer, very few specifics are known about Petion’s early life, as he was virtually unknown prior to the French Revolution.[1] He became an advocate in 1778, and at once began to try to make a name in literature. His first printed work was an essay, Sur les moyens de prévenir l'infanticide, which failed to gain the prize for which it was composed, but pleased Brissot so much that he printed it in vol. vii. of his Bibliothèque philosophique des législateurs.

Pétion's next works, Les Lois civiles, and Essais sur le mariage, in which he advocated the marriage of priests, confirmed his position as a bold reformer. He also attacked long-held Ancien Régime traditions such as primogeniture, accusing it of dividing the countryside into “proletarians and colossal properties.”[2] Later works penned by Pétion include his account of Haiti entitled "Reflexions sur la noir et denonciation d’un crime affreux commis a Saint-Domingue" (1790)[3] and "Avis aux francois" in which he chides France for its corruption.[4] 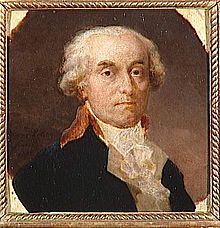 When the elections to the Estates-General took place in 1789 he was elected a deputy to the Tiers Etat for Chartres. Both in the assembly of the Tiers Etat and in the Constituent Assembly Pétion showed himself a radical leader. Although Petion was overshadowed in the Assembly by such orators as Mirabeau and Barnave, his close relationship with Girondin leader Brissot provided him with helpful advice on political conduct.[5] He supported Mirabeau on 23 June, attacked the queen on 5 October, and was elected president on 4 December 1790. On 15 June 1791 he was elected president of the criminal tribunal of Paris. On 21 June 1791 he was chosen one of three commissioners appointed to bring back the king from Varennes, and he has left a fatuous account of the journey. After the last meeting of the assembly on 30 September 1791 Robespierre and Pétion were made the popular heroes and were crowned by the populace with civic crowns.

By late 1791, administrative control of Paris was dominated by the Jacobins and mayor Jean-Sylvain Bailly had resigned due to constant political attacks from the left.[6] Pétion received a still further proof of the affection of the Parisians for himself on 16 November 1791, when he was elected second mayor of Paris in succession to Bailly. In his mayoralty he exhibited clearly his republican tendency and his hatred of the old monarchy, especially on 20 June 1792, when he allowed the mob to overrun the Tuileries and insult the royal family. For neglecting to protect the Tuileries he was suspended from his functions by the Directory of the Seine département, but the leaders of the Legislative Assembly felt that Pétion's cause was theirs, and rescinded the suspension on 13 July. On 3 August, at the head of the municipality of Paris, Pétion demanded the dethronement of the king.

Following news of the Duke of Brunswick’s Prussian army reaching the fortress of Verdun near Paris during the late summer of 1792, fear encouraged frenzied Parisian mobs to target prisoners, royalist sympathizers, and Catholic priests in a series of gratuitous acts of violence that would come to be known as the September Massacres.[7] With disagreements over such items as the necessity of the September Massacres, the Convention was a scene of large-scale political infighting between different factions.[8] The Girondin represented the moderate Right in the Convention while their more radical opponents, the Montagnards, represented the Left and were distinguished by their preference for occupying the higher rows of benches in the Convention.[9]

Pétion was elected to the Convention for Eure-et-Loir and became its first president. LP Manuel had the folly to propose that the president of the Assembly should have the same authority as the president of the United States; his proposition was at once rejected, but Pétion got the nickname of "Roi Pétion," which contributed to his fall. His jealousy of Robespierre allied him to the Girondin party, with which he voted for the king's death and for the appeal to the people. He participated to the Constitution Committee that drafted the Girondin constitutional project. He was elected in March 1793 to the first Committee of Public Safety; and he attacked Robespierre, who had accused him of having known and having kept secret Dumouriez's project of treason.

His popularity however had waned, and his name was among those of the twenty-two Girondin deputies proscribed on 2 June. Pétion was one of those who escaped to Caen and raised the standard of provincial insurrection against the Convention; and, when the Norman rising failed, he fled with Marguerite-Élie Guadet, François Nicolas Leonard Buzot, Charles Jean Marie Barbaroux, Jean-Baptiste de la Salle and Jean-Baptiste Louvet de Couvrai to the Gironde, where they were sheltered by a wigmaker of Saint Emilion. At last, a month before Robespierre's fall in June 1794, the escaped deputies felt themselves no longer safe, and deserted their asylum; Louvet found his way to Paris, Salle and Guadet to Bordeaux, where they were soon taken; Barbaroux was guillotined after a botched suicide attempt; and the bodies of Pétion and Buzot, who had killed themselves, were found in a field, half eaten by wolves.