Screen Gems
Not to be confused with EUE/Screen Gems.

Screen Gems is an American movie production company and subsidiary company of Sony Pictures Entertainment's Columbia TriStar Motion Picture Group that has served several different purposes for its parent companies over the decades since its incorporation.

For an entire decade, Charles Mintz distributed his Krazy Kat, Scrappy, and Color Rhapsody animated film shorts through Columbia Pictures. When Mintz became indebted to Columbia in 1939, he ended up selling his studio to them. Under new management, the studio assumed a new name, Screen Gems. The name was derived from an early Columbia Pictures slogan, "Gems of the Screen", itself a takeoff on the song "Columbia, the Gem of the Ocean". Jimmy Bronis, Mintz's production manager became the studio head, but was shortly replaced by Mintz's brother-in-law, George Winkler. After this, Columbia decided to "clean house" by ousting the bulk of the staff (including Winkler) and hiring creative cartoonist, Frank Tashlin. After Tashlin's short stay came Dave Fleischer, formerly of the Fleischer Studios, and after several of his successors came Ray Katz and Henry Binder from Warner Bros. Cartoons (previously Leon Schlesinger Productions). Animators, directors, and writers at the series included people such as Art Davis, Sid Marcus, Bob Wickersham, and, during its latter period, Bob Clampett.

Like most studios, the Screen Gems studio had several established characters on their roster. These included Flippity and Flop, Willoughby Wren, and Tito and His Burrito. However, the most successful characters the studio had were The Fox and the Crow, a comic duo of a refined Fox and a street-wise Crow.

Screen Gems is also notable for being, in an attempt to keep costs low, the last American animation studio to stop producing black and white cartoons. The final black-and-white Screen Gems shorts appeared in 1946, over three years after the second-longest holdouts (Famous Studios and Leon Schlesinger Productions). During that same year, the studio shut its doors for good, though their animation output continued to be distributed until 1949.

The Screen Gems cartoons were only moderately successful when compared to those of Disney, Warner Bros., and MGM. The studio's purpose was assumed by an outside producer, United Productions of America (UPA), whose cartoons, including Gerald McBoing Boing and the Mr. Magoo series, were major critical and commercial successes. 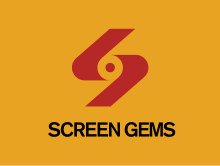 Older Screen Gems logo used in 1965, notably referred by its viewers as the "S from Hell", partially because of the electronic music composed by Eric Siday that accompanied its display.[1]

In 1948, Screen Gems was revived to serve as the television subsidiary of Columbia, producing and syndicating several popular shows (see below) and also syndicating Columbia Pictures' theatrical film library to television, including the wildly successful series of two-reel short subjects starring The Three Stooges in the late 1950s. Earlier in August 1957, they also acquired syndication rights to "Shock!", a package of Universal horror films (later reverted to MCA TV), which was enormously successful in reviving that genre.[2] The name "Screen Gems", at the time, was used to hide the fact that the film studio was entering television production and distribution. Many film studios saw television as a threat to their business, thus it was expected that they would shun the medium. However, Columbia was one of a few studios who branched out to television under a pseudonym to conceal the true ownership of the television arm. That is until 1955, when Columbia decided to use its Torch Lady logo under the Screen Gems banner.

In the late 1950s Screen Gems would also go into broadcasting. Stations that would be owned by Screen Gems over the years would include KCPX (Salt Lake City), WVUE (New Orleans), WAPA (San Juan), WNJU (Linden, NJ), and several radio stations as well, including 50,000-watt clear channel WWVA (Wheeling WV). As a result in funding its acquisitions, 18% of Screen Gems' was spun-off from Columbia and it became a publicly traded company in NYSE until 1969.

From 1964 to 1969, former child star Jackie Cooper was Vice President of Program Development. He was responsible for packaging series (such as Bewitched) and other projects and selling them to the networks.

In 1974, Screen Gems was renamed Columbia Pictures Television. The final notable production from this incarnation of Screen Gems before the name change was the 1974 mini-series QB VII. Columbia was the last major studio to enter television by name.

Changes in corporate ownership of Columbia came in 1982, when Coca-Cola bought the company, although continuing to trade under the CPT name. In the mid-1980s, Coca-Cola reorganized its television holdings to create Coca-Cola Television, merging CPT with the television unit of Embassy Communications as Columbia/Embassy Television, although both companies continued to use separate identities until February 8, 1988, when it and Tri-Star Television were reunited under the CPT name.

Television programs produced and/or syndicated by Screen Gems (most shows produced by Hanna-Barbera Productions are now owned and distributed by Warner Bros. Television, except for Jeannie and Partridge Family 2200 A.D. (see below):

On September 16, 2002, Columbia TriStar Television became Sony Pictures Television,[3] while three years earlier, in 1999, Screen Gems was resurrected as a fourth specialty film producing arm of Sony's Columbia TriStar Motion Picture Group, after Sony Pictures Classics, Triumph Films and Destination Films. Screen Gems produces and releases "films that fall between the wide-release movies traditionally developed and distributed by Columbia Pictures and those released by Sony Pictures Classics."[4] Many of its releases are of the horror, thriller, action, and comedy genres, making the unit similar to Dimension Films (part of The Weinstein Company), Hollywood Pictures (part of the Walt Disney Company), and Rogue Pictures (currently owned by Relativity Media, but distributed by former owners Universal Studios).

The most-successful Screen Gems film commercially as of November 2010 was Resident Evil: Afterlife, which grossed $296,221,566 in international box office receipts.