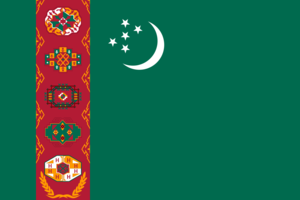 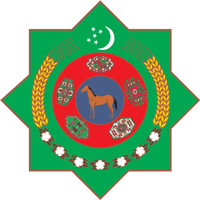 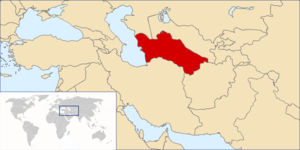 Turkmenistan ( _tk. Türkmenistan; also known as "Turkmenia") is a country in . The name Turkmenistan is derived from Persian, meaning "land of the Turkmen". The name of its capital, , is derived from Persian as well, loosely translating as "the city of loveliness". Until 1991, it was a constituent republic of the , the Turkmen Soviet Socialist Republic. It is bordered by to the southeast, to the southwest, to the northeast, to the northwest, and the to the west.

According to CIA World Factbook 2007 figures, Turkmenistan's GDP growth rate of 11.6% ranks 11th in the world. Although it is wealthy in natural resources in certain areas, most of the country is covered by the Karakum (Black Sands) Desert. It has a single-party system, and was ruled by until 21 December 2006, when he died. Presidential elections were held on 11 February 2007. was declared the winner with 89% of the vote. He was sworn in on 14 February 2007.

The territory of Turkmenistan has a long and checkered history, as armies from one empire after another decamped there on their way to more prosperous territories. The region's written history begins with its conquest by the of , as the region was divided between the satrapies of , , and .

conquered the territory in the fourth century on his way to , around the time that the was established as a major trading route between and the . One hundred and fifty years later, Persia's established its capital in Nisa, now in the suburbs of the capital, Ashgabat. In the seventh century CE, s conquered this region, bringing with them and incorporating the Turkmen into ern culture. The Turkmenistan region soon came to be known as the capital of , when the caliph moved his capital to .

In the middle of the eleventh century, the Turkoman-ruled Seljuk Empire concentrated its strength in the territory of modern Turkmenistan in an attempt to expand into Khorasan (modern Afghanistan). The empire broke down in the second half of the twelfth century, and the Turkmen lost their independence when took control of the eastern Caspian Sea region on his march west. For the next seven centuries, the Turkmen people lived under various empires and fought constant intertribal wars. Little is documented of Turkmen history prior to Russian engagement. However, from the thirteenth to the sixteenth centuries, Turkmen formed a distinct ethnolinguistic group. As the Turkmen migrated from the area around the in contemporary Kazakhstan toward the Iranian border region and the basin, tribal Turkmen society further developed cultural traditions that would become the foundation of Turkmen national consciousness.

Between the seventeenth and nineteenth centuries, control of Turkmenistan was fought over by Persian shahs, Khiva khans, the emirs of Bukhara and the rulers of Afghanistan. During this period, Turkmen spiritual leader reached prominence with his efforts to secure independence and autonomy for his people. At this time, the vast territory of Central Asia including the region of Turkmenistan was largely unmapped and virtually unknown to and the . Rivalry for control of the area between the and Tsarist Russia was characterised as . Throughout their conquest of Central Asia, the Russians were met with the stiffest resistance by the Turkmen. By 1894, however, Russia had gained control of Turkmenistan and incorporated it into its empire. The rivalry officially concluded with the . Slowly, Russian and European cultures were introduced to the area. This was evident in the architecture of the newly-formed city of , which became the capital. The of 1917 in Russia and subsequent political unrest led to the declaration of the area as the , one of the six republics of the in 1924, assuming the borders of modern Turkmenistan.

The new Turkmen SSR went through a process of further . The tribal Turkmen people were encouraged to become secular and adopt European-style clothing. The Turkmen alphabet was changed from the traditional Arabic script to Latin and finally to Cyrillic. However, bringing the Turkmens to abandon their previous nomadic ways in favor of was not fully embraced until as late as 1948. Nationalist organizations in the region also existed during the 1920s and the 1930s.

When the began to collapse, Turkmenistan and the rest of the n states heavily favored maintaining a reformed version of the state, mainly because they needed the economic power and common markets of the Soviet Union to prosper. Turkmenistan declared independence on 27 October 1991,

In 1991, Turkmenistan became a member of the , an international organization of former Soviet republics. However, Turkmenistan reduced its status in the organization to "associate member" in August 2005. The reason stated by the Turkmen president was the country's policy of permanent neutrality.

The former Soviet leader, , remained in power as Turkmenistan's leader after the . Under his post-Soviet rule, Russian-Turkmeni relations greatly suffered.Fact|date=February 2007 He styled himself as a promoter of al and Turkmen culture (calling himself "Turkmenbashi", or "leader of the Turkmen people"), but he became notorious in the West for his dictatorial rule and extravagant . The extent of his power greatly increased during the early 1990s, and in 1999 he became .

Niyazov died unexpectedly on 21 December 2006, leaving no heir apparent and an unclear line of succession. A former deputy prime minister rumored to be the illegitimate son of Niyazov, [cite web |url=http://news.bbc.co.uk/2/hi/asia-pacific/6346185.stm |title=Profile: Kurbanguly Berdymukhamedov |accessdate=2008-10-08 |work=news.bbc.co.uk |publisher= |date=2007-12-21 ] , became acting president, although under the constitution the Chairman of the People's Council, , should have succeeded to the post. However, Atayev was accused of crimes and removed from office.

The politics of Turkmenistan take place in the framework of a presidential , with the President both and . Turkmenistan has a single-party system. However in September 2008, the People's Council unanimously passed a resolution adopting a new Constitution. The latter will result in the abolition of the Council and a significant increase in the size of Parliament in December 2008. The new Constitution also enables the formation of multiple political parties.

After 69 years as part of the (including 67 years as a union republic), Turkmenistan declared its independence on 27 October 1991.

, a former bureaucrat of the , ruled Turkmenistan from 1985, when he became head of the , until his death in 2006. He retained absolute control over the country after the . On 28 December 1999, Niyazov was declared of Turkmenistan by the Mejlis (parliament), which itself had taken office a week earlier in elections that included only candidates hand-picked by President Niyazov. No opposition candidates were allowed.

The current President of Turkmenistan is , who took control following Niyazov's 2006 death.

The former Communist Party, now known as the , has been the only one legally permitted to operate. Political gatherings are illegal unless government sanctioned.

Human rights are generally not respected by many authorities in Turkmenistan, although some are guaranteed in the , such as , , freedom from , and . Other social and economic rights include the , the , and the .

However, there are and freedom of sexuality issues. Any act of homosexuality in Turkmenistan is punishable by up to five years in prison. According to , despite international pressure, the authorities keep a close watch on all religious groups. The legal framework is so constrictive that many prefer to exist underground rather than pass through the official processes, which act as barriers.Fact|date=February 2007 adherents are affected,Fact|date=February 2007 in addition to groups such as , Bahá'ís, and the followers of the movement. Hare Krishna followers are not allowed to seek donations at the country's main airport, Ashgabat.Fact|date=August 2008

According to the 2007 World Press Freedom Index, Turkmenistan had the third-worst restrictions on the in the world.

In addition, according to the , the new president enforced a ban on satellite dishes,Fact|date=August 2008 a measure often threatened under Niyazov, but never acted upon.

Turkmenistan is divided into five provinces or "welayatlar" (singular - "") and one independent city:

Over 80% of the country is covered by the . The center of the country is dominated by the and the Karakum Desert. The Range, along the southwestern border, reaches 2,912 meters (9,553 ft). The Turkmen Balkan Mountains in the far west and the Kugitang Range in the far east are the only other significant elevations. Rivers include the , the Murghab, and the Tejen.

The climate mostly consists of an arid subtropical desert, with little rainfall. Winters are mild and dry, with most precipitation falling between January and May. The area of the country with the heaviest precipitation is the range.

The Turkmen shore along the is 1768 km long. The is entirely landlocked, with no access to the ocean.

The major cities include , Türkmenbaşy (formerly Krasnovodsk) and .

Half of the country's irrigated land is planted with , making the country the world's tenth-largest producer of it. It possesses the world's fifth-largest reserves of and substantial oil resources. In 1994, the Russian government's refusal to export Turkmen gas to markets and mounting debts of its major customers in the former Soviet Union for gas deliveries contributed to a sharp fall in industrial production and caused the budget to shift from a surplus to a slight deficit.

Turkmenistan has taken a cautious approach to economic reform, hoping to use gas and cotton sales to sustain its economy. In 2004, the unemployment rate was estimated to be 60%; the percentage of the population living below the poverty line was thought to be 58% a year earlier. [cite web|title=|work=U.S. government publication|publisher=|date=19 December 2006|url=https://www.cia.gov/library/publications/the-world-factbook/geos/tx.html| accessmonthday = 21 December | accessyear=2006] goals remain limited. Between 1998 and 2002, Turkmenistan suffered from the continued lack of adequate routes for natural gas and from obligations on extensive short-term external . At the same time, however, the value of total exports has risen sharply because of increases in international oil and gas prices. Economic prospects in the near future are discouraging because of widespread internal and the burden of foreign debt.

President Niyazov spent much of the country's revenue on extensively renovating cities, Ashgabat in particular. Corruption watchdogs voiced particular concern over the management of Turkmenistan's currency reserves, most of which are held in off-budget funds such as the Foreign Exchange Reserve Fund in the Deutsche Bank in Frankfurt, according to a report released in April 2006 by London-based non-governmental organization . According to the decree of the Peoples' Council of 14 August 2003, [Resolution of Khalk Maslahati (Peoples' Council of Turkmenistan) N 35 ()] , , and will be subsidized for citizens up to 2030; however, shortages are frequent. On 5 September 2006, after Turkmenistan threatened to cut off supplies, Russia agreed to raise the price it pays for Turkmen natural gas from $65 to $100 per 1,000 cubic meters. Two-thirds of Turkmen gas goes through the Russian state-owned . [ [http://news.bbc.co.uk/2/hi/business/5314940.stm BBC NEWS | Business | Russia reaches Turkmen gas deal ] ]

The majority of Turkmenistan's citizens are ethnic Turkmens who predominately adhere to with sizeable minorities of , and . Smaller minorities include , Azeris, , , Koreans, and . A small number of used to live in Turkmenistan but almost none are left now. Turkmen is the of Turkmenistan, though Russian still is widely spoken in cities as a "language of inter-ethnic communication" (per the 1992 Constitution). There is also a small but distinct minority of .

Education is universal and mandatory through the secondary level, the total duration of which was earlier reduced from 10 to 9 years, with the new President it has been decreed that the 2007 - 2008 school year will be of 10 years as will all subsequent years.Fact|date=November 2007