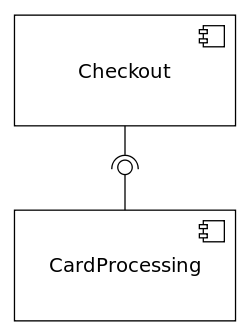 A simple example of two components expressed in UML 2.0. The checkout component, responsible for facilitating the customer's order, requires the card processing component to charge the customer's credit/debit card (functionality that the latter provides).

Component-based software engineering (CBSE) (also known as component-based development (CBD)) is a branch of software engineering that emphasizes the separation of concerns in respect of the wide-ranging functionality available throughout a given software system. This practice aims to bring about an equally wide-ranging degree of benefits in both the short-term and the long-term for the software itself and for organizations that sponsor such software.

Software engineers regard components as part of the starting platform for service-orientation. Components play this role, for example, in Web services, and more recently, in service-oriented architectures (SOA), whereby a component is converted by the Web service into a service and subsequently inherits further characteristics beyond that of an ordinary component.

Components can produce or consume events and can be used for event driven architectures (EDA).

Definition and characteristics of components

An individual software component is a software package, a Web service, or a module that encapsulates a set of related functions (or data).

All system processes are placed into separate components so that all of the data and functions inside each component are semantically related (just as with the contents of classes). Because of this principle, it is often said that components are modular and cohesive.

With regard to system-wide co-ordination, components communicate with each other via interfaces. When a component offers services to the rest of the system, it adopts a provided interface that specifies the services that other components can utilize, and how they can do so. This interface can be seen as a signature of the component - the client does not need to know about the inner workings of the component (implementation) in order to make use of it. This principle results in components referred to as encapsulated. The UML illustrations within this article represent provided interfaces by a lollipop-symbol attached to the outer edge of the component.

However, when a component needs to use another component in order to function, it adopts a used interface that specifies the services that it needs. In the UML illustrations in this article, used interfaces are represented by an open socket symbol attached to the outer edge of the component.

A simple example of several software components - pictured within a hypothetical holiday-reservation system represented in UML 2.0.

Another important attribute of components is that they are substitutable, so that a component can replace another (at design time or run-time), if the successor component meets the requirements of the initial component (expressed via the interfaces). Consequently, components can be replaced with either an updated version or an alternative without breaking the system in which the component operates.

Software components often take the form of objects (not classes) or collections of objects (from object-oriented programming), in some binary or textual form, adhering to some interface description language (IDL) so that the component may exist autonomously from other components in a computer.

When a component is to be accessed or shared across execution contexts or network links, techniques such as serialization or marshalling are often employed to deliver the component to its destination.

It takes significant effort and awareness to write a software component that is effectively reusable. The component needs to be:

As of 2010[update], modern reusable components encapsulate both data structures and the algorithms that are applied to the data structures. It[clarification needed] builds on prior theories of software objects, software architectures, software frameworks and software design patterns, and the extensive theory of object-oriented programming and the object oriented design of all these. It claims that software components, like the idea of hardware components, used for example in telecommunications, can ultimately be made interchangeable and reliable. On the other hand, it is argued that it is a mistake to focus on independent components rather than the framework (without which they would not exist).[1]

The idea that software should be componentized - built from prefabricated components - first became prominent with Douglas McIlroy's address at the NATO conference on software engineering in Garmisch, Germany, 1968, titled Mass Produced Software Components.[2] The conference set out to counter the so-called software crisis. McIlroy's subsequent inclusion of pipes and filters into the Unix operating system was the first implementation of an infrastructure for this idea.

Brad Cox of Stepstone largely defined the modern concept of a software component.[3] He called them Software ICs and set out to create an infrastructure and market for these components by inventing the Objective-C programming language. (He summarizes this view in his book Object-Oriented Programming - An Evolutionary Approach 1986.)

IBM led the path with their System Object Model (SOM) in the early 1990s. As a reaction, Microsoft paved the way for actual deployment of component software with OLE and COM.[4] As of 2010[update] many successful software component models exist.

Proponents of object-oriented programming (OOP) maintain that software should be written according to a mental model of the actual or imagined objects it represents. OOP and the related disciplines of object-oriented analysis and object-oriented design focus on modeling real-world[citation needed] interactions and attempting to create "nouns" and "verbs" that can be used in more human-readable ways, ideally by end users as well as by programmers coding for those end users.

Component-based software engineering, by contrast, makes no such assumptions, and instead states that developers should construct software by gluing together prefabricated components - much like in the fields of electronics or mechanics. Some peers[who?] will even talk of modularizing systems as software components as a new programming paradigm.

Some[who?] argue that earlier computer scientists made this distinction, with Donald Knuth's theory of "literate programming" optimistically assuming there was convergence between intuitive and formal models, and Edsger Dijkstra's theory in the article The Cruelty of Really Teaching Computer Science, which stated that programming was simply, and only, a branch of mathematics.[5][6]

In both forms, this notion has led to many academic debates[weasel words] about the pros and cons of the two approaches and possible strategies for uniting the two. Some[who?] consider the different strategies not as competitors, but as descriptions of the same problem from different points of view.[citation needed]