Friendly fire is inadvertent firing towards one's own or otherwise friendly forces while attempting to engage enemy forces, particularly where this results in injury or death. A death resulting from a negligent discharge is not considered friendly fire. Neither is murder, whether premeditated or in the heat of the moment, nor is deliberate firing on one's own troops for disciplinary reasons, as in these cases there is no intent to harm the enemy.[1] Similarly, inadvertent harm to non-combatants or structures, usually referred to as "collateral damage", is also not considered to be friendly fire.[2]

The term friendly fire was originally adopted by the United States military. Many North Atlantic Treaty Organization (NATO) militaries refer to these incidents as blue on blue, which derives from military exercises where NATO forces were identified by blue pennants, hence "blue", and Warsaw Pact forces were identified by orange pennants. Another term for such incidents is fratricide, a word that originally refers to the act of a person killing their brother.

Friendly fire is often seen as an inescapable result of combat, and because it only accounts for a small percentage of casualties, can often be dismissed as irrelevant to the outcome of a battle. The effects of friendly fire, however, are not just material. Troops expect to be targeted by the enemy, but being hit by their own forces has a huge negative impact on morale. Forces doubt the competence of their command, and its prevalence makes commanders more cautious in the field.[3]

Attempts to reduce this effect by military leaders generally come down to identifying the causes of friendly fire and overcoming repetition of the incident through training, tactics and technology.

The primary cause of friendly fire is commonly known as the "fog of war" which attributes friendly fire incidents to the confusion inherent in warfare. Friendly fire that is the result of apparent recklessness or incompetence may fall into this category. The concept of a fog of war has come under considerable criticism, as it can be used as an excuse for poor planning, weak or compromised intelligence and incompetent command.

Where fire aimed at enemy forces accidentally ends up hitting one's own. Such incidents are exacerbated by close proximity of combatants and were relatively common during the First and Second World Wars, where troops fought in close combat and targeting was relatively inaccurate. As the accuracy of weapons improved, this class of incident has become less common but still occurs.

Where friendly troops are mistakenly attacked in the belief that they are the enemy. Highly mobile battles, and battles involving troops from many nations are more likely to cause this kind of incident as evidenced by incidents in the first Gulf War, or the shooting down of a British aircraft by a U.S. Patriot battery during the Invasion of Iraq.[4] According to CNN, the best-known case of such an accident was the death of Pat Tillman in Afghanistan, although the exact circumstances of that incident are yet to be definitively determined.[5]

In preparation for the invasion of Normandy "invasion stripes" were painted on Allied aircraft to assist identification. Similar markings had been used when the Hawker Typhoon was first introduced into use as it was otherwise very similar in profile to a German aircraft. Late in the war the "protection squadron" that covered the elite German jet fighter squadron as it landed or took-off were brightly painted to distinguish them from raiding Allied fighters.

A number of situations can lead to or exacerbate the risk of friendly fire.

Poor terrain and visibility are major factors. Soldiers fighting on unfamiliar ground can become disoriented more easily than on familiar terrain. The direction from which enemy fire comes may not be easy to identify, and poor weather conditions and combat stress may add to the confusion, especially if fire is exchanged. Accurate navigation and 'fire discipline' is vital.

In high-risk situations, leaders need to ensure units are properly informed of the location of friendly units and to issue clear, unambiguous orders, but they must also react correctly to responses from soldiers who are capable of using their own judgement. Miscommunication can be deadly. Radios, field telephones, and signalling systems can be used to address the problem, but when these systems are used to co-ordinate multiple forces such as ground troops and aircraft, their breakdown can dramatically increase the risk of friendly fire. When allied troops are operating the situation is even more complex, especially with language barriers to overcome.

Most militaries use extensive training to ensure troop safety as part of normal co-ordination and planning, but are not always exposed to possible friendly-fire situations to ensure they are aware of situations where the risk is high. Difficult terrain and bad weather cannot be controlled, but soldiers must be trained to operate effectively in these conditions, as well as trained to fight at night. Such simulated training is now commonplace for soldiers worldwide. Avoiding friendly fire can be as straightforward as ensuring 'fire discipline' is instilled in troops, so that they fire and cease firing when they are told to. Firing ranges now also include 'Don't Fire' targets.[3]

The increasing sophistication of weaponry, and the tactics employed against American forces to deliberately confuse them has meant that while overall casualties have fallen for American soldiers in the late 20th and 21st centuries, the overall percentage deaths due to friendly fire in American actions have risen dramatically. In the 1991 Gulf War, most of the Americans killed by their own forces were crew members of armored vehicles hit by anti-tank rounds. The response in training includes recognition training for Apache helicopter crews to help them distinguish American tanks and armored vehicles at night and in bad weather from those of the enemy. In addition, tank gunners must watch under fire in drills for "friendly" robotic tanks that pop out on training courses in California's Mojave Desert. They also study video footage to help them recognize American forces in battle more quickly.[6]

Improved technology to assist in identifying friendly forces is also an ongoing response to friendly fire problems. From the earliest days of warfare, identification systems were visual and developed into extremely elaborate suits of armour with distinctive heraldic patterns. When radar was developed during World War II, IFF systems to identify aircraft developed into a multitude of radio beacons.

Correct navigation is vital to ensuring units know where they are in relation to their own force and the enemy. Efforts to provide accurate compasses inside metal boxes in tanks and trucks has proven difficult, with GPS a major breakthrough. Government contractors are rushing to perfect infra-red and carbon dioxide laser beacons that can be mounted on armored vehicles and that will identify themselves to their own forces.[6]

Other technological changes include hand-held navigational devices that use satellite signals, giving ground forces the exact location of enemy forces as well as their own. The use of infra-red lights and thermal tape that are invisible to observers without night-goggles, or fibres and dyes that reflect only specific wavelengths are still in their infancy, but may prove to be key identifiers for friendly infantry units at night.

There is also some development of remote sensors to detect enemy vehicles — the Remotely Monitored Battlefield Sensor System (REMBASS) uses a combination of acoustic, seismic vibration, and infrared to not just detect, but identify vehicles. [3]

Some tactics make friendly fire virtually inevitable, such as the practice of dropping barrages of mortars on enemy machine gun posts in the final moments before capture. This practice continued throughout the 20th century since machine guns were first used in World War I, and the high friendly fire risk has generally been accepted by troops since machine gun emplacements are tactically so valuable, and at the same time so dangerous that the attackers wanted them to be shelled, considering the shells far less deadly than the machine guns.[3] Tactical adjustments include the use of "kill boxes", or zones that are placed off-limits to ground forces while allied aircraft attack targets, which goes back to the beginning of military aircraft in World War I.[6]

The shock and awe battle tactics adopted by the American military — overwhelming power, battlefield awareness, dominant maneuvers, and spectacular displays of force — are employed because they are believed to be the best way to win a war quickly and decisively, reducing casualties on both sides. However, if the only people doing the shooting are American, then a high percentage of total casualties are bound to be the result of friendly fire, blunting the effectiveness of the shock and awe tactic. It is probably the fact that friendly fire has proven to be the only fundamental weakness of the tactics that has caused the American military to take significant steps to overturn a blasé attitude to friendly fire and assess ways to eliminate it.[3]

Wars of the Roses 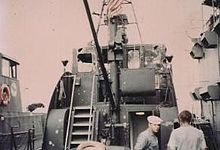 Aft view of the bridge of the USCGC Point Welcome after the friendly fire incident of 11 August 1966.[54]

8,000 such incidents have been estimated for the Vietnam War;[55][56][57] one was the inspiration for the book and film Friendly Fire.

Video of a friendly fire incident, showing errors of identification