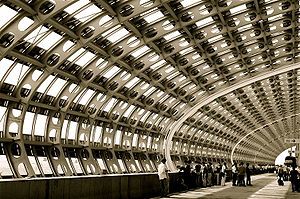 Detail of the structure of one of the exhibition halls in Pazhou.

The Canton Fair (Chinese: 广交会) is a trade fair held in the spring and autumn seasons each year since the spring of 1957 in Canton (Guangzhou), China.

The Fair is co-hosted by the Ministry of Commerce of China and People's Government of Guangdong Province, and organized by China Foreign Trade Centre.

Its full name since 2007 has been China Import and Export Fair (中国进出口商品交易会), renamed from Chinese Export Commodities Fair (中国出口商品交易会) [1][2], also known as Canton Fair (广州交易会), which abbreviation is 广交会. 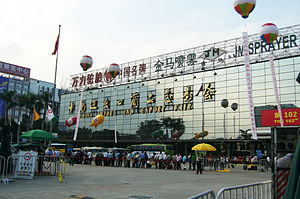 The fair leans to export trade, though import business is also done here. Apart from the above-mentioned, various types of business activities such as economic and technical cooperations and exchanges, commodity inspection, insurance, transportation, advertising, consultation, etc. are also carried out in flexible ways.

China Import and Export Fair (Pazhou) Complex, 380 Yuejiangzhong Road, Haizhu District, Guangzhou 510335
Liuhua Complex: The Complex was first put into use in 1974. It was discontinued as a venue for the Canton Fair, starting from the 104th Session (Autumn 2008).[3]