Adobe Acrobat is a family of application software developed by Adobe Systems to view, create, manipulate, print and manage files in Portable Document Format (PDF).[3] All members of the family, except Adobe Reader (formerly Acrobat Reader), are commercial software, while the latter is available as freeware and can be downloaded from Adobe's web site. Adobe Reader enables users to view and print PDF files but has negligible PDF creation capabilities.[4] Acrobat and Reader are widely used as a way to present information with a fixed layout similar to a paper publication.

Since the early 1990s, the Acrobat product has had several competitors, some of which used their own document formats, such as:

By the late 1990s PDF had become the de facto standard, and the others had become largely historical footnotes. This in turn has led to many more competitors for Adobe Acrobat, providing both free and commercial programs that create or manipulate PDF, such as Ghostscript, Foxit, Nitro PDF and Nuance Communications. Adobe also allows Acrobat plug-ins to be developed by third parties, which can add extra functions within the Acrobat program.

Adobe has changed the names of the products in the Acrobat family regularly, also splitting-up, joining, or discontinuing products. Initially, the name "Acrobat" was used as the parent name to a suite of products which included Acrobat Reader, Acrobat Exchange and Acrobat Distiller. Over time Acrobat Reader became Adobe Reader; and, Acrobat Exchange was simplified to Acrobat. Between version 3 and 5, Standard and Professional versions were one product simply called Adobe Acrobat.

As of December 2010[update], the current main members of the Adobe Acrobat family are:[5]

Acrobat 1.0 was originally released on 15 June 1993 for Macintosh. It was later for DOS and Windows 3.1. This was not available in single copies and was not initially free, with Acrobat Reader originally priced at $50 per user.[6] After a while, the IRS purchased a right to distribute Reader 1.0, effectively making it seem free to those who obtained it that way.

Acrobat 2.0 was first released in September 1994 for Windows and Macintosh. It included:

Adobe also released Distiller Server 4.0, a version of Distiller for Windows, Linux and Solaris that is licensed to multiple users, as well as Acrobat Business Tools 4.0, a limited version of Acrobat.

This version did not include PDFWriter in Macintosh release.[7]

Acrobat 6.0 was released in July 2003. This version introduced significant changes to the family of Adobe Acrobat:

Adobe Acrobat 7.0 was released in January 2005:[9] It was the first version to include a mandatory product activation. It included:

Adobe Acrobat 3D included all of the functionality of Acrobat Professional 7.0 as well as updated support for embedded 3D computer graphics, tools for capturing 3D content from OpenGL applications, and the Adobe Acrobat 3D Toolkit for converting CAD documents to PDF objects. Also included is a version of the capture tool for installation on Unix. 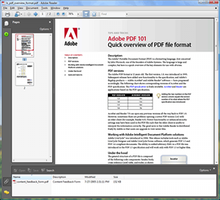 Acrobat Connect Professional (formerly Macromedia Breeze) was also added to the family. It allowed scalable interactive web conferencing and multiple personal meeting rooms for everyone across an enterprise.

The Mac OS X version of Adobe Acrobat Pro saw a significant favor: Adobe Acrobat for Macintosh was in Universal binary and ran on both PPC and Intel.

The Arabic and Hebrew versions are specifically developed for these specific languages, which are normally written right-to-left. These versions come with special TouchUp properties to handle digits, ligatures option and paragraph direction in right-to-left Middle Eastern scripts such as Arabic, Hebrew, and Persian, as well as standard left-to-right Indian scripts such as Devanagari and Gujarati. The Web Capture feature can convert single web pages or entire web sites into PDF files, while preserving the content's original text encoding. Acrobat can also copy Arabic and Hebrew text to the system clipboard in its original encoding; if the target application also supports the text encoding, then the text will appear in the correct script.

From Version 3.02 onwards, Acrobat Reader (now Adobe Reader) has included support for JavaScript. This functionality allows the document creator to include code which executes when the document is read. While JavaScript is designed without direct access to the file system to make it "safe", vulnerabilities have been reported for abuses such as distributing malicious code through Acrobat.[27] McAfee predicts that Adobe software, especially Reader and Flash, will be the primary target for attacks in 2010.[28] Adobe applications had already become the most popular client-software targets for attackers during the last quarter of 2009.[29]

On September 13, 2006, David Kierznowski provided sample PDF files illustrating these vulnerabilities. Since at least version 6, JavaScript can be disabled using the preferences menu and embedded URLs that are launched are intercepted by a security warning dialog box to either allow or block the website from launching.[30]

It was reported [32] on January 14, 2010 that an analyst identified a vulnerability in Internet Explorer as a tool used to spy on companies and individuals.

"...independent research conducted by security firm McAfee, which has found evidence that a vulnerability in Internet Explorer—but not Acrobat Reader—was exploited in the attack. iDefense later retracted its claim about PDFs, but stands behind the rest of its report."