National Institute of Standards and Technology

The National Institute of Standards and Technology (NIST), known between 1901 and 1988 as the National Bureau of Standards (NBS), is a measurement standards laboratory, otherwise known as a National Metrological Institute (NMI), which is a non-regulatory agency of the United States Department of Commerce. The institute's official mission is to:[1]

Promote U.S. innovation and industrial competitiveness by advancing measurement science, standards, and technology in ways that enhance economic security and improve our quality of life.

NIST had an operating budget for fiscal year 2007 (October 1, 2006-September 30, 2007) of about $843.3 million. NIST's 2009 budget was $992 million, but it also received $610 million as part of the American Recovery and Reinvestment Act.[2] NIST employs about 2,900 scientists, engineers, technicians, and support and administrative personnel. About 1,800 NIST associates (guest researchers and engineers from American companies and foreign nations) complement the staff. In addition, NIST partners with 1,400 manufacturing specialists and staff at nearly 350 affiliated centers around the country. NIST publishes the Handbook 44 that provides the "Specifications, tolerances, and other technical requirements for weighing and measuring devices".

In 1821 John Quincy Adams stated, "Weights and measures may be ranked among the necessities of life to every individual of human society.",[3] but this had long been understood. The Articles of Confederation, ratified by the colonies in 1781, contained the clause, "The United States in Congress assembled shall also have the sole and exclusive right and power of regulating the alloy and value of coin struck by their own authority, or by that of the respective states—fixing the standards of weights and measures throughout the United States— ....". Article 1, section 8, of the Constitution of the United States (1789), transferred this power to Congress; "The Congress shall have power ... To coin money, regulate the value thereof, and of foreign coin, and fix the standard of weights and measures". In January 1790 President Washington, in his first annual message to Congress stated that, "Uniformity in the currency, weights, and measures of the United States is an object of great importance, and will, I am persuaded, be duly attended to", and ordered Secretary of State Thomas Jefferson to prepare a plan for Establishing Uniformity in the Coinage, Weights, and Measures of the United States, afterwards referred to as the Jefferson report. On October 25,1791 Washington appealed a third time to Congress, "A uniformity of the weights and measures of the country is among the important objects submitted to you by the Constitution and if it can be derived from a standard at once invariable and universal, must be no less honorable to the public council than conducive to the public convenience." , but it was not until 1838 that a uniform set of standards was worked out.

The Congress of 1866 legalized the use of the metric system through the passage of US code 1952 Ed., Title 15, Ch 6, section 204 and 205[4]. On May 20, 1875, 17 of 20 countries signed a document known as the Metric Convention or the Treaty of the Meter which established the International Bureau of Weights and Measures under the control of an international committee elected by the General Conference on Weights and Measures.[5]

NIST is headquartered in Gaithersburg, Maryland, and operates a facility in Boulder, Colorado. NIST's activities are organized into laboratory programs, and extramural programs. Effective October 1, 2010, NIST was realigned by reducing the number of NIST laboratory units from ten to six.[6] NIST Laboratories include:[7]

NIST's Boulder laboratories are best known for NIST-F1, housing an atomic clock. NIST-F1 serves as the source of the nation's official time. From its measurement of the natural resonance frequency of caesium—which is used to define the second—NIST broadcasts time signals via longwave radio station WWVB at Fort Collins, Colorado, and shortwave radio stations WWV and WWVH, located at Fort Collins, Colorado and Kekaha, Hawaii, respectively.

The SURF III Synchrotron Ultraviolet Radiation Facility is a source of synchrotron radiation, in continuous operation since 1961. SURF III now serves as the US national standard for source-based radiometry throughout the generalized optical spectrum. All NASA-borne extreme-ultraviolet observation instruments have been calibrated at SURF since the 1970s, and SURF is used for measurement and characterization of systems for extreme ultraviolet lithography.

The Center for Nanoscale Science and Technology (CNST) performs research in nanotechnology, both through internal research efforts and by running a user-accessible cleanroom nanomanufacturing facility. This 'NanoFab' is equipped with tools for lithographic patterning and imaging (e.g. electron microscopes and atomic force microscopes). 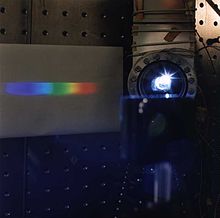 As part of its mission, NIST supplies industry, academia, government, and other users with over 1,300 Standard Reference Materials (SRMs). These artifacts are certified as having specific characteristics or component content, used as calibration standards for measuring equipment and procedures, quality control benchmarks for industrial processes, and experimental control samples.

NIST publishes the "Handbook 44" each year after the annual meeting of the National Conference on Weights and Measures (NCWM). Each edition is developed through cooperation of the Committee on Specifications and Tolerances of the NCWM and the Weights and Measures Division (WMD) of the NIST. The purpose of the book is a partial fulfillment of the statutory responsibility for "cooperation with the states in securing uniformity of weights and measures laws and methods of inspection."

NIST has been publishing various forms of what is now the "Handbook 44" since 1918 and began publication under the current name in 1949. The 2010 edition conforms to the concept of the primary use of the SI (metric) measurements recommended by the Omnibus Foreign Trade and Competitiveness Act (of 1988)[8][9]

In 2002 the National Construction Safety Team Act mandated NIST to conduct an investigation into the collapse of the World Trade Center buildings 1 and 2 and the 47-story 7 World Trade Center. The "World Trade Center Collapse Investigation"[citation needed], directed by lead investigator Shyam Sunder,[10] covered three aspects, including a technical building and fire safety investigation to study the factors contributing to the probable cause of the collapses of the WTC Towers (WTC 1 and 2) and WTC 7. NIST also established a research and development program to provide the technical basis for improved building and fire codes, standards, and practices, and a dissemination and technical assistance program to engage leaders of the construction and building community in implementing proposed changes to practices, standards, and codes. NIST also is providing practical guidance and tools to better prepare facility owners, contractors, architects, engineers, emergency responders, and regulatory authorities to respond to future disasters. The investigation portion of the response plan was completed with the release of the final report on 7 World Trade Center on November 20, 2008. The final report on the WTC Towers – including 30 recommendations for improving building and occupant safety – was released on October 26, 2005.[11]

NIST works in conjunction with the Technical Guidelines Development Committee of the Election Assistance Commission to develop the Voluntary Voting System Guidelines for voting machines and other election technology.

SAMATE (Software Assurance Metrics And Tool Evaluation) is a NIST project focused on improving software assurance by developing methods to enable software tool evaluations, measuring the effectiveness of tools and techniques, and identifying gaps in tools and methods.[12]

Three researchers at NIST have been awarded Nobel Prizes for their work in Physics: William D. Phillips in 1997, Eric A. Cornell in 2001, John L. Hall in 2005, which is the largest number for any US government laboratory. In 2011, Dan Shechtman was awarded the Nobel Prize in Chemistry for his work in the Metallurgy Division in 1982-1984 with John W. Cahn. Other notable people who have worked at NIST include:

Since 1989, the director of NIST has been a Schedule-C Presidential appointee and is confirmed by the United States Senate, and since that year the average tenure of NIST directors has fallen from 11 years to 2 years in duration. Fourteen persons have officially held the position (in addition to three acting directors who served temporarily). They are: