The province is located on the western end of the Khorat Plateau, separated from the Chao Phraya river valley by the Phetchabun and Dong Phaya Yen mountain ranges. Two national parks are in the province - the Khao Yai in the west and the Thab Lan in the south. Both parks are in the forested mountains of the Sankambeng Range, the southern prolongation of the Dong Phaya Yen mountains

Nakhon Ratchasima, or "Khorat," is a large province on the northeastern plateau and acts as a gateway to other provinces in the Northeast. It is 259 kilometres from Bangkok and has an area of around 20,494 square kilometres, making it the biggest province in Thailand. The province is rich in Khmer culture and has a long history.

The area around Korat was already an important center in the times of the Khmer empire in the 11th century, as can be seen by the temple ruins in the Phimai historical park. Still, Nakhon Ratchasima Province is one of the provinces where there is a sizable Northern Khmer population.[1]

A new walled-city with a surrounding moat, designated as Nakhon Ratchasima, was built in the seventeenth century by order of the King Narai, as the easternmost 'command post', guarding the Kingdom's border and supervising its Lao and Cambodian 'vassals'. It continued this duty during the Bangkok Period, although it was seized by deceit during Chao Anuwong of Vientiane's 1826 revolt against the King Rama III of Siam.

Nakhon Ratchasima has long been the most important political and economic center in the northeastern region. In the late nineteenth century, the railroad reached Korat became the junction of two main rail lines in the Northeastern, Isan, region.

In 1933 it was the stronghold of the royalist troops in the Boworadej Revolt, against the new ostensibly democratic government in Bangkok.

In the 1970s, the province was the site of United States military bases supporting the Vietnam War. 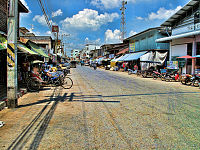 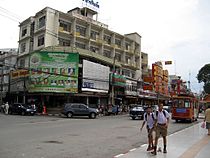 Roads Highway 2 (Mittraphap Road) is the main route that connects 9 districts in Nakhon Ratchasima including Muang district. This route also connects Nakhon Ratchasima to Saraburi and Khon Kaen provinces. As, Highway No. 24 links Si Khio district from the Highway 2 to Pak Thongcha, Chok Chai and Nong Bunnak districts and to Burirum province.

Taxi Taxis are plentiful, clean, safe, and inexpensive in Korat. They can be found at taxi stands in the city areas or hailed on the streets. There are also certain taxis that can be requested by phone, however, the fare is slightly higher than regular taxis. An increasing number of taxi drivers nowadays speak some English which may prove extremely useful for first-time visitors. The fare system is based on both distance and time. Fares begin at 30 Bath for the first 2 kilometers.

Motorbike-taxi The motorbike taxis are found mainly in the town areas and are used mainly for short distances.

Airport Nakhon Ratchasima has one airport but as of June 2007, it no longer services any flights. The nearest airport is in Buriram and has flights to and from Bangkok.

Nakhon Ratchasima or Khorat, is Thailand’s largest province and the ‘Gateway to Isaan’ (Gateway to the North-East). It also has beautiful National Parks, with many forests, mountains, waterfalls, and reservoirs. Furthermore, it is well known for a variety of quality handicrafts that visitors can choose from. Regarding tourism, locals Thais make up the majority. Most foreigners who visit the north-east view Khorat as just a stepping stone and pass right through without taking the opportunity to tour this province with its interesting and diverse history, architecture and natural beauty.

Spa service is available at some of the leading hotels.

Nakhon Ratchasima has a wide variety of local goods that tourists can buy from city markets or production centres. Famous handicrafts are Dan Kwian earthenware, silk and Mat Mi silk from Pak Thong Chai. Products of housewives can be bought from the Khorat Goods Centre near the provincial hall.

Food products include sausages, fermented sausages, Chinese sausages, minced pork that is found everywhere in the city and in Pak Chong, and Khorat noodles that are sold everywhere. The largest fruit market is Klang Dong Market before going up Khao Yai. This is where produce from Nakhon Ratchasima and nearby provinces is sold. The most famous fruit of Klang Dong is custard apple that is sold all year round.

Types of Nightlife in Khorat include:

Khorat is traditionally an agricultural province where most of the population works in farming such as: rice, sugar cane, tapioca, corn, jute, peanuts, sesame and fruits. In this day and age however, many of Khorat’s younger generation are moving to near-by Bangkok to work.

Since Khorat used to be a former US Airbase during the Vietnam War, there is quite a significant amount of war veteran retirees in Khorat. They simply never did go back ‘home’.

The people of Khorat are a mixed-breed. There are those of Khmer ancestry, Laotian ancestry and Chinese ancestry. In the town areas, most of the people speak standard Thai but in the more rural areas, they speak ‘Khorat’ which is a dialect half way between Thai and Isaan (Laotian).

Thao Suranari Memorial Fair (งานฉลองวันแห่งชัยชนะของท้าวสุรนารี) is an annual event of the province and is held during 23 March-3 April, the period Khunying Mo was victorious over her enemy. The fair features arts and culture, shops and exhibitions of public and private offices.

Phimai Boat Races (งานประเพณีแข่งเรือพิมาย) is held yearly by the people of Amphoe Phimai on the second weekend of November. Apart from the races of boats in Phimai and nearby districts, this interesting event has boat decorations for royal ceremonies and boat chants.

Pak Thong Chai on the other hand is famed for its high quality hand-woven traditional silk and it is the industry of one whole village there. Then there is Dan Kwian where pottery has been the local’s way of life for centuries.

In Dan Kwian however, the folk have traditionally been working in the field of pottery for centuries.

People can learn about how to make traditional pottery at Dan Kwiang and learn about making hand-woven silk at Pak Chong.

There are 4 universities in the area. 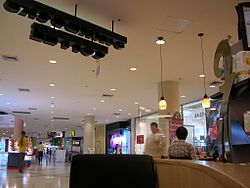