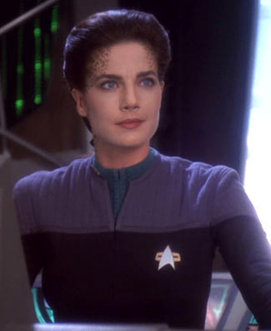 Jadzia Dax, played by Terry Farrell, was a main character during the first six seasons of the science fiction "". She is the station's chief science officer, and is close friends with commander and Bajoran first officer . Later in the series, she becomes involved with the character , and they marry during the sixth season of show. Her character is killed by Gul Dukat during the sixth season finale (due to Terry Farrell's desire to pursue a role on the upcoming TV Show "Becker" with ). The character of Dax re-emerges in the seventh season premiere in the form of .

Jadzia Dax is a joined Trill. Though she appears to be a young woman, Jadzia lives in with a wise and long-lived creature, known as a symbiont, named Dax. The two share a single, conscious mind, and her personality is a blending of the characteristics of both the host and the symbiont. As such, Dax has access to all the skills and memories of the symbiont's seven previous hosts.

At the beginning of the series, Jadzia has just recently been joined with the symbiont Dax after the natural death of the previous host, . Curzon had been a friend and mentor to station Commander , and Jadzia and Sisko continue this friendship despite the change in circumstances. Throughout the series, Sisko refers to Dax by the affectionate nickname "Old Man".

During the first few seasons, Dax is pursued romantically by Dr. . Dax consistently rebuffs him, though she later admits that she somewhat enjoyed the attention (cf. ""). After Jadzia's death, Dax's new host Ezri begins dating Bashir.

During the first season of the show, Dax is often portrayed as somewhat reserved and aloof. In the early second season episode "", she is ill-at-ease in the spider-filled caverns of a an moon, and is later disoriented by Kira's reckless piloting of a Bajoran starfighter. The writers' portrayal of the character begins to change in the second season, as they emphasize Dax's gusto for life and extensive knowledge of other cultures:
* The second-season episode "" begins with a scene in which Dax plays tongo with a group of . She seems surprisingly at home in this setting, calmly ignoring their sexist overtures and showing considerable skill at the game. Later in the episode, she remarks that the Ferengi are among the most interesting races she has encountered.
* Later that season, Dax joins a group of Klingons in a revenge quest (""). In this episode, it is revealed the Curzon Dax was a federation diplomat to the Klingon Empire, and swore a blood oath against "the Albino" with the Klingons Kang, , and Kor. Jadzia takes up the blood oath, and against Sisko's wishes she travels to the Albino's planet and participates in the revenge killing of the Albino and his minions.Jadzia's connection to the Klingon culture would become increasingly important as the series progressed, especially after the fourth-season arrival of . In the episode "", Dax joins Worf and Kor in the search for the titular Klingon artifact. In "", she supports Worf's attempt to kill his brother , and in "" she and Worf go on a tense mission aboard a Klingon ship. Dax would eventually marry Worf and join the Klingon House of .

Jadzia Dax is a joined Trill. "Jadzia" is the name of the young Trill woman, while "Dax" refers to a slug-like symbiont that resides in her abdomen. (Jadzia's actual family name was never revealed on the show. In the novels, her original name is said to be Jadzia Idaris.) While Jadzia is only twenty-eight years old at the beginning of the series, the creature Dax is hundreds of years old, having previously been hosted by seven previous Trill. As a result, Dax may be considered the oldest crewmate on Deep Space Nine.

Prior to Jadzia, the Dax symbiont had been hosted by Lela, Tobin, Emony, Audrid, Torias, Joran, and Curzon.

The burden of seven lifetimes' worth of memories is not always a positive one; several episodes of "Deep Space Nine" focus on Dax's struggle with her dual nature:
* In the first-season episode "", the previous host Curzon Dax is accused of murder. This leads to an hearing to determine whether Jadzia can be held responsible for crimes committed during another lifetime. The issue is resolved when evidence arises of Curzon's innocence.
* In the second-season episode "", an unjoined Trill named Verad attempts to steal the Dax symbiont. Verad is upset that his application for a joining has been rejected by the , and he plans to steal the Dax symbiont and escape into the . He manages to remove the Dax symbiont from Jadzia and partially join with it before his escape is thwarted.
* Later that season, Dax mentors a Trill initiate in the episode "". Dax is responsible for training the young Trill, and for evaluating his suitability for joining. During the episode, Jadzia and Sisko discuss her own training under Curzon Dax, as well as the role that joining plays in Trill society.
* In the third-season episode "", Dax begins to experience unsettling mental problems. She travels back to the Trill to discover the source of the problems. On her homeworld, she visits the "Caves of Mak'ala", a place on Trill where unjoined symbionts swim in pools carefully and lovingly tended by Trill Guardians. Eventually, she learns that Dax had previously been joined with an unsuitable host known as Joran, and that her memories of this trauma had been suppressed. Her mental problems subside after the other Trill help her to regain these memories.
* Later that season in the episode "", Jadzia encounters each of Dax's previous hosts in the Trill "rite of closure", including the insane Joran. This episode reveals much of the back story for the Dax character, and explores the relationship between Jadzia Dax, Curzon Dax, and Benjamin Sisko.
* In the fourth season episode "", Jadzia encounters Lenara Kahn, former wife of Torias Dax. Because Torias died suddenly, Dax's relationship with Lenara was never resolved, and the two struggle in the episode with their feelings towards one another. This is complicated by a taboo in Trill culture against romantic relationships with partners of previous hosts. This episode features one of the first televised kisses between two female characters.

Jadzia Dax was initially pursued by Dr. aboard the station. The Ferengi bar owner, Quark, also has a special affection for the Trill scientist, even after the Dax symbiont was transferred to Ezri. However, her most notable and serious suitors include
* Deral, played by , a prominent member of the recurring planet Meridian
* Dr. , played by , a Trill theoretical quantum physicist and the current host of Nilani Kahn, the widow of Torias Dax
* Lt. Commander Worf, a Klingon

In the fourth season, joins the cast of "Deep Space Nine" as the character . Perhaps because of her past interactions with Klingons, Dax is fairly flirtatious with Worf. Worf appears at first to be oblivious to this attention, and in the fifth-season episode "" he becomes enamored with a female Klingon named Grilka. This is resolved by the end of the episode, with Quark ironically winning the heart of Grilka, and Worf becoming romantically involved with Dax.

In the beginning, their relationship is very sexual, with the strong implication that their encounters are somewhat rough (the above episode ends with Worf and Dax visiting the infirmary with various bruises and other injuries). In the season 5 finale "", the station is overrun by Dominion forces, and Dax and Worf are assigned to different starships for the . Near the end of the episode, they agree to get married after the war is over. Worf and Dax's marriage is the centerpiece of season 6 episode "". During the episode, Dax must obtain permission from the lady Sirella to join the House of . At first Dax is loath to pay Sirella the required respect, and the lady is unwilling to accede to Dax's request. The situation is resolved by the conclusion, with Sirella admitting during the ceremony that nothing can stand between "the beating of two Klingon hearts".

Jadzia is killed in "", the finale of the sixth season. She and Worf had been trying to conceive, despite the doubts of Dr. Bashir that such a pregnancy was possible. After Major Kira tells Jadzia she has been praying for a conception, Jadzia receives encouraging test results from Julian, and goes to the station's temple to thank the Prophets. It now appears a pregnancy will be possible. The Cardassian Dukat arrives, possessed by a , with the intention of destroying the orb-like Bajoran artifacts known as the . Jadzia is no match for Dukat while he is infused with the Pah-wraith; he kills Jadzia and destroys the orbs. Upon her death in the infirmary, an agonized Worf screams out a Klingon wail of sorrow for his beloved or to let the Klingon after world know a warrior was on the way (Referenced from a episode. Her untimely death shakes the crew to its core: By the beginning of the season 7, Sisko has left the station in despair, and Worf has been risking his life on increasingly dangerous missions.

Though the host Jadzia is dead, the symbiont Dax survives and is implanted in a Trill named Ezri Tigan. The resulting joined Trill becomes a main character during the seventh and last season of the series. Several episodes focus on Ezri Dax resolving her relationship with Worf, and the subsequent development of a romantic relationship with Dr. .