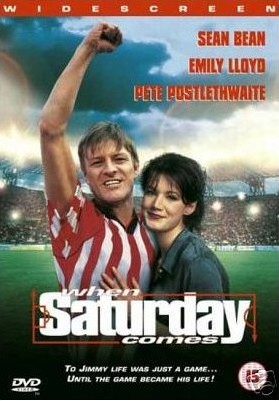 :"This article is about the film. For the football magazine of the same name see When Saturday Comes"When Saturday Comes" is a British from 1996 starring and , directed by . It is about a factory worker who gets scouted, firstly by the well-known non-league side and then later by Sheffield United Football Club. It was filmed at various locations around including , and .

The film is notable for its straying from football reality. When the film was made Sean Bean was himself 36, an age when most players are retiring, not starting. When Sheffield United reach the semi-final, the match is played at Bramall Lane when in reality the semi-final is played at a neutral venue.

The captain of the Sheffield United team, a player who hates Sean Bean's character, and the closest the film has to a villain, is played by . Sterland himself is a former Sheffield Wednesday player.

Most of the songs in this movie are original and produced by of . He produced more notably "Jimmy's Theme" and the title song.

* The 'street footballing kid' who appears in the film's opening scene doing kick ups in the street as a young version of lead character Jimmy Muir, is actually incorrectly credited on the film (and consequently on the ) as Daniel Oldham. The actor's name is actually Daniel Williamson (born ), who also happens to be the son of ex-Sheffield Wednesday footballer Charlie Williamson (who incidentally also appears in the film as a footballer who gets injured in the big game, giving the lead character the chance to come on as a substitute and become a hero).Fact|date=February 2007
* Charlie Williamson and his friend Mel Sterland, another ex-Sheffield Wednesday player who appears in the film (see above) both acted as Sheffield United players and therefore had to wear United kits for the match scenes, something which was a great strain for them given the two clubs' great rivalry. Mel also brought in a few of his new signings for Boston united to take part in the film, Boston United forward Tim Edge who played for the Manchester united side in the film, wore the famous number 7 shirt worn by Eric Cantona, just a day after the "kung fu" kick on a supporter in the crowd. Tim Edge who was a free scoring centre forward played for Boston United, Worksop Town, Matlock Town, and other semi-professional clubs.
* For a crucial goal in the semi-final, Mel Sterland appears to play a long ball which he then manages to receive (50 yards up the pitch) and lay off for Jimmy Muir to score.
*Sean Bean was married to his co-star Melanie Hill from 1990 to 1997.
* In 2006, when Manchester United played Sheffield United at Bramall lane in the Barclaycard Premiership, the announcer jokingly stated that "the last time this fixture was played, it was won with a penalty by Sean Bean."
*In a crucial scene when Mel Sterland was playing, the scene had to be re-taken many times as the fans made up of Sheffield United fans kept booing when they should have been cheering.