Marit Bjørgen (born March 21, 1980 in Trondheim) is a Norwegian cross country skier and triple olympic champion from Midtre Gauldal, Norway. Bjørgen is the most successful sprinter in Cross-Country World Cup history, with twenty-four victories. She is ranked first in the all-time Cross-Country World Cup rankings together with fellow Norwegian Bjørn Dæhlie, with forty-six individual victories. One of her most notable achievements was becoming the most successful athlete at the Vancouver 2010 Winter Olympics, by winning five medals, including three gold medals.

Bjørgen initially excelled at the sprint events, and seven victories in that event was enough to give her second place overall in the 2003/04 World Cup season. However in the 2004/05 season, Bjørgen became an accomplished distance skier.

On March 19, 2006 in Sapporo, Japan Bjørgen claimed her second FIS World Cup title. Bjørgen led the overall World Cup by 66 points, ahead of Canada's Beckie Scott going into the final race of the season, the 2 x 7.5 km double pursuit. Scott needed to win the race and for Bjørgen to finish no higher than eighth to claim the title. Scott did win the race but Bjørgen came fourth, winning the crystal globe with 1036 points to Scott's 1020. Bjørgen also won the sprint title for the season, 6 points ahead of Norway's Ella Gjømle, making the 2005/06 season the fourth season in a row that Bjørgen has won the sprint title. Bjørgen finished the distance standings in fourth place, 108 points behind Russia's Julija Tchepalova. 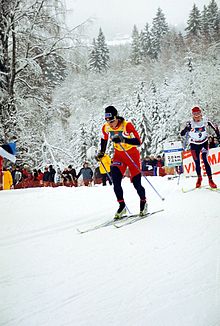 Marit Bjørgen in Otepää during the 2005–06 FIS Cross-Country World Cup.

Bjørgen made the podium eight times during the 2005/06 season, six of them in first place, one second and one third place. Bjørgen now has 70 podium finishes, 46 of them in first place, 13 in second and 11 in third. 22 of her victories have been in the sprint, which is by far her most successful event. Seven of these victories were in the 2003/04 season and they have decreased in the past few seasons whilst her results in the other disciplines have improved. She has nine victories in the 10 km and seven in the pursuit. Her four other victories have been in longer races (30 km. and Vasaloppet).

Bjørgen has eight World Championship gold medals, five of them individual. Her first gold medal in the World Championships came in the individual sprint in Val di Fiemme in 2003, where she also picked up a silver in the 4 x 5 km. Her three other gold medals came in Oberstdorf in 2005 in the 30 km classical, team sprint, and 4 x 5 km. She also won a silver in the 7.5 km + 7.5 km double pursuit and a bronze in the 10 km free in the same games. At the 2007 championships in Sapporo, Bjørgen won two bronze medals in team sprint (with Astrid Jacobsen) and in the 4 x 5 km. In Holmenkollen 2011 she won the individual sprint, the pursuit, the 10 km classical, the 4 x 5 km, and a silver in the 30km. 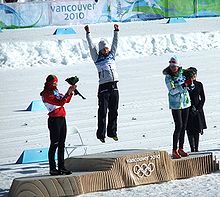 Bjørgen had a disappointing Winter Olympics in Turin. She suffered from bronchitis a week before the games started and was prescribed antibiotics, then in the first race of the games, the 7.5 km + 7.5 km double pursuit, Bjørgen withdrew during the classic phase complaining of an upset stomach. In the next event, the team sprint, Bjørgen and Hilde G. Pedersen came fourth, and despite winning a silver in the 10 km, the remainder of the games went poorly for her. The next event was the 4 x 5 km relay, where Bjørgen took the anchor leg and finished in fifth place, the first time since 1988 that Norway had failed to reach the podium in the women’s relay. In the individual sprint, Bjørgen failed to make the semi finals, and both Bjørgen and Pedersen decided not to compete in the 30 km and returned home to Norway. Afterwards she was quoted as saying she was "sick and tired of Pragelato and OL (Olympic games)".[1]

However Bjørgen recovered to win the 45 km Vasaloppet from Oxberg to Mora on the March 4, eight days after the end of the Winter Olympics. Bjørgen broke away with Hilde Pedersen and Vibeke Skofterud after only 10 km, but Skofterud could not keep up with the pace and fell back, and Bjørgen powered away from Pedersen with a few kilometres left, winning in a time of 2:17:53, 1:22 ahead of Pedersen and 3:23 ahead of Petra Majdič of Slovenia. Winning a purse of 88,000 SEK and also winning two of the three sprints during the race to add another 10,000 SEK. Then three days later on the March 7, Bjørgen finished second in the individual sprint event in Borlaenge, Sweden.

In the 2010 Olympics in Vancouver, Bjørgen finished third in the 10 km freestyle event, before winning her first Olympic gold medal in the sprint. In the sprint she was up against a very strong field which consisted of Petra Majdič of Slovenia, who had taken a serious fall earlier in the day during qualification and Justyna Kowalczyk of Poland who was leading the overall World Cup standings coming into the race. Bjørgen won her second gold in the 2 x 7.5-kilometre on 19 February 2010. Bjørgen was also part of the 4 x 5 km relay team that won gold on 25 February 2010, finishing with enough time to cross the line with a large Norwegian flag given to her by a spectator near the finish, and jumping over the finish line. She closed out her trip in Vancouver by taking silver 0.3 seconds behind Poland's Justyna Kowalczyk in the women's 30 km event.

Bjørgen won the women's 30 km event at the Holmenkollen ski festival in 2005. She won the same event five years later in 2010. This was the first World Cup event to be held at Holmenkollen since the completion of the new ski jumping hill. For her win in both the 30 km and the sprint event, along with her successes at the 2010 Games in Vancouver, Bjørgen was awarded the Holmenkollen medal.

In the World Championships 2011, held at Holmenkollen, Oslo during February and March 2011, Bjørgen won gold medals in the Sprint, the 10-kilometre classic, the 15-kilometre pursuit and the 4 x 5-kilometre relay. She also finished second to Therese Johaug in the 30-kilometre freestyle.

In the 2009/2010 season World Anti Doping Agency allowed Marit to use a stronger asthma medication which is forbidden on the WADA doping List.[2] Bjørgen continued to use the medication over the olympics 2010 and was strongly criticized by Justyna Kowalczyk who accused her of doping.[3][4] As of September 2011[update] this medication is no longer on the doping list of WADA, and can be used by any athlete.[5]