Infobox Single
Name = Take on Me 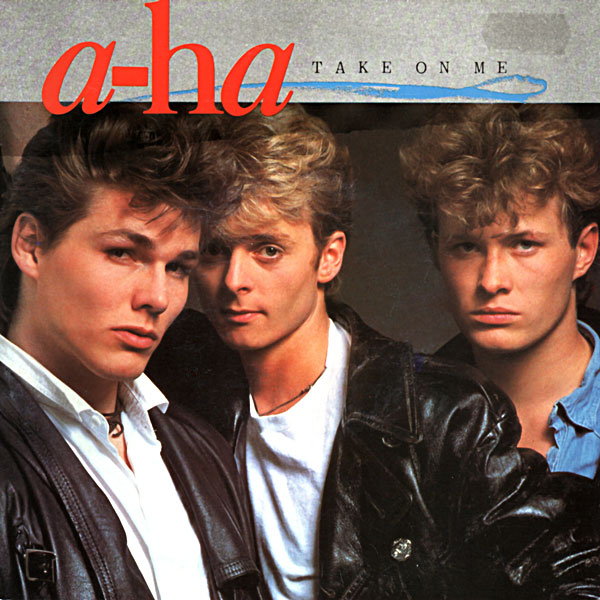 "Take on Me" is a song by the Norwegian band . The song is a track from a-ha's first album, "", released in 1985. The song was originally recorded in but was remixed for the release of the "Hunting High and Low" album.

The for the song was first broadcast in 1985 on local music video station V-66, and then subsequently on . The innovative video was an amalgamation of -style and . The video was inspired by the animated film "Commuter" created by , and the movie "". [ [http://www.a-ha.com/MEDIA/video/AHA_videoTakeOnMe.aspx Take On Me] ]

An extended mix of this song appears on the Japan-only "45 R.P.M. Club" EP. The music video of another a-ha song, "", forms a sequel of sorts.

"Take on Me" was released in the Winter of 1984 but was re-released because of its commercial failure for its first release. When the single was re-released it became the most successful song from "Hunting High and Low" with "" on the rock charts, and one of the band's most recognizable and popular songs. The song peaked at number one on the "Billboard" Hot 100 chart and number two on the . The song would be a-ha's only number one single in America. At the s on , , the video won six awards. [ [http://www.80smusiclyrics.com/artists/a-ha.htm 80s Music Lyrics: Best Music from the 1980s ] ]

The song appears in the game and all of the games.

The , directed by , utilizes extensive rotoscoping. It begins with a young woman (played by actress [ [http://www.myspace.com/buntybailey page] for actress Bunty Bailey (the female lead in the "Take on Me" music video)] ) in a London cafe, reading a about competitive motorcycle racing.

The winner of the race, played by the band's lead vocalist , winks at the girl from the page. A cartoon hand reaches through the comic book, inviting the girl to enter his animated world. Through a creative effect they both view each other through a mirror which shows them (and the band members) alternately in live action and animated.

When the waitress of the cafe comes back for the bill, she finds the girl missing and believes that she has left without paying. She angrily crumples up the comic book and throws it into the wastebasket. As this happens, two of Harket's competitors in the race come back for revenge. One, wielding a , smashes the comic frame. Harket punches one of the thugs, and retreats with the girl into a maze created by the crumpled paper. Harket tears a hole so the girl can escape as he faces the two thugs. The girl reappears on the floor next to the waste basket in the coffee shop, heavily ink-stained, to the surprise of the entire shop cliente and employees. The startled girl grabs the crumpled comic book and runs out of the coffee shop to her home, where she tries to smooth out the creases.

One of the panels shows Harket lying unconscious, and she begins to cry. Harket then wakes up and starts hitting against the edges of the panel. Suddenly, he appears in the girl's room and throws himself back and forth against the corridor walls, flashing between animated and live action. Eventually, he becomes the latter, and he and the girl embrace each other.

There is an earlier version of the music video, featuring the band in live performance.

Pop-punk band included this song on their album of covers, "". boyband A1 covered the song in 2000, and it reached #1 on the UK charts. The Argentinian electro-pop band used to sing an excerpt of the song in their live shows (it was later included on their 2005 live album, "En Vivo Sin Restricciones"). In 2007, pop trio recorded a cover of this song. Influential emo band has also covered this song, which can be found on their compilation .There is also an anonymous cover of this song in Pump it up, versions Premiere and PREX.The song was also covered by German Eurodance act Captain Jack on his first album, "The Mission".