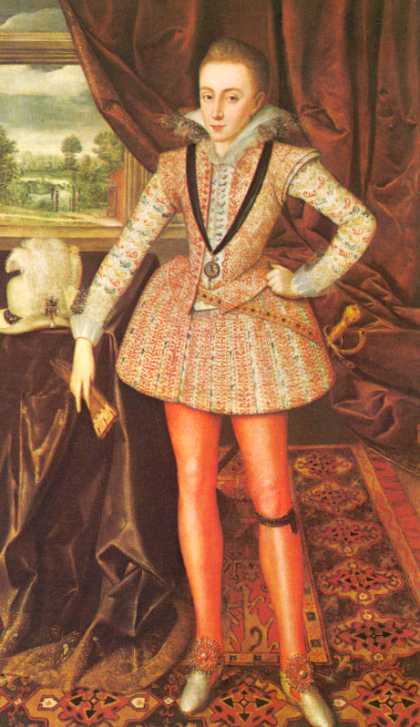 Henry Frederick Stuart, Prince of Wales ( – ) was the eldest son of James VI of Scots, I of England and . His name comes from grandfathers and .

Prince Henry was widely seen as a bright and promising heir to his father's throne. However, at the age of 18, he predeceased his father when he died of . Susequently, the heirship to the English and Scottish thrones passed to his younger brother Charles.

Many places in the were named in honor of Prince Henry before and after his death.

He was born at and became , , , and automatically on his birth. His tutor until he went to England was Sir , a - described as the King's "familiar councillor" [ " Rock in History" in "Transactions of the Antiquarian and Field Naturalists' Society", vol. 5, 1948: 55] - and he was also tutored in music by .

Following his father's accession to the throne of England in 1603, he became automatically , and was invested and in 1610, thus uniting the six automatic and two traditional Scottish and English titles held by heirs-apparent to the throne(s) ever since that date.

A a young a man, Henry showed great promise and was bginning to be active in leadership matters. Among his activities, he was responsible for the reassignment of Sir to the 's struggling colony in . However, he died from at the age of 18. (The diagnosis can be made with reasonable certainty from written records of the post-mortem examination.) Henry was buried in . Prince Henry's death was widely regarded as a tragedy for the nation, some may consider prophetic.

Upon his death, all of Henry's automatic titles passed to his younger brother, Charles, who, until then, had lived in Henry's shadow – Charles was created Prince of Wales and Earl of Carrick four years later. Charles was not as well-regarded as Henry had been, and after he assumed the throne following the death of his father in 1625 as King Charles I, his reign was marked by controversies, most notably conflicts with the English . Following several years of the , he was tried and convicted of treason and was beheaded in 1649.

Both Prince Henry's Grammar School in , , and in Evesham, in are named after him.

The developments in North America were at an important stage as Henry grew up. In the southern portion of the Colony of Virginia, a part which became now the in the United States after the some years later, three important locations were named in his honor: Cape Henry, Henricus, and Henrico:

* is located the southern point where the meets the . It was named on , by the expedition led by which established Jamestown on . The and two historic lighthouses are now located in the City of Virginia Beach adjacent to .

*Sir was recruited for the Virginia Colony through efforts of Prince Henry, a response to management and discipline problems with the earliest colonists. He became the High Marshall of Virginia, effectively the colony's highest ranking law enforcement officer. Dale was discouraged by unhealthy conditions at Jamestown's location, and sought a better site as a potential improved replacement for Jamestown. His progressive but ill-fated (named for Prince Henry) was established in 1612. Henricus became the major point of Henrico Cittie (sic) in 1619. It was destroyed during the . The long-lost site of Henricus was rediscovered in the late 20th century, and was by then located in Chesterfield County, which itself was established in 1749. Henricus is now part of a historical park.

*Present-day Henrico County was established by order of his younger brother, King Charles I, in 1634 as one of the original eight . It is located adjacent to the state capital city of Richmond, which was Henrico's for several hundred years, and became separate from it as an independent city in 1871. In the 21st century, Henrico remains extant in its original (county) political form and is regarded as one of the best-managed counties in the United States. In 1992 and again in 1993, "City and State" magazine ranked Henrico County as the second best fiscally managed county in the United States. [ [http://dickglover.com/economic.php Dick Glover - Economic Development ] ]

As Prince of Wales, Henry Frederick bore the arms of the kingdom, differenced by a "label argent of three points". [ [http://www.heraldica.org/topics/britain/cadency.htm Marks of Cadency in the British Royal Family]