The Battle of Balikpapan was the concluding stage of the Borneo campaign (1945). The landings took place on 1 July 1945. The Australian 7th Division, composed of the 18th, 21st and 25th Infantry Brigades, with support troops, made an amphibious landing, codenamed Operation Oboe Two a few miles north of Balikpapan, on the island of Borneo. The landing had been preceded by heavy bombing and shelling by Australian and US air and naval forces. The Japanese were outnumbered and out gunned, but like the other battles of the Pacific War, many of them fought to the death.

Major operations had ceased by July 21. The 7th Division's casualties were significantly lighter than they had suffered in previous campaigns. The battle was one of the last to occur in World War II, beginning a few weeks before the bombing of Hiroshima and Nagasaki effectively ended the war. Japan surrendered while the Australians were combing the jungle for stragglers.

Following the surrender the three Brigades were committed to occupation duties until around February 1946. The 21st Brigade was detached to Makassar in the Celebes Islands to accept surrender of the Japanese forces, release POWs and maintain civil order. 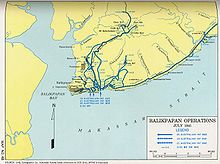 A map of the battle 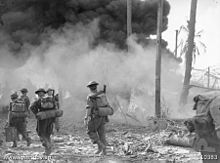 Members of the 7th Division at Balikpapan