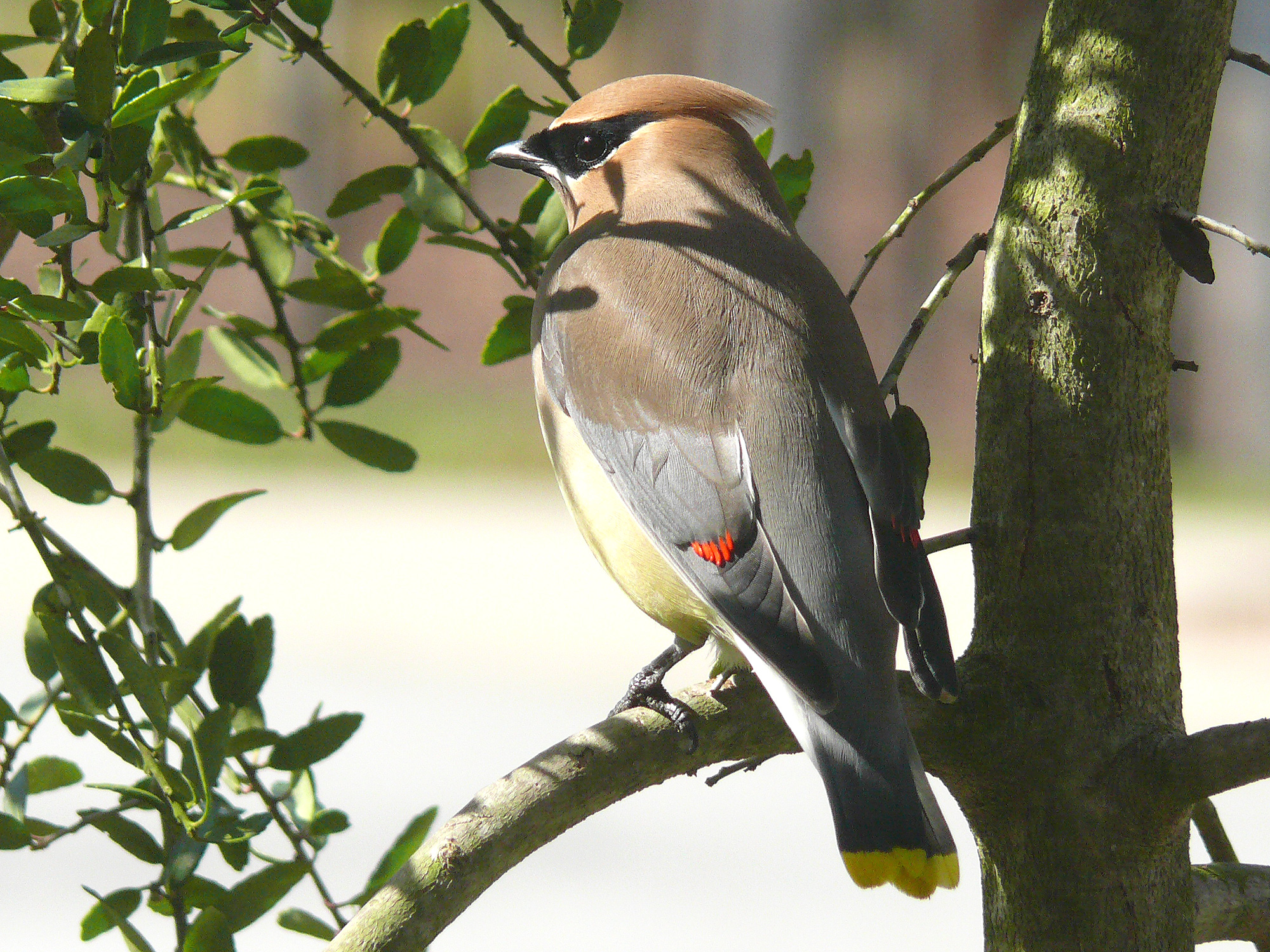 The Cedar Waxwing ("Bombycilla cedrorum") is a member of the family Bombycillidae or waxwing family of birds. It breeds in open wooded areas in , principally southern and the .

Cedar waxwings are approximately 6-7" (15-18 cm) in length and weigh roughly 30 grams. They are smaller and more brown than their close relative, the (which breeds further to the north and west).

These birds' most prominent feature is a small cluster of bright red feathers on the wings, a feature they share with the (but not the ). The tail is typically yellow or orange depending on diet. Birds that have fed on berries of introduced n s while growing tail feathers will have darker orange-tipped tail-feathers. Adults have a pale yellow belly. Immature birds are streaked on the throat and flanks, and often do not have the black mask of the adults.

During courtship the male and female will sit together and pass small objects back and forth, such as flower petals or an insect. Mating pairs will sometimes rub their bills together affectionately.

The flight of waxwings is strong and direct, and the movement of the flock in flight resembles that of a flock of small pale s.

The calls of these birds include very high-pitched whistles and buzzy trills often represented as "see" or "sree".

Outside the breedings season, Cedar Waxwings often feed in large flocks numbering hundreds of birds. This species is irruptive, with erratic winter movements, though most of the population migrates further south into the and beyond, sometimes reaching as far as northern . They will move in huge numbers if berry supplies are low. Rare vagrants have reached , and there are two recorded occurrences of Cedar Waxwing sightings in . Individual Bohemian Waxwings will occasionally join large winter flocks of Cedar Waxwings.

Birds in winter can be very confiding and will come into s for berry bushes and trees and to splash and drink from fountains or bird baths.

The Cedar Waxwing eats berries and sugary year-round, with s becoming an important part of the diet in the breeding season. Its fondness for the small cones of the Eastern Redcedar (a kind of ) gave this bird its common name.

When the end of a twig holds a supply of berries that only one bird at a time can reach, members of a flock may line up along the twig and pass berries beak to beak down the line so that each bird gets a chance to eat.

Preferred habitat consists of trees at the edge of wooded areas, or "open" forests, especially those that provide access to berry sources as well as water. Waxwings are attracted to the sound of running water, and love to bathe and drink from shallow creeks. In urban or suburban environments, waxwings often favor parkland with well-spaced trees, golf courses, cemeteries, or other landscaping with well-spaced trees, bushes that provide berries, and a water source, including fountains or birdbaths, is always a big plus.

The nest is a loose open cup built with grass and twigs, lined with softer materials and supported by a tree branch averaging 2 to 6 meters above ground but, at times, considerably higher. The outer diameter of the nest is approximately 12cm to 16cm.

During courtship, the pair may pass a flower petal or insect back and forth repeatedly. Usually 5 or 6 eggs are laid and the female incubates them for 12 to 16 days. The eggs are oval shaped with a smooth surface and very little, if any, gloss. The egg shells are of various shades of light or bluish grey with irregular, dark brown spots or greyish-brown splotches. Both parents build the nest and feed the young. Typically, there are two broods during the mating season. Young leave the nest about 14 to 18 days after hatching.

Cedar Waxwings in literature and law

According to experts on the writing of , this species almost certainly inspired the waxwing mentioned prominently in his novel "".

Waxwings are protected by law in the US and may not be kept in captivity.