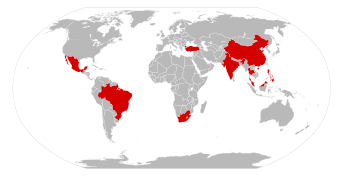 Newly industrialized countries as of 2011.

The category of newly industrialized country (NIC) is a socioeconomic classification applied to several countries around the world by political scientists and economists.

NICs are countries whose economies have not yet reached First World status but have, in a macroeconomic sense, outpaced their developing counterparts. Another characterization of NICs is that of nations undergoing rapid economic growth (usually export-oriented). Incipient or ongoing industrialization is an important indicator of a NIC. In many NICs, social upheaval can occur as primarily rural, or agricultural, populations migrate to the cities, where the growth of manufacturing concerns and factories can draw many thousands of laborers.

NICs often receive support from international organizations such as the World Trade Organization (WTO) and other internal support bodies. However, as environmental, labor and social standards tend to be significantly weaker in NICs, many fair trade supporters have advocated standards for importing their products and criticized the outsourcing of jobs to NICs.

The term began to be used circa 1970 when the Four Asian Tigers[1] of Hong Kong, Singapore, South Korea and Taiwan rose to global prominence as NICs in the 1970s and 1980s, with exceptionally fast industrial growth since the 1960s; all four regions have since graduated into advanced economies and high-income economies. There is a clear distinction between these countries and the nations now considered to be NICs. In particular, the combination of an open political process, high GNI per capita and a thriving, export-oriented economic policy has shown that these countries have now not only reached but surpassed the ranks of many developed countries.

All four economies are classified as High-income economies by the World Bank and Advanced economies by the International Monetary Fund (IMF) and U.S. Central Intelligence Agency (CIA). All of them, like Western European countries, possess Human Development Index considered as "very high" by the UN. South Korea has an outstanding performance in such group. It is the only among the Asian Tigers that is an Organisation for Economic Co-operation and Development (OECD) member. According to The Economist's Democracy Index, a non peer reviewed scale that measures the degree of democracy — as defined by the presence and fairness of elections in determining the country's regime, government transparency, civil liberties, and popular political participation — in different world countries, South Korea is, along with Japan, the only "full democracy" in Asia. Both were considered to be NICs during the 20th century, as Japan had enormous industrial growth after World War II.

The following table presents the list of countries consistently considered NICs by different authors and experts.[2][3][4][5] Turkey, and South Africa are classified as developed countries by the CIA.[6] Turkey was a founding member of the OECD in 1961 and Mexico joined in 1994. The G8+5 group is composed by G8 members plus China, India, Mexico, South Africa and Brazil.

According to Goldman Sachs review of emerging economies, by 2050 the largest economies in the world will be as follows: China, USA, India, Brazil, and Mexico.[11]

For China and India, the immense population of these two nations (each with over 1.1 billion people as of January 2009) means that per capita income will remain low even if either economy surpasses that of the United States in overall GDP. When GDP per capita is calculated according to Purchasing Power Parity (PPP), this takes into account the lower costs of living in each newly industrialized country.

Brazil, China, India, Mexico and South Africa meet annually with the G8 countries to discuss financial topics and climate change, due to their economic importance in today's global market and environmental impact, in a group known as G8+5.[12] This group is expected to be expanded to G14 by adding Egypt alongside the five forementioned countries.[13]

Each author set a list of countries accordingly to the methods or type of economic analysis. This sometimes results in a country being mentioned as NIC in a particular work, but that is rarely considered as such by the other authors. This is the case of nations such as Argentina, Chile, Egypt, Indonesia and Russia.[2]

NICs usually benefit from comparatively low labor costs, which translates into lower input prices for suppliers. As a result, it is often easier for producers in NICs to outperform and outproduce factories in developed countries, where the cost of living is higher, and labor unions and other organizations have more political sway.

This comparative advantage is often criticized by advocates of the fair trade movement.

Economic freedom is not always associated with political freedom in nations such as the People's Republic of China, where Internet censorship and human rights violations are common.[14] The case is diametrically opposite for India. While being a liberal democracy throughout its post-colonial history, India has been widely criticized for its inefficient government and widespread corruption.[15] Thus, while in China where political freedoms remain tight, the average Chinese citizen enjoys a higher standard of living than his or her counterpart in India.[16]

South Africa faces an influx of immigrants from countries such as Zimbabwe.[citation needed]