Manchester Piccadilly (Manchester London Road until 1960) is the principal railway station in Manchester, England. It serves intercity routes to London Euston, Birmingham New Street, South Wales, the south coast of England, Edinburgh and Glasgow Central, and routes throughout northern England. Two platforms for the Manchester Metrolink light rail network are located in the station's undercroft. Piccadilly is one of 18 British railway stations managed by Network Rail.

Piccadilly is the busiest station in Manchester ahead of Manchester Victoria and Manchester Oxford Road. It is the fourth busiest station in the United Kingdom outside London,[clarification needed] after Birmingham New Street, Glasgow Central and Leeds.[1][2] According to Network Rail, which manages it, over 28.5 million people use the station annually.[2]

The station received a five-year £100m refurbishment in 2002, which was the most expensive improvement on the UK rail network at the time.[3] According to an independent poll carried out in 2007, Manchester Piccadilly has the highest customer satisfaction level of any UK station, with 92% of passengers satisfied with the station; the national average was 60%.[4]

The station opened on 8 May 1842 as Store Street station and as Bank Top station, terminus of the Manchester and Birmingham Railway, which shared it from August 1844 with the Sheffield, Ashton-under-Lyne and Manchester Railway.

The station was renamed London Road station in 1847, around the time the Manchester, Sheffield and Lincolnshire Railway was formed (later to become the Great Central Railway). The Manchester, South Junction and Altrincham Railway (MSJAR) opened its line from Manchester Oxford Road railway station to London Road on 1 August 1849 and built its own platforms adjacent to the main part of the station. These platforms were referred to as the MSJAR or South Junction platforms. During the early 1880s the station was enlarged. The MSJAR platforms and the bridge over Fairfield Street were demolished and an island platform, on girder bridges, opened on 16 May 1882.

During the first two decades of the 20th century, London Road station was served by the London and North Western Railway, the Great Central Railway and, through running powers, the North Staffordshire Railway. Following the 1923 railway grouping, the station was served by the London, Midland and Scottish Railway and the London and North Eastern Railway. After nationalisation in 1948, London Road station was operated as two independent sides, separated by formidable iron railings located where platform 5 now is. On one side was the London Midland Region of British Railways; on the other was the Eastern Region.

In 1910 a second terminus, Mayfield Station, was opened to cope with passenger volume. It was closed to passenger trains by 1952 but remained in use until August 1960 for "overflow" local services and for one major passenger train, the Pines Express from Bournemouth to Manchester. It reopened as a parcels depot in 1970 but has since closed. Its disused building is visible across Fairfield Street from platforms 13 and 14.[5] 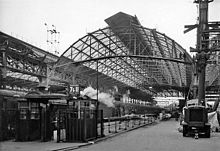 Manchester London Road Station being rebuilt in 1960. After renovation, it was renamed Manchester Piccadilly in 1960.

London Road station was renamed Manchester Piccadilly after rebuilding and it reopened on 12 September 1960 for London Midland Region electric train services to London. The MSJAR platforms and the bridges over Fairfield Street were replaced at this time. The island platforms (13 and 14) were built on top of a new pre-stressed concrete slab bridge with cantilevered sides for the tracks.

In the early 1970s, as part of the Picc-Vic tunnel project, there were proposals to build an underground station, Piccadilly Low Level.[6] The project was cancelled, and subsequent rail improvements concentrated on surface projects and the introduction of light rail.

Piccadilly's island platforms were further rebuilt and lengthened in 1988 in connection with the opening of the Windsor Link. The glass roof over the terminal platforms was completely replaced in the late 1990s. The train shed is a Grade II listed building.

In 2001-2002, as part of preparations for the 2002 Commonwealth Games the remainder of the station was rebuilt, to designs by BDP, increasing the size of the concourse and improving road access. The station's undercroft (the two levels below the main rail platforms) were converted to provide two platforms for the Manchester Metrolink tram system, which opened in 1992.

Network Rail's 'Northern Hub' plans, at a cost of over £560 million, which aim to improve the heavily congested rail network around Manchester were revealed in 2011. Two new platforms would be constructed at Piccadilly and the station linked to Manchester Victoria via the 'Ordsall Chord', a new line costing £85 million, cutting journey times on Trans-Pennine routes.[7][8]

A glass panel separates the concourse from the platforms.

The terminal consists of 12 platforms, which house terminating/originating services with a longer stopover, while the busiest part of the station consists of platforms 13 and 14, the former MSJAR platforms, now used by through services via Manchester Oxford Road to North Wales, Liverpool, North-Western England, Glasgow and Edinburgh, including through services from Manchester Airport and split into a and b sections to allow more than one train to stand at a time. These through services have shorter dwell times.

Manchester Piccadilly station is currently the terminus for Manchester Metrolink services to Bury, Altrincham, and Eccles. A service to St Werburgh's Road commenced in March 2011. The Metrolink station, in a vaulted undercroft underneath the mainline station, is one of eight serving Manchester city centre, within the system's City Zone. Trams from Piccadilly Gardens run down Aytoun Street, cross on to London Road and run a short distance on segregated track, before crossing the road and entering the undercroft through a tunnel entrance.

The station is the busiest on the Metrolink network.[citation needed] Under current arrangements, there are separate arrivals and departures platforms; after arriving passengers disembark, the empty tram runs into a reversing siding in a tunnel, where it reverses and runs up to the departure platform.[9] Previously one platform was used for arrivals from Altrincham/departures to Bury, and the other for arrivals from Bury/departures to Altrincham and all services to/from Eccles, with a crossover inside the station to allow access to and from either platform.

The tram station has been refurbished, and was the first to display the new Metrolink corporate identity unveiled in 2008.[10] Station signage bears the yellow and silver livery as applied to the new generation of trams since 2009.[11]

Piccadilly is the eastern terminus of the Metrolink system, but the track was constructed with eastward extension in mind. Proposals have been approved for a six-mile extension to Ashton-under-Lyne.[12] The reversing sidings will form part of this line, which will run out of the north side of the station through Ancoats, Sportcity, Clayton, and along Ashton New Road to Droylsden and Audenshaw.[13] Trams terminating at Piccadilly from the city centre will use a new reversing siding being built to the east side of Sheffield Street.

In the early 1980s, proposals for a light rail system were based on converting existing railway lines to light rail operation (as with the Altrincham and Bury lines). Under these plans, eastward extensions from Piccadilly would have involved running Metrolink trams along the Glossop Line (to Hadfield and Glossop) and along part of the Hope Valley Line (to Marple and Rose Hill). These plans are no longer being pursued; however, the alignment this route would have used is still protected in 2010, with BRB Residual land disposals being altered by the ORR after a year-long consultation.[citation needed] 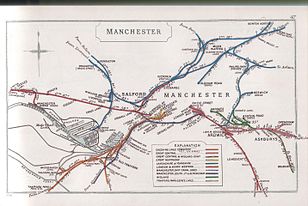 Railway Clearing House diagram of railways in Manchester in 1910 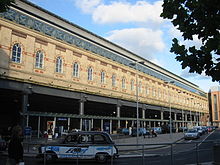 The station side-wall showing the elevation of the platforms, which are on a level with the brown brickwork 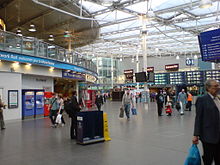 The interior of the station. 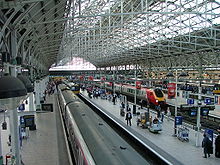 Interior shot of the station with the Victorian trainshed.

The Fairfield Street entrance, at basement level, serves the car park, taxi rank, and the Metrolink station. Above, at track level, is a concourse into which the main entrance feeds. It houses ticket offices, information points, seating, timetables, toilets, shops, and food and drink outlets. Above the concourse is a second level of food outlets and bars, and the Virgin Trains First Class Lounge. On the main concourse, glass doors within a large glass screen lead to platforms 1 to 12. A travelator leads to the upper concourse linked by footbridge, steps and lift to platforms 13 and 14. The island lounge contains retail outlets, toilets and a departure lounge. There are vending machines, waiting areas and snack bars on platforms 13 and 14.

Manchester Piccadilly is accessible for disabled people and has escalators and lifts to all levels, wide access doors and gates, braille signs and hearing loops and disabled toilet facilities.

Cycle racks are available on Fairfield Street, the long stay car park and next to the tower block at the station front. In March 2010, Manchester City Council and Network Rail unveiled plans for a 'Cycle Centre' to provide secure facilities, with maintenance and hire facilities. 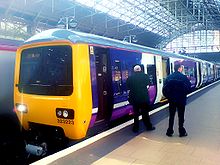 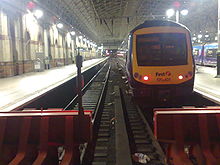 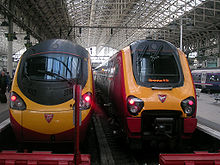