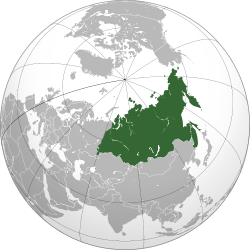 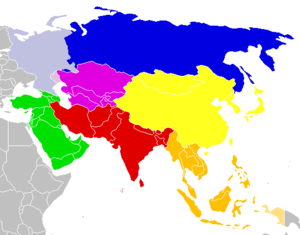 North Asia or Northern Asia is a subregion of Asia, consisting of the Asian portion of Russia. The Phillips Illustrated Atlas of the World 1988 defines it as being most of the former USSR, the part that is to the east of the Ural Mountains.[1] A definition pre-dating the USSR is an 1882 one by Keane and Temple, who defined it as "the two great administrative divisions of West and East Siberia, whose capitals are Omsk and Irkutsk respectively". It was, according to them "one vast political system, comprising nearly one-third of the whole continent, and, with a few trifling exceptions, directly administered by Russia".[2]

Further information: Demographics of Siberia and Indigenous peoples of Siberia

In 1875, Chambers reported the population of Northern Asia to be 8 million.[3] Between 1801 and 1914 an estimated 7 million settlers moved from European Russia to Siberia, 85% during the quarter-century before World War I.[4]

Most estimates nowadays are that there are around 40 million Russians and Russified Ukrainians east of the Urals. The Buryats number 445,175, which makes them the largest ethnic minority group in Siberia. There are 443,852 Yakuts (Russian Census of 2002) and about 400,000 ethnic Germans living in Siberia.[5] According to the 2002 census there are 500,000 Tatars in Siberia, but 300,000 of them are Volga Tatars who settled in Siberia during periods of colonization.[6]

There are no mountain chains in Northern Asia to prevent air currents from the Arctic flowing down over the plains of Siberia and Turkestan.[3]

The plateaux and plains of Northern Asia comprise the West Siberian lowlands; the Angara Shield, with the Taimyr Peninsula, the coastal lowlands, the Putorana Plateau, the Anabar Plateau, the Tunguska Plateau, and the Angara Plateau; and the Lena-Vilyuy Basin. [7]

The geomorphology of Asia in general is imperfectly known, although the deposits and mountain ranges are well known.[7]

To compensate for new sea floor having been created in the Siberian basin, the whole of the Asian Plate has pivoted about a point in the New Siberian Islands, causing compression in the Verkhoyansk mountains, which were formed along the eastern margin of the Angara Shield by tectonic uplift during the Mesozoic Era. There is a southern boundary to this across the northern margin of the Alpine folds of Iran, Afghanistan, India, Nepal, and Bhutan, which at the east of Brahmaputra turns to run south towards the Bay of Bengal along the line of the Naga hills and the Arakan Yoma, continues around Indonesia, and follows the edge of the continental shelf along the eastern seaboard of China. The Eurasian Plate and the North American Plate meet across the neck of Alaska, following the line of the Aleutian Trench, rather than meeting at the Bering Straits.[7]

Northern Asia is built around the Angara Shield, which lies between the Yenisey River and the Lena River. It developed from fragments of Laurasia, whose rocks were mainly pre-Cambrian crystalline rocks, gneisses, and schists, and Gondwana. These rocks can be found in the Angara Shield, the Inner Mongolian-Korean Shield, the Ordes Shield and the South-East Asia Shield. The fragments have been subject to orogenesis around their margins, giving a complex of plateaux and mountain ranges. One can find outcrops of these rocks in unfolded sections of the Shields. Their presence has been confirmed below Mesozoic and later sediments.[7]

There are three main periods of mountain building in Northern Asia, although it has occurred many times. The outer fold mountains, that are on the margins of the Shields and that only affected Asia north of the line of the Himalayas, are attributed to the Caledonian and Hercynian orogenies of the late Palaeozoic Era. The Alpine origeny caused extensive folding and faulting of Mesozoic and early Tertiary sediments from the Tethys geosyncline. The Tibetan and Mongolian plateaux, and the structural basins of Tarim, Qaidam, and Junggar, are delimited by major east-west lithospheric faults that were probably the results of stresses caused by the impact of the Indian Plate against Laurasia. Erosion of the mountains caused by this orogeny has created a large amount of sediment, which has been transported southwards to produce the alluvial plains of India, China, and Cambodia, and which has also been deposited in large amounts in the Tarim and Dzungarian basins.[7]

Northern Asia was glaciated in the Pleistocene, but this played a less significant part in the geology of the area compared to the part that it played in North America and Europe. The Scandinavian ice sheet extended to the east of the Urals, covering the northern two thirds of the Ob Basin and extending onto the Angara Shield between the Yenesei River and the Lena River. There are legacies of mountain glaciation to be found on the east Siberian mountains, on the mountains of the Kamchatka Peninsula, on the Altai, on Tien Shan, and on other small areas of mountains, ice caps remain on the islands of Severnaya Zemlya and Novaya Zemlya, and several Central Asian mountains still have individual glaciers. Siberia itself has permafrost, ranging in depths from 30m to 600 m and covering an area of 9.6 million km².[7]

Several of the mountainous regions are volcanic, with both the Koryat mountains and the Kamchatka Peninsula having active volcanoes. The Anadyr plateau is formed from igneous rocks. The Mongolian plateau has an area of basaltic lavas and volcanic cones.[7]

The Angara Shield also underlies the lowlands of the Ob River, but to the south and east in the Central Asian mountains and in the East Siberian mountains there are folded and faulted mountains of Lower Palaeozoic rocks.[7]