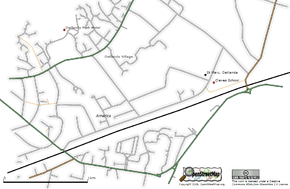 Oatlands is a village and small district near Weybridge in Surrey which has acquired its name from the Royal Tudor and Stuart Oatlands Palace, the site of which is now a luxury hotel.

The district of Oatlands contains an Iron Age burial ground, believed to be in the vicinity of St Mary Oatlands church.

The parish of Oatlands is served by the Anglican church, St Mary Oatlands. Originally a chapel built in 1862 the Parish church was ordained in 1867 when the Parish of St Mary Walton in Walton-on-Thames was divided to reflect the increase in population owing to local industrialisation. The previous vicar, Malcolm Anker, retired in May 2005 and a new vicar, Andrew Parsons, has been appointed after a period of interregnum.In 2010 a new Vicar was appointed Rev Steve Brunn. In 2012 St Mary will be celebrating 150th anniversary.