A marker beacon is a particular type of VHF radio beacon used in aviation, usually in conjunction with an instrument landing system (ILS), to give pilots a means to determine position along an established route to a destination such as a runway. From the 1930s until the 1950s, markers were used extensively along airways to provide an indication of an aircraft's specific position along the route, but from the 1960s they have become increasingly limited to ILS approach installations. They are now very gradually being phased out of service, especially in more developed parts of the world, as GPS and other technologies have made marker beacons increasingly obsolete.

There are three types of marker beacons that may be installed as part of their most common application, an Instrument Landing System:

The Outer Marker, which normally identifies the final approach fix (FAF), is situated on the same line with the localizer and the runway centerline, 4 to 7 nautical miles[citation needed] before the runway threshold. It is typically located about 1 NM (2 km) inside the point where the glideslope intercepts the intermediate altitude and transmits a 400 Hz tone signal on a low-powered (3 watts), 75 MHz carrier frequency. Its antenna is highly directional, and is pointed straight up. The valid signal area is a 2,400 ft (730 m) × 4,200 ft (1,280 m) ellipse (as measured 1,000 ft (300 m) above the antenna.) When the aircraft passes over the outer marker antenna, its marker beacon receiver detects the signal. The system gives the pilot a visual (blinking blue outer marker light) and aural (continuous series of audio tone morse code-like 'dashes') indication. Some countries, such as Canada, have abandoned marker beacons completely, replacing the outer marker with a non-directional beacon (NDB), and more recently with GPS fixes. In the United States, the outer marker has often been combined with an NDB to make a Locator Outer Marker (LOM). Some ILS approaches have no navigation aid at all situated at the final approach fix, but use other means, such as VOR radial intersections, distance measuring equipment (DME), GPS, or radar fixes, to identify the position.

A middle marker works on the same principle as an outer marker. It is normally positioned 0.5 to 0.8 nautical miles (1 km) before the runway threshold. When the aircraft is above the middle marker, the receiver’s amber middle marker light starts blinking, and a repeating pattern of audible morse code-like dot-dashes at a frequency of 1,300 Hz in the headset. This alerts the pilot that the CAT I missed approach point (typically 200 feet (60 m) above the ground level on the glideslope) has been passed and should have already initiated the missed approach if one of several visual cues has not been spotted. 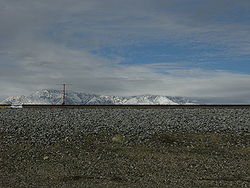 Similar to the outer and middle markers; located at the beginning (threshold) of the runway on some ILS approach systems (usually Category II and III) having decision heights of less than 200 feet (60 m) AGL. Triggers a flashing white light on the same marker beacon receiver used for the outer and middle markers; also a series of audio tone 'dots' at a frequency of 3,000 Hz in the headset.

The term fan marker refers to the older type of beacons used mostly for en-route navigation.[2][3] Recent editions of FAA's AIM publication don't mention fan markers[1] the way older editions used to,[4][5] and they appear to be an out-dated piece of technology, at least in the USA.[6]