In the Marvel Comics universe, The Symbiote (often uncapitalized as symbiote) is a specific parasitic species of extraterrestrial organism. These Symbiotes are sometimes referred to as "living costumes" because of the way the amorphous creatures envelope their hosts and can act as clothing or a costume.

The first appearance of a symbiote occurs in The Amazing Spider-Man #252 (May, 1984) in which Spider-Man brings one home to Earth after the Secret Wars (Secret Wars #8, which was released months later, details his first encounter with it). The concept was created by a Marvel Comics reader,[1] with the publisher purchasing the idea for $220.00.[2] The original design was then modified by Mike Zeck, becoming the Venom symbiote. The concept would be explored and used throughout multiple storylines, spin-off comics, and derivative projects.

The backstory to the concept of the symbiotes has never been clearly established. However some stories have shown that their species existed for millions of years prior to the arrival of the Venom symbiote on Earth.[citation needed] It is implied that Galactus, devourer of worlds, consumed a world which they had taken over and where they had thrived, based on Carnage's reaction to the Silver Surfer, former herald of Galactus. It is shown through the Carnage symbiote that this was a world whose dominant life forms had been overrun by the marauding symbiotes, though whether or not it is the world on which the symbiotes originated is never clarified.

In Venom: Seed of Darkness #1, it is stated that when Krobaa[who?] was brought to Earth it bonded with the professor that had found him to acquire (through the symbiosis) knowledge of humanity to bring the information to a high galactic order that valued "diversity of mind above all else", but Krobaa was infected with the madness of the human mind. Attacking all living things claiming to feed on their fear (much like Dreadface) and only after Eddie Brock's camera flash had weakened him, Krobaa regained control of himself and committed suicide to save other planets from the "plague of madness." 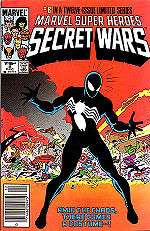 The cover of Secret Wars #8, which details Spider-Man's first encounter with the black costume. Pencil art by Mike Zeck.

The mini-series Planet of the Symbiotes presents a different story. Symbiotes were originally an unfeeling, conquering race, taking over any species they came in contact with to feed off their emotions; this mainly involved adrenaline rushes from death-defying feats and, as a consequence, the hosts tend to be short-lived. This was also evidenced in the Fantastic Four series, when a black cube (imprisoned by Devos the Devastator as a trophy of the most dangerous species he has ever faced) escapes and is revealed to be a sentient extraterrestrial symbiote (called Dreadface in the issue's title) that fuels (and then feeds off) the animosity between the Human Torch and the Thing before apparently being incinerated.

The Venom symbiote is the first permanent symbiote resident of Earth, brought by Spider-Man after the events of Secret Wars. It was later established that the Venom symbiote was considered crazy by its fellow parasites since it sought a mutual bond with a host rather than domination, and was imprisoned on a planet that later became part of Beyonder's Battleworld. Once on Earth, the Venom suit was bonded to Spider-Man for some time before being forced off onto Eddie Brock. Stung by the rejection, the symbiote came to hate the superhero and sought revenge with Brock. During this time it spawned six children; its first child would later have two of its own. Brock would soon reform and spent a considerable amount of time trying to become a hero with the suit.

Though originally happy with Brock, for reasons not entirely clear, the symbiote gradually became increasingly possessive and abusive of him, eventually being sold off by Eddie. It is later revealed that it only stuck with him because of cancer of his adrenal glands. Since then, the Venom suit has gradually grown more and more monstrous and psychotic. It is currently bonded to Flash Thompson, who struggles to control it, but the symbiote has recently been shown to be developing some slight affection for him.[3] This would suggest the host's mental state might affect the symbiote just as much as the other way around, as the Carnage symbiote is as psychotic as its host and the Venom suit's explosiveness got worse after bonding with its two hosts after Brock, both of which were career criminals. Likewise, the various symbiotes bonded to heroes are not shown to be as twisted, though they occasionally struggle with aggression.

Angel Medina claims he was reluctant to start work on Mighty Avengers because he was working on a Venom project, only to be told he would be drawing a story with "the Avengers vs. an alien invasion—by the Venoms."[4] This story arc was later confirmed to be drawn by Mark Bagley, as Medina would be unavailable.[5] Solicitations state that the New Avengers will also be part of this arc, themselves becoming infested by Symbiotes. New Avengers #34 revealed that Doctor Doom is responsible for dropping a "Venom Bomb" on New York that unleashes the Symbiotes. The story was completed in Mighty Avengers #8. Further backstory reveals that Doctor Doom collected a tiny sample of the symbiote's cells from the drone he had sent in earlier.[6] Later, it is revealed that Kristoff Vernard actually orchestrated this so that Doom would be arrested for the event above.[7]

Symbiotes empower the natural abilities of a host to the point where they far exceed that of normal members of the hosts' species. These abilities include the following:

The following are functions that have been demonstrated from various hosts' wills (but are not limited to):

Symbiotes were naturally weakened by intense sounds and intense heat - especially large fires. Additionally, in some stories and games, (mostly mentioned in the 2000 Spider-Man game), they are also weakened by magnesium. However as each new symbiote has spawned a child, a natural evolution seems to not only increase their strengths, but also reduce their weaknesses. Even already existing symbiotes can mutate and develop these resistances. Still, there has not been an invulnerable symbiote in mainstream continuity, because the newest breeds can be harmed by incredible amounts of sonic waves and heat. Also in the mainstream Marvel Universe, symbiotes are vulnerable to the heat produced by high voltage electricity.

There are other weaknesses as well. Iron Man managed to create an antidote formula that could destroy a 'symbiote' (it should be noted that these were actually just a virus-like biological organisms created by Doctor Doom originally based on the 'Venom' symbiote and were specially made as a Bio-weapon). With Venom and Carnage, authorities have been able to keep the symbiotes in check with a chemical inhibitor. The criminal Styx nearly killed the Venom symbiote with his lethal touch. Whether a symbiote can mutate and reduce the effect of these weaknesses is unknown, although Carnage claimed to have developed invulnerability to sonics. Also, when a symbiote bonded with Wolverine, it was pushed out by his advanced healing factor, although Wolverine's healing factor had no use when he was bonded to a clone of the Venom symbiote.

In some incarnations, the symbiote is depicted as requiring a certain chemical (most likely phenethylamine) to stay sane and healthy, which has been said to be found abundantly in two sources: chocolate and human brain tissue. Thus, the host is forced to steal/buy large amounts of chocolate or become an unwilling cannibal who devours the brains of those he kills. This peculiar trait has only been witnessed in the Venom symbiote. However, both Carnage and Toxin have threatened their enemies with aspirations to "eating their brains", as well as various other body parts. When Toxin teamed up with Spider-Man and Black Cat, he struggled to keep himself together, telling Spider-Man that he was only "joking" about eating the robbers' brains.

On at least one occasion, Spider-Man was able to exhaust the symbiote by taking advantage of the fact that it made its webbing out of itself; after the symbiote had already used a great deal of webbing to bind him to a bell, Spider-Man forced the symbiote to use further webbing so that it would exhaust itself like blood dripping from a wound (Although the sheer amount of webbing that the symbiote would need to use for this weakness to be exploited makes its use in a fight limited).

The following symbiotes have appeared throughout several years of Spider-Man's history, appeared in multiple mediums such as film and video games and were main characters/villains in story arcs. 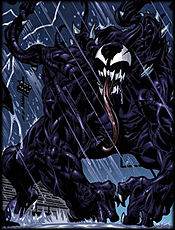 In the Ultimate Spider-Man universe, the symbiote has vastly changed. The fathers of Peter Parker and Eddie Brock Jr. had created the suit as a protoplasmic cure for cancer. The first stage would be to cover the host's body and eliminate a disease in the patient's body. Stage Two would involve the suit enhancing the wearer's strength and natural abilities. The suit was unfinished as Bolivar Trask stole the project from the scientists, but Eddie Brock Sr. saved a small sample for his son to find. Peter Parker first tried the suit on and ended up with the well-known black suit, which vastly increases his strength and agility, allowed him to heal from gunshot wounds, and use part of the protoplasm to make "webs". Though Peter could easily create 'webs' from both his hands and fingers, Eddie has only been shown to shoot webs in the comics, while in the games, Venom was shown to be restricted to creating protoplasmic tentacles. It seems as if the only weakness of the suit is extreme voltage of electricity, as it absorbed the Shocker's vibrations with no trouble; in fact, Peter found them relaxing. When the suit began to influence him mentally, making him hallucinate, Peter used electricity to get the suit off him before it merged with him permanently. It almost killed him, which goes to show the strength and attachment between the two. When "worn" by a being other than Peter Parker, such as Eddie Brock, the host is compelled to seek out and devour other human beings or else be consumed by the suit itself.

Carnage later appears as a parasite genetically engineered by Curt Conners from Peter's DNA. Because parts of the Venom suit still existed in Peter's blood, the lifeform has many of the same gelatinous properties of its predecessor, though it usually maintained a solid form due to having Peter's memories. Like the Venom suit it goes around devouring people (though it does not require a host), including Gwen Stacy. It attempts to absorb Peter to become whole, but is thrown into a fire stack during their fight and killed. It later reappears in the form of Gwen Stacy, and during an encounter with Venom, the latter absorbs the Carnage suit into itself, leaving behind a normal and healthy Gwen clone, and making Venom "complete" though more monstrous than ever before. At this point it appears that the Venom suit no longer needs to feed. 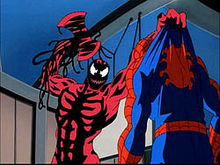 Carnage in Spider-Man: The Animated Series.

Venom in The Spectacular Spider-Man.