Guayaquil
This article is about the city of Guayaquil. For the canton named after this city, see Guayaquil (canton).

Guayaquil (pronounced: [ɡwaʝaˈkil]), officially Santiago de Guayaquil (pronounced: [sanˈtjaɣo ðe ɣwaʝaˈkil]), is the largest and the most populous city in Ecuador,with about 2.3 million inhabitants in the city and nearly 3.1 million in the metropolitan area, as well as that nation's main port. The city is the capital of the Ecuadorian province of Guayas and the seat of the namesake canton. 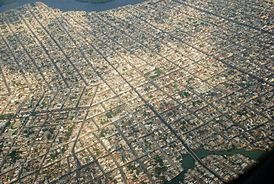 Guayaquil is located on the western bank of the Guayas River, which flows into the Pacific Ocean at the Gulf of Guayaquil. Because of its location, the city is the center of Ecuador's business and manufacturing industries. 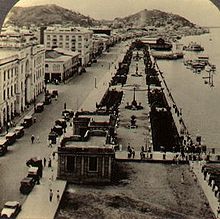 Guayaquil was founded on July 25, 1538[2] with the name Muy Noble y Muy Leal Ciudad de Santiago de Guayaquil (Most Noble and Most Loyal City of St. James of Guayaquil) by Spanish Conquistador Francisco de Orellana. Even before it was founded by the Spanish, it already existed as a native village.

In 1687, Guayaquil was attacked and looted by English and French pirates under the command of George d'Hout (English) and Picard and Groniet (Frenchmen). Of the more than 260 pirates, 35 died and 46 were wounded; 75 defenders of the city died and more than 100 were wounded. The pirates took local women as concubines.

In 1709, the English captains Woodes Rogers, Etienne Courtney, and William Dampier along with 110 other pirates, looted Guayaquil and demanded ransom; however, they suddenly departed without collecting the ransom after an epidemic of yellow fever broke out.

On October 9, 1820, almost without bloodshed, a group of civilians, supported by soldiers from the "Granaderos de Reserva", a battalion quartered in Guayaquil, overwhelmed the resistance of the Royalist guards and arrested the Spanish authorities. Guayaquil declared independence from Spain, becoming Provincia Libre de Guayaquil, and José Joaquín de Olmedo was named Jefe Civil (Civilian Chief) of Guayaquil. This would prove to be a key victory for the Ecuadorian War of Independence.

On July 26, 1822, José de San Martín and Simón Bolívar held a famous conference in Guayaquil to plan for the independence of Spanish South America.

In 1829, the city was invaded by the Peruvian Army, which occupied it for seven months.

In 1860, the city was the site of the Battle of Guayaquil, the last of a series of military conflicts between the forces of the Provisional Government, led by Gabriel García Moreno and General Juan José Flores, and the forces of the Supreme Chief of Guayas, General Guillermo Franco, whose government was recognized as possessing sovereignty over the Ecuadorian territory by Peruvian president Ramón Castilla.

Large portions of the city were destroyed by a major fire in 1896.

Tower blocks in the city

Present-day Guayaquil continues its tradition of trade, although the city is expanding its tourism base, by beautifying the city.[citation needed] This process has taken years, comprising the last two municipal administrations, who succeed in turning Guayaquil into a national and international tourist destination. It is now a headquarters for fairs and international events.[citation needed]

Guayaquileños' main sources of income are: formal and informal trade, business, agriculture and aquaculture. Most commerce consists of small and medium businesses, adding an important informal economy occupation that gives thousands of guayaquileños employment.[3] Despite this, Guayaquil is the city with the highest rate of underemployment (about 40% of the economically active population) and unemployment (about 11% of the economically active population) of Ecuador.[citation needed]

Guayaquil maintains an infrastructure for import and export of products with international standards. Among its major trading points are the Seaport, the largest in Ecuador and one of the biggest influx of shipping on the shores of the Pacific and José Joaquín de Olmedo International Airport. Additionally, it has an infrastructure of roads to other cities and provinces, which are considered among the best in the country.

On going projects seek urban regeneration as a principal objective to the growth of the city's commercial districts, as the increase of capital produces income. These projects in the city driven by the recent mayors have achieved this goal after investing large sums of money. The current municipal administration aims to convert Guayaquil into a place for first-class international tourism and business multinationals.[4]

Guayaquil features a tropical savanna climate. The climate is hot and generally humid throughout the year with little variation in average temperatures. Rainfall is heavy between January and April, during el Nino years rainfall may increase dramatically and flooding usually occurs. Typically however, rainfall is minimal from May until mid December due to the cooling influence of the Humboldt Current. 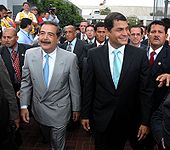 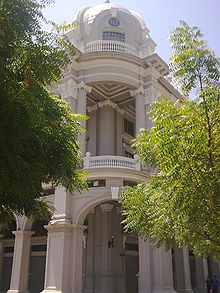 Guayaquil's current mayor is Jaime Nebot, a well-known member of the political party Partido Social Cristiano. Jaime Nebot began a campaign of construction projects for the city in the late 1990s to attract tourism, that included the "urban regeneration", which reconstructed the city in all levels including sidewalks, parks, sewer system, it took the power and telephone lines underground, it saw a lot of reconstruction of the city's chaotic transit system with the construction of multiple infrastructures (streets, speedways, overhead passages, tunnels, etc.).[citation needed]

In August 2006, the city's first bus rapid transit system, Metrovia, opened to provide a quicker, high-capacity service. One of the main projects was called Malecón 2000 [maleˈkon doz ˈmil], the renovation of the promenade (malecón) along the Guayas River with the addition of a boardwalk in 2000. Another project was the creation of the Nuevo Parque Histórico, a park in a housing development area that is called Entre Ríos because it lies between the Daule and Babahoyo rivers (which confluence to form the Guayas river), in a mangrove wetland area. The park cost the city about 7 million dollars. 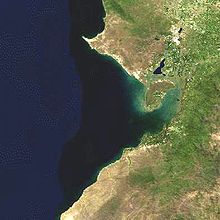 Guayaquil, Ecuador, the nation's largest city and the capital of Guayas Province. It is on the Guayas River about 40 miles (64 km) north of the Gulf of Guayaquil, near the Equator. Guayaquil is Ecuador's chief port and principal commercial and manufacturing center. An international airport and the only railway to the nation's interior serve the city.

Landmarks include the cathedral and the church of San Francisco. Among educational institutions are the University of Guayaquil (founded in 1867) and the Catholic University of St. James (1962).

Ecuadorian ceviche, made of shrimp, lemon and tomato sauce

Typical Guayaquil cuisine includes mostly seafood dishes such as encebollado and ceviche. The most traditional dish of Guayaquil is Arroz con Menestra y Carne Asada (Rice with lentils and grilled beef).[8] Churrasco is also a staple food of Guayaquil.

Ecuador is known for its artists and its place in art history. Many of them were born in Guayaquil, such as: 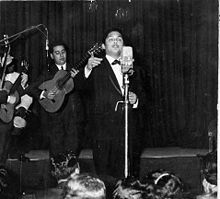 Other notable people from Guayaquil include: 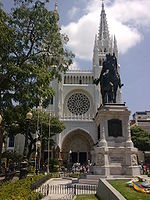 As in many other cities from Ecuador, Guayaquil inherited the catholic organization from the colonial Spanish times and was divided in parishes. Nonetheless, many of the original religious and historic buildings tied to those parishes were destroyed by fires and the attack of English, French, and Dutch pirates. Today, very few remains of religious colonial architecture are present and in all cases have been altered without preserving their originality. The oldest church of Guayaquil, rebuilt many times though, is the "Iglesia de Santo Domingo".

Guayaquil has a cathedral and many other Roman Catholic churches. Approximately 80% of Guayaquileños are Catholics, however, several Protestant groups are also present, such as the Evangelical Church with about 150,000 members.

Many other faiths and religions are represented throughout the city. There are a temple and many chapels of the Church of Jesus Christ of Latter-day Saints. There is a small Jewish community, composed mostly of Israeli citizens, and German immigrants who fled Germany during the Second World War. Guayaquil is home to the only Messianic synagogue in coastal Ecuador. 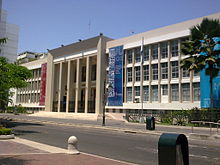 There are two major soccer clubs; the Barcelona Sporting Club and the Club Sport Emelec. Both clubs have their own stadiums; the Estadio Monumental Isidro Romero Carbo is the home of the "Barcelonistas" while the Estadio George Capwell is the home of the "Emelecistas". These two teams have a long history of rivalry in Guayaquil and when these two teams play against each other the game is called "El Clásico del Astillero". (Emelec is short for "Empresa Electrica del Ecuador" – the team was sponsored by the electric power company when founded.)

The city is the home of Andrés Gómez and Nicolás Lapentti, Ecuador's two most famous tennis players, now both retired. The "Abierto de Tenis Ciudad de Guayaquil" is a tennis tournament organised in Guayaquil by Gómez and Luis Morejon, and held annually in November.

Another major event in the city is the Guayaquil Marathon, organised by DM3, which is held every year on the first weekend of October since 2005. These race is certified by the (AIMS) Association of International Marathons and Distance Races.

Some of Guayaquil's main universities are: 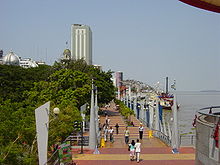 The Malecón 2000 is a restoration project of the historic Simón Bolívar Pier. It will be a symbolic centre of the city, a mix of green areas and shopping. The tall ship Guayas has its home base here.

The Palacio Municipal is located in front of the Malecón and holds the political offices of city and provincial officials. Built in a neoclassical style, it is considered one of the most important architectural works in the country.

Las Peñas is a neighbourhood in the northeast corner of the city centre; is the artistic centre of the city. Many of the area's 400-year-old houses have been converted into art galleries and several notable artists have studios in the area.

The Mercado Artesanal is the largest artisan market in the city. The market is housed in a 240-shop building that takes up the entire block of Baquerizo Avenue, between Loja and Juan Montalvo streets. Its many vendors sell indigenous crafts, jewellery, and paintings.

Parque Centenario is located on 9 de Octubre street, between Lorenzo de Garaycoa and Pedro Moncayo. This is the largest park in the town centre, occupying four city blocks. It offers shady refuge from the equatorial sun, with large trees arching over the walkways and lawns. A large Statue of Liberty dominates the central area of the park.

Parque Seminario (also known as Parque de Las Iguanas or Iguana Park) located on 10 de Agosto Avenue and Chile Avenue, is home to many iguanas, some of which approach 5 feet in length. Tourists and locals alike often feed the iguanas mango slices from park vendors. There is also a pond filled with colourful Japanese Tilapia. An equestrian statue of Simón Bolívar is located in the centre of the park.

Urdesa is a traditional neighborhood, for restaurants, stores.

Bahia is a popular marketplace for toys, clothing, electronic goods, DVDs, and CDs.

Guayaquil has city partnerships with the following cities and/or regions: