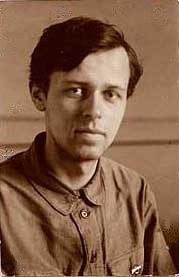 Andrei Dmitrievich Sakharov ( _ru. Андре́й Дми́триевич Са́харов) (May 21, 1921 – December 14, 1989) was an eminent Soviet nuclear , and activist. Sakharov was an advocate of and reforms in the Soviet Union. He was awarded the in 1975.

Sakharov was born in on May 21, 1921. His father was Dmitri Ivanovich Sakharov, a private school physics teacher and an amateur . Dmitri's grandfather Ivan had been a prominent lawyer in Tsarist Russia who had displayed respect for social awareness and humanist principles (including advocating the abolition of capital punishment) that would later influence his grandson. Sakharov's mother was Ëkaterina Alekseyevna Sakharova ("née" Sofiano and of Greek ancestry). His parents and his paternal grandmother, Maria Petrovna, largely shaped Sakharov's personality. Although his paternal great-grandfather had been a priest in the , and his pious mother did have him baptised, his father was an atheist and religion did not play an important role in his life, though he did believe that a non-scientific "guiding principle" governed the universe and human life.

Sakharov entered in 1938. Following evacuation in 1941 during the Great Patriotic War, he graduated in , in today's . He was then assigned laboratory work in . During this period, in 1943, he married Klavdia Alekseyevna Vikhireva, with whom he raised two daughters and a son before she died in 1969. He returned to Moscow in 1945 to study at the Theoretical Department of FIAN (the Physical Institute of the Soviet Academy of Sciences). He received his Ph.D. in 1947.

On 's end, Sakharov researched s. In mid-1948 he participated in the under . The first Soviet atomic device was tested on August 29, 1949. After moving to in 1950, Sakharov played a key role in the next stage, the development of the . The first Soviet fusion device was tested on August 12, 1953, using what was called the design. In 1953, he received his D.Sc. degree, was elected a full member of the Soviet Academy of Sciences, and was awarded the first of his three titles. Sakharov continued to work at Sarov, playing a key role in the development of the first megaton-range Soviet hydrogen bomb using a design known as "Sakharov's Third Idea" in Russia and the in the United States. It was first tested as in 1955. A larger variation of the same design which Sakharov worked on was the 50MT of October 1961, which was the most powerful device ever exploded.

In 1950 he also proposed an idea for a controlled reactor, the , which is still the basis for the majority of work in the area. Sakharov, in association with , proposed confining extremely hot ionized plasma by shaped s for controlling that led to the development of the tokamak device.

In 1951 he invented and tested the first s, [A.D. Sakharov: "Magnetoimplosive generators", UFN "88":4, 725-734 (1966); Sov. Phys. Uspekhi "9": 294-299 (1966).] compressing magnetic fields by explosives. He called these devices MC or MK (for "magnetocumulative") generators. The radial MK-1 produced a pulsed magnetic field of 25 megagauss (2500 teslas). The following helical MK-2 generated 100 million s in 1953. Sakharov then tested a MK-driven "plasma cannon" where a little aluminium ring was vaporized due to the huge s into a stable, self-confined toroidal shot to 100 km/s. Sakharov later suggested to replace the copper coil in MK generators by a big superconductor to magnetically compress and focus underground nuclear explosions into a effect. He theorized this could focus 1023 s per second on a 1 mm2 surface, then envisaged to make two such beams collide. But it is not known if any experiment based on this idea has been ever achieved.

From the late-1950s Sakharov had become concerned about the moral and political implications of his work. Politically active during the 1960s, Sakharov was against . Pushing for the end of atmospheric tests, he played a role in the 1963 , signed in Moscow. In 1965 he returned to fundamental science and began working on cosmology but continued to oppose political discrimination.

The major turn in Sakharov’s political evolution started in 1967, when defense became a key issue in US–Soviet relations. In a secret detailed letter to the Soviet leadership of July 21, 1967, Sakharov explains the need to "take the Americans at their word" and accept their proposal "for a bilateral rejection by the USA and the Soviet Union of the development of antiballistic missile defense", because otherwise an arms race in this new technology would increase the likelihood of nuclear war. He also asked permission to publish his manuscript (which accompanied the letter) in a newspaper to explain the dangers posed by this kind of defense. The government ignored his letter and refused to let him initiate a public discussion of ABM in the Soviet press.

In May 1968 he completed an essay, "Reflections on Progress, Peaceful Coexistence, and Intellectual Freedom", where the anti-ballistic missile defense is featured as a major threat of world nuclear war. After this essay was circulated in and then published outside the Soviet Union, Sakharov was banned from all military-related research and Sakharov returned to FIAN to study fundamental theoretical physics. In 1970 he, along with and , was one of the founders of the and came under increasing pressure from the regime. He married a fellow human rights activist, , in 1972.

In 1973 he was nominated for the and in 1974 was awarded the . He was awarded the Nobel Peace Prize in 1975, although he was not allowed to leave the Soviet Union to collect it. His wife read his speech at the ceremony in , .

Sakharov's ideas on social development led him to put forward the principle of human rights as a new basis of all politics. In his works he declared that "the principle 'what is not prohibited is allowed' should be understood literally", denying the importance and validity of all moral or cultural norms not codified in the laws. He was arrested on January 22, 1980, following his public protests against the in 1979 and was sent to in the city of Gorky, now , a that was inaccessible to foreign observers.

Between 1980 to 1986, Sakharov was kept under tight Soviet police surveillance. In his memoirs he mentions that their apartment in Gorky was repeatedly subjected to searches and heists. He remained isolated but unrepentant until December 1986 when he was allowed to return to Moscow as initiated the policies of and . There, in secret, he met and worked with Western scientists such as Fact|date=April 2008.

In 1988 Sakharov was given the International Humanist Award by the .

He helped to initiate the first independent legal political organizations and became prominent in the Soviet Union's growing political opposition. In March 1989, Sakharov was elected to the new parliament, the All-Union Congress of People's Deputies and co-led the democratic opposition.

Soon after 9:00 pm on December 14, 1989, Sakharov went to his study to take a nap before preparing an important speech he was to deliver the next day in the Congress. His wife went to wake him at 11:00 pm as he had requested but she found Sakharov dead on the floor. A sudden heart attack had taken his life at the age of 68. [Coleman, Fred, "The Decline and Fall of the Soviet Empire: Forty Years That Shook the World, from Stalin to Yeltsin", p. 116. New York: St. Martin's, 1997.] He was interred in the in Moscow.

The , established in 1988 and awarded annually by the for people and organizations dedicated to human rights and freedoms, was named in his honor.

An Andrei Sakharov prize is also to be awarded by the every second year from 2006, "to recognize outstanding leadership and/or achievements of scientists in upholding human rights".

The Andrei Sakharov Archives and Human Rights Center, established at in 1993, are now housed at .

; Places
* In , there is Sakharov Boulevard, Sakharov Museum, and Sakharov Center.
* During the 1980s, the block of 16th Street NW between L and M streets, in front of the Soviet embassy, in was renamed "Andrei Sakharov Place" as a form of protest against his 1980 arrest and detention.
* In , the capital of former-Soviet , Sakharov Square, located in the heart of the city, is named after him.
* The (est. 1990) are located at the entrance to , , off the Jerusalem–Tel Aviv Highway. [ ru icon. [http://www.sakharov-center.ru/museum/exhibitionhall/sadi-s.htm Photo exhibition "Sakharov Gardens"] (sakharov-center.ru)] There is also a street named after him in , .
* In , there is a [http://www.admgor.nnov.ru/english/museums.eng.html Sakharov Museum] in the apartment on the first floor of the 12-storeyed house where the Sakharov family lived for seven years.
* In , his monument stands in Sakharov Square, and there is a Sakharov Park.
* In 1979, an ——was named after him.
*A public square in in front of the Press House is named after Sakharov. The square was named in 1991 March 16, as the Press House was still occupied by the Soviet Army.

; In fiction
*Sakharov and the "Sakharov Drive" were mentioned in 's novel "". The drive is not described in detail and the principles on which it is based (presumably imagined by Sakharov) are not given.
*Sakharov is mentioned briefly in 's .
*One of the Enterprise-D shuttlecraft in "" is named for him.
*The game has a minor character named after him who is also a scientist.

* "In this pamphlet, advanced for discussion by its readers, the author has set himself the goal to present, with the greatest conviction and frankness, two theses that are supported by many people in the world. These are:
*# The division of mankind threatens it with destruction… Only universal cooperation under conditions of intellectual freedom and the lofty moral ideals of socialism and labor, accompanied by the elimination of dogmatism and pressure of the concealed interests of ruling classes, will preserve civilization…
*# The second basic thesis is that intellectual freedom is essential to human society — freedom to obtain and distribute information, freedom for open-minded and unfearing debate and freedom from pressure by officialdom and prejudices. Such a trinity of freedom of thought is the only guarantee against an infection of people by mass myths, which, in the hands of treacherous hypocrites and demagogues, can be transformed into bloody dictatorship. Freedom of thought is the only guarantee of the feasibility of a scientific democratic approach to politics, economics and culture." ("Reflections on Progress, Peaceful Coexistence, and Intellectual Freedom", in ", July 22, 1968) [ [http://www.aip.org/history/sakharov/essay.htm The opening paragraphs of Sakharov's Reflections on Progress, Peaceful Coexistence, and Intellectual Freedom ] ]
* "I foresee a universal information system (UIS), which will give everyone access at any given moment to the contents of any book that has ever been published or any magazine or any fact. The UIS will have individual miniature-computer terminals, central control points for the flood of information, and communication channels incorporating thousands of artificial communications from satellites, cables, and laser lines. Even the partial realization of the UIS will profoundly affect every person, his leisure activities, and his intellectual and artistic development. …But the true historic role of the UIS will be to break down the barriers to the exchange of information among countries and people." (Saturday Review/World, August 24, 1974)