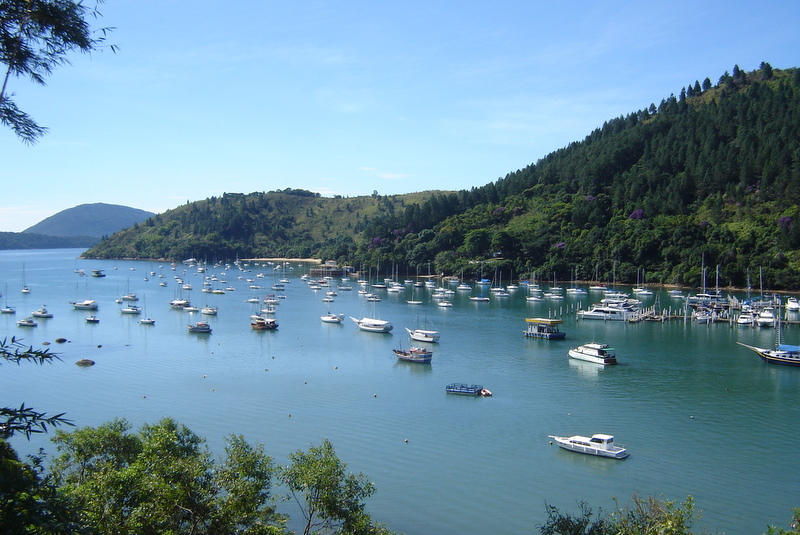 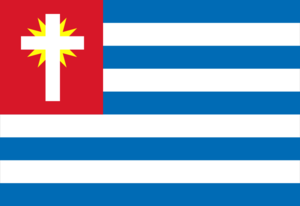 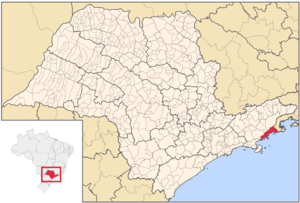 Ubatuba is linked with the Rodovia Longitudinal or the BR-101 and is also located east of and east/north/east of Santos and west of . The city lies within the .

The urban area is mainly concentrated in the Atlantic and valley areas. Much of the land to the north is forested and mountainous, forming a part of the mountains. The covers 83% of the city and rarely has connecting roads through the mountain range. A marine park was created under (Project Tamar) to protect . In addition, the operates the Clarimundo de Jesus research base in Ubatuba.

Ubatuba is an important touristic city, receiving tourists from many parts of Brazil. Ubatuba features over 70 beaches. Some of these are Maranduba, Lázaro, Itamambuca, Vermelha, Grande, Enseada, Perequê, Saco da Ribeira and many more. Ubatuba also features an island named Anchieta after , a preserved area since , .

The origin of the name comes from the Tupi words "uyba" (arrows or canoes) and "tuba" (many). Ubatuba was the place where the Portuguese signed the first treaty of peace of the Americas with the Tupinamba Indians (The Treaty of Peace of Yperoig - Tratado de Paz de Iperoig), a treaty that kept Brazil in Portuguese hands, with only one language and one faith (Catholicism). Back in the 16th century the Tupinamba families had been put into slavery, working on sugar cane plantations along the Southern Shores surrounding the towns of Saint Vincent and Itanhaém, a region also called "Morpion" at that time (according to - "Singularités de la France Antarctique").

The Tupinamba responded to this outrage with the , a powerful military alliance that could destroy Saint Vincent, with the help of the French who had founded a Protestant refugee colony, in Guanabara Bay before the foundation of Rio de Janeiro. The Portuguese setw two Jesuit priests, Fathers Anchieta and Nobrega, to Ubatuba (a tribe named Yperoig), to make peace with the Tupinamba Indians. Anchieta was kept as a hostage and Nobrega got back to Saint Vincent along with the Chief to make arrangements for the final Treaty. The Portuguese won, destroying France Antarctique and keeping the land.