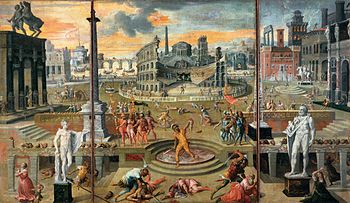 The Massacres of the Triumvirate, 1566, by Antoine Caron (Louvre Museum)

A triumvirate (from Latin, "of three men") is a political regime dominated by three powerful individuals, each a triumvir (pl. triumviri). The arrangement can be formal or informal, and though the three are usually equal on paper, in reality this is rarely the case. The term can also be used to describe a state with three different military leaders who all claim to be the sole leader.

Originally, triumviri were special commissions of three men appointed for specific administrative tasks apart from the regular duties of Roman magistrates. The triumviri capitales, for instance, oversaw prisons and executions, along with other functions that, as Andrew Lintott notes, show them to have been "a mixture of police superintendents and justices of the peace."[1] The capitales were first established around 290–287 BC.[2] They were supervised by the praetor urbanus. These triumviri, or the tresviri nocturni,[3] may also have taken some responsibility for fire control.[4]

Three-man commissions were also appointed for purposes such as establishing colonies (triumviri coloniae deducendae) or distributing land.[5] Triumviri mensarii served as public bankers;[6] the full range of their financial functions in 216 BC, when the commission included two men of consular rank, has been the subject of debate.[7] Another form of three-man commission was the tresviri epulones, who were in charge of organizing public feasts on holidays. This commission was created in 196 BC by a tribunician law on behalf of the people, and their number was later increased to seven (septemviri epulones).[8]

In the late Republic, two three-man political alliances are called triumvirates by modern scholars, though only for the second was the term triumviri used at the time to evoke constitutional precedents:

In various municipalities under the Principate, the chief magistracy was a college of three, styled triumviri.

Despite the Three Excellencies—including the Chancellor, Imperial Secretary, and irregularly the Grand Commandant—representing the most senior ministerial positions of state, this triumvirate was supported by the economic technocrat and Imperial Secretary Sang Hongyang (d. 80 BC), their political lackey. The acting Chancellor Tian Qianqiu was also easily swayed by the decisions of the triumvirate.[11]

The Three Excellencies existed in Western Han (202 BC – 9 AD) as the Chancellor, Imperial Secretary, and Grand Commandant, but the Chancellor was viewed as senior to the Imperial Secretary while the post of Grand Commandant was vacant for most of the dynasty. After Emperor Guangwu established the Eastern Han (25–220 AD), the Grand Commandant was made a permanent official while the Minister over the Masses replaced the Chancellor and the Minister of Works replaced the Imperial Secretary. Unlike the three high officials in Western Han when the Chancellor was senior to all, these new three senior officials had equal censorial and advisory powers. When a young or weak-minded emperor ascended to the throne, these Three Excellencies could dominate the affairs of state. There were also other types of triumvirates during the Eastern Han; for example, at the onset of the reign of Emperor Ling of Han (r. 168–189), the General-in-Chief Dou Wu (d. 168), the Grand Tutor Chen Fan (d. 168), and another prominent statesman Hu Guang (91–172) formed a triumvirate nominally in charge of the Privy Secretariat, when in fact it was a regent triumvirate overseeing the affairs of state and Emperor Ling.[12]

The title was revived a few times for (short-lived) three-headed political 'magistratures' in post-feudal times.

When the French revolutionaries turned to several Roman Magistrature names for their new institutions, the three-headed collective Head of State was named Consulat, a term in use for two-headed magistratures since Antiquity; furthermore it included a "First Consul" who was not an equal, but the de facto solo head of state and government- a tyrannical position Napoleon Bonaparte chose to convert openly into the First French Empire.

Prior to Napoleon and during the Terror Robespierre, Louis de Saint-Just, and Couthon, as members of the governing Committee of Public Safety, were purported by some to have formed an unofficial triumvirate. Although officially all members of the committee shared equal power the three men's friendship and close ideological base led their detractors to declaim them as 'triumvirs' which was used against them in the coup of 9 Thermidor.

Eric Schmidt, CEO of Google has referred to himself, along with founders Larry Page and Sergey Brin as part of a triumvirate, stating, "This triumvirate has made an informal deal to stick together for at least 20 years".[citation needed]

In the early days of national struggle and before Gandhi, the Indian National Congress was known to be under Lal-Bal-Pal i.e. Lala Lajpat Rai, Bipin Chandra Pal and the leading of the three Balgangadhar Tilak often dubbed Lokmanya Tilak.

See also List of Troikas in the Soviet Union

Beyond the United Kingdom, fifteen commonwealth realms of Queen Elizabeth II a non-resident yet de jure head of state who is represented by a resident Governor-General who carries out the day to day duties of the Monarch in respect to each realm and as such is defacto head of state, but whose actions are almost always under the advisement of the national Prime Minister who is head of government and who actually exercises the real powers of the crown.

After the Lisbon Treaty came into force from 1 December 2009:

The word has been used as a term of convenience, though not an official title, for other groups of three in a similar position :

In The Star Wars Expanded Universe, there have been several notable Triumvirates, including the Sith Triumvirate of Darths Traya, Nihilus, and Sion, and the Imperial Triumvirate of Moff Disra, Major Tierce, and Flim.

The Advocacy of the War of the Worlds TV series, three aliens who made up a triumvirate to guide and counsel the lower classes. In the television series The Pretender, a shadowy council, called the Triumvirate, headquartered in Africa, were apparently the powers that be of the mysterious Centre and were concerned about a prophecy involving Jarod. In Captain Scarlet and the Mysterons, the episode Codename Europa features the Triumvirate of Europe. The Commonwealth Triumvirate in Andromeda describes the leading arrangement of the All Systems Commonwealth. Controlled by 3 triumvirs, Tri-Jema, Tri-Lorn and Tri-Ortiz, who was replaced by her sister, Tri-Camille

In the Anita Blake, Vampire Hunter Series by Laurell K. Hamilton, Anita Blake forms a triumvirate between herself (a necromancer/animator), Jean-Claude (a master vampire) and Richard (a werewolf). There are three other triumvirates in the series. One in The Killing Dance consisting of Sabin, Cassandra and Dominic and the other in Burnt Offerings consisting of Padma, Thomas and Gideon.Anita also forms a triumvirate with Nathaniel and Damian. In the Halo novel series and video games, the Prophets of Truth, Mercy and Regret (ruling heads of the Covenant) are considered a triumvirate. In Dario Argento's supernatural horror trilogy (The Three Mothers Trilogy), three centuries-old women who are credited with creating witchcraft, are considered a triumvirate. Mater Suspiriorum, Mater Tenebrarum, and Mater Lachrymarum make up the triumvirate of witches who "rule the world".

In the DC Universe, specifically in the series of Etrigan the Demon, the Triumvirate rule Hell. In Neil Gaiman's The Sandman series of graphic novels hell is ruled by a triumvirate of Lucifer, Beelzebub, and Azazel (although this appears to be a new occurrence as Dream seems shocked when he is informed of this.) Etrigan appears here as Dream's guide in Hell. Indeed, in the Hellblazer series, exists another triumvirate, composed of The First, The Second, and The Third of the Fallen, though it has been debated if the Second and Third are Beelzebub and Azazel, as they're truly similar in personalities and appearance. This triumvirate was ursuped from their thrones by the Lucifer triumvirate, being the fallen angel more powerful than the First and his own triumvirate. After, Lucifer's abdication, the First regained power with the two other fallens. This triumvirate is notorious for being particular enemies and hate John Constantine, which tricked them to cure his cancer.

In the video game Onimusha: Dawn of Dreams, the three Genma (demon) leaders, Claudius the Chancellor, Rosencrantz the Scientist and Ophelia the Priestess formed what was known as the Triumvirate. Throughout the game they worked together to resurrect the Genma God of Light, Fortinbras. In the video game Tomb Raider and Tomb Raider: Anniversary Natla, Qualopec and Tihocan form the triumvirate of the Atlantis. In the video game The Elder Scrolls III/The Morrowind Prophesies a triumvirate takes place between the three tribes of the Dunmer peoples.

Other triumvirates also appear in the Robotech series, in Orson Scott Card's Ender Series, in Alastair Reynolds's Revelation Space series, in the 1984, 1990 and 1993 Sentai Series Choudenshi Bioman, Chikyuu Sentai Fiveman and Gosei Sentai Dairanger Respectively, and in the Dragonlance Universe. The most powerful super-villains (all three being terrorists who rule countries) in the Duck-Girl or Bon Comics universe, War Pig, Sorcero, and Regent Ruin are called the 'Triumvirate' by their enemies, the super-heroes and Lindalinos.

Triumvirates are commonly used as a form of alliance government in the online nation simulator, Cybernations.