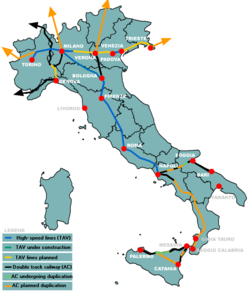 Treno Alta Velocità SpA is special purpose entity owned by RFI (itself owned by Ferrovie dello Stato) for the planning and construction of a high-speed network in Italy.

The purpose of Treno Alta Velocità construction is to aid travel along Italy's most saturated and used rail lines and through the establishment of dedicated high speed rail corridor tracks to these lines. First focus are the Milan to Salerno and the Turin to Trieste corridors. The aims of the project include: aligning the operations of the Italian rail network to European rail standards; dramatically expanding the availability of high-speed rail throughout the country; improvement travel times between Italy's numerous cities, substantially increasing line capacities and train frequencies, and enhancing safety through updates in train control and signaling. Italy's new high speed lines will be used principally for passenger services only during the day (AV - Alta Velocita'), for freight (AC - Alta Capacita') during the night. Legacy lines will be used primarily for low-speed regional rail service and freight trains. When fully realized, the Italian high speed network will be fully inter-operational with other European rail networks (France, Germany, Spain).

The Milan to Salerno is the major north - south corridor of the Treno Alta Velocità network running substantially the length of the Italian peninsula.

The Milan–Bologna operating segment opened on 13 December 2008. Its construction cost 6.9 billion euro. This 182 km (113 mi) line runs parallel to the Autostrada del Sole, traversing 7 provinces and 32 municipalities. There are eight high speed interconnections to the historic line. At the Reggio Emilia interconnection a new station designed by the Valencian architect Santiago Calatrava has been constructed. Calatrava has also designed a signature bridge where the line crosses the A1 motorway. This segment will travel through a new multi-level station at Bologna (Italy's principal railway junction) designed by Japanese architect Arata Isozaki. 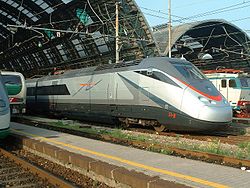 The Bologna–Florence operating segment opened on 12 December 2009, allowing a 37-minute journey between the two cities (3 hours from Milan to Rome). For its size, complexity, cost and deployment of resources, the high speed Bologna-Florence segment set records: 93% of its about 78.5 km of total track runs through tunnels within the Apennines range, among the world’s most difficult, varied and complex to tunnel through.[citation needed] The line offers a total of 9 tunnels, with length ranging from a minimum of 600 meters to a maximum of 18.5 km and which are separated by short overground stretches (less than 5 km in total). This almost makes the Bologna-Florence line a single, immense tunnel. Florence will host a major new multi-level high speed station at Belfiore designed by British architect Lord Foster.

The Florence–Rome operating segment represents the previously constructed "Direttissima" (literally: most direct) line between the two cities (240 km). Opened as the first high speed line in Europe, the "Direttissima" was completed in various phases between 1977 and 1986 (this segment is currently being upgraded by Treno Alta Velocità). Entering Rome, high speed trains have the option of stopping at either the new intermodal station at Tiburtina Station developed by Roman architects ABD Associate Architects led by Paolo Desideri or traveling to the iconic Termini station.

The Rome to Gricignano di Aversa operating segment heads south from the Italian capital. Service on the first new high speed segment of the project started in December 2005. This line runs through 61 municipalities in two regions (Latium and Campania) and offers connection to the existing national rail network at Frosinone Nord, Cassino Sud and Caserta Nord. The segment to downtown Naples - (Napoli Centrale) - from Gricignano di Aversa (18 km) is under construction. While in the Campania region, the line passes through Afragola where a major new transfer station will be developed, designed by Iraqi born architect Zaha Hadid.

Italy’s High Speed/High Capacity system will be completed with new lines southward, between Naples, Bari and Reggio Calabria onto Palermo via the Strait of Messina Bridge (planned).[citation needed][dubious – discuss]

The Turin to Novara operating segment of the Turin to Trieste corridor runs 85 km and opened in February 2006. The Novara to Milan operating segment opened on 12 December 2009, allowing a 59-minute journey between Milan Centrale and Turin Porta Nuova stations (45 minutes from Milan Porta Garibaldi to Turin Porta Susa). The two segments combine for total of 125 km, 80% of which are in the region of Piemonte (provinces of Turin, Vercelli, Novara for a total of 98 km) and 20% in the region of Lombardy (province of Milan, 27 km). To minimize its impact on the area, the Turin to Milan segments run inside the existing infrastructure corridor, next to the A4 Turin-Milan motorway.

The Milan to Venice segment includes operating stretches from Padova to Mestre (land side Venice) and Milan to Treviglio now in service. Priority sections of track are under construction: the approval procedures for the Treviglio to Brescia tracks will begin shortly.

A new line connecting Milan to the port of Genoa is now in development and further expansion of the trans-Alpine lines will integrate the Italian network into the European networks planned by the EU and the large intermodal pan-European transport corridors.

The objective of the new Alpine rail links is to increase rail transport, aimed mainly at supporting the forecast development of freight transport on international lines, complete interoperability between European High Speed networks, the shift from road to rail transport of a large percentage of freight for modal rebalancing, higher safety levels in tunnels as specified in the new European technology and construction standards.