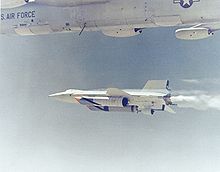 An X-15A2, with sealed ablative coating, external fuel tanks, and ramjet dummy test, on this upgraded model. (dropped by a B-52)

The North American X-15 rocket-powered aircraft/spaceplane was part of the X-series of experimental aircraft, initiated with the Bell X-1, that were made for the USAAF/USAF, NACA/NASA, and the USN. The X-15 set speed and altitude records in the early 1960s, reaching the edge of outer space and returning with valuable data used in aircraft and spacecraft design. As of 2011[update], it holds the official world record for the fastest speed ever reached by a manned rocket-powered aircraft.[1]

During the X-15 program, 13 of the flights (by eight pilots) met the USAF spaceflight criteria by exceeding the altitude of 50 miles (80 km) thus qualifying the pilots for astronaut status. The USAF pilots qualified for USAF astronaut wings, while the civilian pilots were later awarded NASA astronaut wings.[2][3]

Of all the X-15 missions, two flights (by the same pilot) qualified as space flights per the international (Fédération Aéronautique Internationale) definition of a spaceflight by exceeding 100 kilometers (62.1 mi, 328,084 ft) in altitude.

The X-15 was based on a concept study from Walter Dornberger for the NACA for a hypersonic research aircraft.[4] The requests for proposal were published on 30 December 1954 for the airframe and on 4 February 1955 for the rocket engine. The X-15 was built by two manufacturers: North American Aviation was contracted for the airframe in November 1955, and Reaction Motors was contracted for building the engines in 1956.

Like many X- series aircraft, the X-15 was designed to be carried aloft, under the wing of a NASA B-52 mother ship, the Balls 8. Release took place at an altitude of about 8.5 miles (13.7 km) and a speed of about 805 kilometers per hour (500 mph).[5] The X-15 fuselage was long and cylindrical, with rear fairings that flattened its appearance, and thick, dorsal and ventral wedge-fin stabilizers. Parts of the fuselage were heat-resistant nickel alloy (Inconel-X 750).[4] The retractable landing gear comprised a nose-wheel carriage and two rear skis. The skis did not extend beyond the ventral fin, which required the pilot to jettison the lower fin (fitted with a parachute) just before landing. 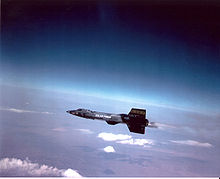 A dropped X-15 prior to rocket engine main ignition

The X-15 was a research aircraft, and there were changes to it over the course of the program and between the different airframes. The X-15 had to be operated under several different situations including the time attached to a carrier aircraft, drop, main engine start and acceleration, a ballistic flight into thin air/space, re-entry into thicker air, and an unpowered glide to landing. Alternatively, if the main engine was not started the pilot needed to go directly to a landing. The main rocket engine only operated for a relatively short part of the flight, but was capable of boosting the X-15 to its high-speeds and altitudes. The X-15's instruments and control surfaces were not unpowered without the main engine, its just that it could not maintain altitude.

The X-15 had multiple control systems for the pilot, including a traditional rudder and stick, but also another joystick on the left which gave commands to the reaction control system (RCS).[6] There was yet another joystick on the right for use during high G maneuvers that augmented the center stick.[6] The X-15 also had a "Stability Augmentation System" (SAS) which gave extra inputs to the aerodynamic controls to help the pilot maintain control.[6] The reaction control system could be operated in two modes: manual and automatic.[7] The automatic mode used a feature called "Reaction Augmentation System" (RAS) that helped stabilize the vehicle during high altitudes.[7] The RAS was typically used for around three minutes of a X-15 flight before being automatically turned off.[7] The X-15 actually had two different types of controls, one type was just discussed and was used on airframe 1 and 2, and another on airframe 3.[7] Airframe 3 had the MH-96 flight control systems, allowing one joystick in place of three and allowing simpler pilot inputs over the course of a flight.[8]

Among the many other controls, were the rocket engine throttle and a control for ejecting the bottom tail fin.[6] Another feature of the cockpit were heated windows to prevent icing, and a forward headrest for periods of high de-accleration.[6]

The X-15 had an ejection seat that allowed ejection at speeds up to Mach 4 and/or 120,000 feet (~36.6 km) altitude, although it was not used during the program.[6] In the event of ejection, the seat had deployable fins which were used until it reached a safer speed/altitude, where it could deploy its main parachute.[6] Pilots wore a pressure suit, pressurized with nitrogen gas.[6] Above 35,000 ft (~10.7 km) altitude, the cockpit was pressurized to 3.5 psi with nitrogen gas, and oxygen for breathing was fed separately to the pilot.[6]

Early flights used two Reaction Motors XLR11 engines. Later flights were undertaken with a single Reaction Motors Inc XLR99 rocket engine generating 57,000 pounds-force (250 kN) of thrust that powered the aircraft. This engine used ammonia and liquid oxygen for propellant and hydrogen peroxide to drive the high-speed turbopump that delivered fuel to the engine.[9] The XLR99s could be throttled, and were the first such controllable engines that were man-rated.[disputed – discuss]

The XLR11 used ethyl alcohol and liquid oxygen, and the XLR99 used ammonia and liquid oxygen as fuel. The X-15 reaction control system (RCS), for maneuvering in low-pressure, used hydrogen peroxide as a monopropellant.[7] It is actually high-test peroxide, and it decomposes into water and oxygen in the presence of a catalyst, and can give an ISP of 140 seconds.[10] The HTP also powered a turbopump for the main engines and auxiliary power units (APUs).[9] Additional tanks for helium and liquid nitrogen performed other functions, for example the fuselage interior was purged with helium gas and the liquid nitrogen was used as coolant for various systems.[9]

The X-15 had a thick wedge tail for stability at hypersonic speeds.[11] However, this produced a lot of drag at slower speeds.[11] In fact, the blunt end of the X-15 could produce as much drag as an entire F-104 Starfighter.[11]

A wedge shape was used because it is more effective than the conventional tail as a stabilizing surface at hypersonic speeds. A vertical-tail area equal to 60 percent of the wing area was required to give the X-15 adequate directional stability.

Additionally, stability at hypersonic speeds was aided by side panels that could extend out from the tail to further increase area, and these panels doubled as air-brakes.[11] 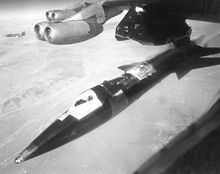 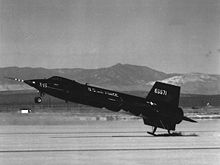 X-15 touching down on its skids, with jettisoned lower ventral fin.

Three X-15s were built, flying 199 test flights, the last on 24 October 1968. The first X-15 flight was an unpowered test flight by Scott Crossfield, on 8 June 1959; he also piloted the first powered flight, on 17 September 1959, with his first XLR-99 flight on 15 November 1960. Twelve test pilots flew the X-15; among them were Neil Armstrong (first man to walk on the moon) and Joe Engle (later a space shuttle commander). In July and August 1963, pilot Joe Walker crossed the 100 km altitude mark, joining the NASA astronauts and Soviet Cosmonauts as the first humans to have crossed the barrier into outer space.

On 15 November 1967, U.S. Air Force test pilot Major Michael J. Adams was killed on X-15 Flight 191 when the (X-15-3) entered a hypersonic spin while descending, then oscillated violently as aerodynamic forces increased after re-entry. As his aircraft's flight control system operated the control surfaces to their limits, acceleration built to 15 g vertical and 8 g lateral. The airframe broke apart at 60,000 ft (18,000 m) altitude, scattering the X-15's wreckage for 50 square miles (130 km2). On 8 June 2004, a monument was erected at the cockpit's locale, near Randsburg, California.[12] Major Adams was posthumously awarded Air Force astronaut wings for his final flight in X-15-3, which had reached 81.1 km (50.4 mi, 266,000 ft) of altitude. In 1991, his name was added to the Astronaut Memorial.

The altitudes attained by the X-15 aircraft do not match that of Alan Shepard's 1961 NASA space capsule flight nor subsequent NASA space capsules and space shuttle flights. However, the X-15 flights did reign supreme among rocket-powered aircraft until the second spaceflight of Space Ship One in 2004.

A 200th flight over Nevada was slated for 21 November 1968, piloted by William J. Knight. Technical problems and bad weather delayed the flight six times, and on 20 December 1968, the 200th flight was finally canceled. The X-15 was detached from the NB-52A wing and prepared for indefinite storage.

X-15 at the National Air and Space Museum

Before 1958, USAF and NACA, (later NASA), officials discussed an orbital X-15 spacecraft, the X-15B for launching to outer space atop an SM-64 Navajo missile. This was canceled when NACA became NASA, and Project Mercury was approved instead. By 1959, the Boeing X-20 Dyna-Soar space-glider program became the USAF's preferred means for launching military manned spacecraft into orbit; however, this program was canceled in the early 1960s before an operational vehicle could be built.[2] Various configurations of the Navajo were considered, and another proposal proposed a Titan I stage.[14]

There are two definitions of how high a person must go to be referred to as an astronaut. The USAF decided to award astronaut wings to anyone who achieved an altitude of 50 miles (80 km) (80.5 km) or more. However, the FAI set the limit of space at 100 kilometers (62.1 mi). Thirteen X-15 flights went higher than 50 miles (80 km) and two of these reached over 100 kilometers. 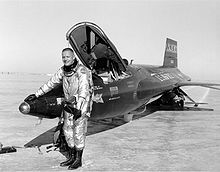 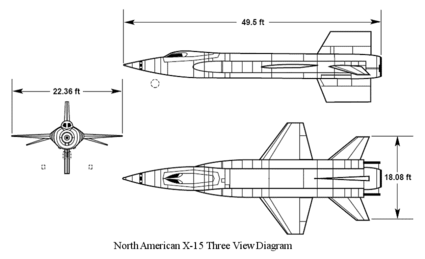