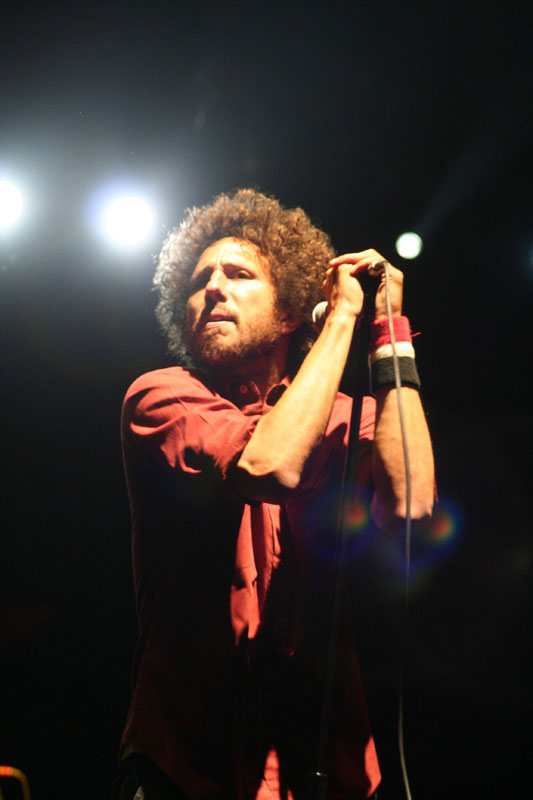 Zacarías Manuel de la Rocha (born , in Long Beach, ) is an American rapper, , , , and activist of descent. He is best known as the and of and is currently the frontman of the music duo, .

In his early youth, de la Rocha's father (known as Beto)—a member of Los Four, the first Chicano art collective to be exhibited at a major museum (LACMA, 1973)—suffered a nervous breakdown and took his religious ideals to extremes. He destroyed his art and when Zack visited him on the weekends, he was forced to fast, sit in a room with the curtains closed and the door locked and help destroy his father's paintings.

After a while, he was unable to cope with this lifestyle and stayed with his mother in Irvine.Fact|date=May 2008 For elementary school, he attended the UC Irvine Farm School, a laboratory school housed in ranch hands' bungalows associated with a slaughterhouse operation that was formerly on the site - houses that are among the very few still in existence from the Irvine Ranch.Fact|date=May 2008 Among the people he met there was his future Rage Against the Machine band mate, bassist .Fact|date=May 2008

While attending , de la Rocha became involved in the scene and played guitar and sang for various bands, including Juvenile Expression with Commerford. His interest in bands like the and turned into an appreciation for other bands like , , and , and he joined the band Hardstance.

De la Rocha eventually formed the Hardcore band Inside Out, which gained a large national underground following. They released a single record, "", on in 1990 before breaking up. In de la Rocha's words, Inside Out was "about completely detaching ourselves from society to see ourselves as...as spirits, and not bowing down to a system that sees you as just another pebble on a beach. I channeled all my anger out through that band."

After Inside Out broke up, he embraced and began at local clubs, where he met and . Eventually de la Rocha's bandmate Commerford joined them and was formed.

Rage Against the Machine

Rage Against the Machine was on the main stage at in 1993 and was one of the most politically charged bands ever to receive extensive airplay from radio and . De la Rocha became one of the most visible champions of political causes around the world while advocating in favor of and , and supporting the Zapatista movement in . He even spoke on the floor of the UN, testifying against the and its treatment of Abu-Jamal. The music and the message were so intertwined for him that he did not consider any of Rage's albums a success unless they provoked tangible political change.Fact|date=June 2008 Rage's second and third albums peaked at number one in the United States, but did not result in the political action de la Rocha had hoped for. He became increasingly restless and undertook collaborations with artists such as , , and Public Enemy.

On , , Rage Against the Machine performed their last show before breaking up, during which de la Rocha gave a notable speech before playing "":

In October 2000, de la Rocha left Rage Against the Machine, due to "creative differences." It is rumored that Commerford's stunt at the 2000 Video Music Awards, where he climbed atop of a fixture on stage because RATM had lost the award for Best Rock Video to , may have contributed to de la Rocha's decision to leave the band. Commerford later stated he had pulled the stunt in protest that cameras at the awards show were already hovering over Limp Bizkit before anything was even announced, which he disagreed with.Fact|date=July 2007

The other members of the band sought out separate management and secured the immediate release of the album "Renegades". On , , de la Rocha released the following statement:

After searching for a replacement for de la Rocha, the other members of Rage joined up with of to form .

After RATM's breakup, de la Rocha worked on a solo album he had been recording since before the band's dissolution, working with , , , , , , and ' with production partner . The album never saw fruition, and de la Rocha started a new collaboration with of , in which around 20 tracks were produced.

cquote|Without just cause or reason, without legal or moral justification, and without a thread of proof that directly threatens the security of the United States, the Bush administration has headed to war. As I am writing this, bombs are raining upon the defenseless civilians of in a continuation of a policy that has already claimed the lives of over 1 million innocent Iraqi people. People just like us who want but find themselves cornered by a dictator on one side, naked U.S. aggression on another, and the beneath their country; for which it appears they are to be massacred.

Lies, sanctions, and cruise missiles have never created a free and just society. Only everyday people can do that, which is why I'm joining the millions world wide who have stood up to oppose the Bush administration's attempt to expand the U.S. empire at the expense of at home and abroad. In this spirit I'm releasing this song for anyone who is willing to listen. I hope it not only makes us think, but also inspires us to act and raise our voices. [ [http://www.zackdelarocha.com/ Zack de la Rocha.com] , official website promoting "March of Death". Retrieved February 17, 2007.]

The 2004 soundtrack "" included one of the collaborations with Reznor, "". This album also contained the debut recording by former Rage Against The Machine guitarist as , "No One Left".

On , , de la Rocha returned to the stage with new material, performing with band Son de Madera. He later spoke as MC and again performed with Son de Madera at the November 22 Concert at the Farm, a benefit concert for the ers. He sang and played the with the band, and performed his own new original material, including the song "Sea of Dead Hands". [ [http://i7.photobucket.com/albums/y255/ratm1211/llllll.jpg"Backstage Pass"] (February 2006), "Spin". Retrieved February 17, 2007.]

Rage Against the Machine Reunion

Rumors that Rage Against the Machine could reunite at the were circulating in mid-January 2007, and were confirmed on . [cite web | last = Boucher | first = Geoff | title = Rage Against the Machine will reunite for Coachella | work = | publisher = LATimes.com | date = , 2007 | url = http://www.latimes.com/entertainment/news/music/la-et-coachella22jan22,1,6747076.story?coll=la-headlines-entnews&ctrack=1&cset=true | accessdate = 2007-01-22] The band was confirmed to be headlining the final day of Coachella 2007.

On , , Morello and de la Rocha reunited onstage early to perform a brief acoustic set at in at the rally for fair food with the (CIW). Morello described the event as "very exciting for everybody in the room, myself included." Rage Against the Machine, as a full band, headlined the final day of the 2007 on April 29. The band played in front of an EZLN backdrop to the largest crowds of the festival. The performance was initially thought to be a one-off, this turned out not to be the case. The band played 7 more shows in the in 2007, and in 2008, they played their first shows outside the US as part of the Festival in and . The band has since continued to tour around the world, headlining many large festivals in and the , including in .

At Rage's first reunion show, de la Rocha made a speech during "Wake Up" in which de la Rocha called numerous American presidents war criminals, citing a statement by regarding the : [ [http://www.zmag.org/chomsky/rage/ Interview of Noam Chomsky by Tom Morello in 1996] ]

During Rage Against The Machine's performance at in , de la Rocha made another speech during the instrumental break in "Wake Up" saying:cquote2|For the last eight years, all we've heard about is some mysterious outside force that threatens our security and our livelihood everyday... we've been told the last eight years...that some outside force is threatening our way of life and our jobs and our livelihoods...and after eight long years of that bullshit...it must dawn on all of us that its that same government that is the terrorist force sitting across from us. And I'm not just talking about the Bush administration, but the whole sick, conformist apparatus - Democrats too! They're supposed to step up and be our voice in congress and they turned their backs on us. They turned their backs on the workers. They turned their backs on the soldiers. They got right behind Bush lock step and got this country into another sick war. Now we know brother Obama. We know brother Obama. But I tell you what, if he comes to power come November and he doesn't start pulling troops out of Afghanistan and Iraq, I know a lot of people who are gonna stand up and burn down every office of every Senator that doesn't do his job. All this hell we've been seeing is just the beginning, it's just the beginning. And no matter what happens in the elections, I'll say this. That there is a generation of young black and latino brothers and sisters that are gonna force everyone in this country to make a decision very soon about what side they're going to stand on. And they're a generation of kids who don't give a fuck about national politics. They care about bread. They care about water. They care about housing and they care about justice. And they ain't gonna fucking stand for any of that shit. They're just not gonna take it. This new generation of blacks and latinos and Muslim brothers and sisters are gonna stand up and make this country an offer it can't refuse. An offer it can't refuse. So wake up! Wake up! Wake up!|Zack de la Rocha|

In an article published in "Billboard", it was announced that work had been completed on de la Rocha's first solo album, which he had been working on at least since his departure from RATM in 2000 and, by some accounts, as early as 1995. [ [http://www.zdlr.net/board/index.php?showtopic=6914&st=0 Post from former band manager] ] The project with former drummer is titled . Sources familiar with the album say it features de la Rocha playing keyboards and that the sound is a hybrid of and . [ [http://www.nme.com/news/rage-against-the-machine/31204 Rage Against The Machine man finishes solo album | News | NME.COM ] ] It was also said that a portion of the recording took place recently at Jack Johnson's new eco-friendly studio in Los Angeles.

One Day as a Lion

is a band consisting of Rage Against the Machine frontman Zack de la Rocha and former drummer . The group combines rock drumming, electro keyboards, and hip-hop vocals. De La Rocha will be playing keyboards as well as providing vocals with Theodore on the drums for their self-titled EP. The band's name derives from an infamous black and white graffiti photograph taken by Chicano photographer George Rodriguez in 1970 with a caption reading "It's better to live one day as a lion, than a thousand years as a lamb". They released their debut EP, "One Day as a Lion" on on July 22, 2008.