Magnetic resonance angiography (MRA) is a group of techniques based on Magnetic Resonance Imaging (MRI) to image blood vessels. Magnetic resonance angiography is used to generate images of the arteries in order to evaluate them for stenosis (abnormal narrowing), occlusion or aneurysms (vessel wall dilatations, at risk of rupture). MRA is often used to evaluate the arteries of the neck and brain, the thoracic and abdominal aorta, the renal arteries, and the legs (called a "run-off").

A variety of techniques can be used to generate the pictures, based on flow effects or on contrast (inherent or pharmacologically generated). These images, unlike conventional or CT angiography do not display the lumen of the vessel, rather the blood flowing through the vessel.

The accrued phase is proportional to both vx and the 1st moment of the bipolar gradient, Δm1, thus providing a means to estimate vx. γ is the Larmor frequency of the imaged spins. To measure ΔΦ,

of the MRI signal is manipulated by bipolar gradients (varying magnetic fields) that is preset to a maximum expected flow velocity. An image acquisition that is reverse of the bipolar gradient is then acquired and the difference of the two image is calculated. Static tissues such as muscle or bone will subtract out, however moving tissues such as blood will acquire a different phase since it moves constantly through the gradient, thus also giving its speed of the flow. Since phase-contrast can only acquire flow in one direction at a time, 3 separate image acquisitions in all three directions must be computed to give the complete image of flow. Despite the slowness of this method, the strength of the technique is that in addition to imaging the flowing blood, quantitative measurements of blood flow occur at the same time.

Similar procedures to flow effect based MRA can be used to image veins. Called Magnetic resonance venography (MRV) this can be achieved by exciting a plane inferiorly while signal is gathered in the plane immediately superior to the excitation plane, and thus imaging the venous blood which has recently moved from the excited plane. Differences in tissue signals, can also be used for MRA. This method is based on the different signal properties of blood compared to other tissues in the body, independent of MR flow effects. This is most successfully done with balanced pulse sequences such as TrueFISP or bTFE. BOLD can also be used in stroke imaging in order to assess the viability of tissue survival.

MRA techniques in general are sensitive to turbulent flow, which causes a variety of different magnetized proton spins to mix inside a single voxel thus causing a local loss of signal (intra voxel dephasing). This can cause mis-diagnosis of stenosis. Other types of MRA related artifacts include: 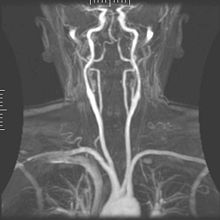 Occasionally, MRA directly produces (thick) slices that contain the entire vessel of interest. More commonly, however, the acquisition results in a stack of slices representing a 3D volume in the body. To display this 3D dataset on a 2D device such as a computer monitor, some rendering method has to be used. The most common method is Maximum intensity projection (MIP), where the computer simulates rays through the volume and selects the highest value for display on the screen. The resulting images resemble conventional catheter angiography images. If several such projections are combined into a cine loop or QuickTime VR object, the depth impression is improved, and the observer can get a good perception of 3D structure. An alternative to MIP is direct volume rendering where the MR signal is translated to properties like brightness, opacity and color and then used in an optical model.

MRA has been successful in studying many arteries in the body, including cerebral and other vessels in the head and neck, the aorta and its major branches in the thorax and abdomen, the renal arteries, and the arteries in the lower limbs. For the coronary arteries, however, MRA has been less successful than CT angiography or invasive catheter angiography. Most often, the underlying disease is atherosclerosis, but medical conditions like aneurysms or abnormal vascular anatomy can also be diagnosed.

An advantage of MRA compared to invasive catheter angiography is the non-invasive character of the examination (no catheters have to be introduced in the body). Another advantage, compared to CT angiography and catheter angiography, is that the patient is not exposed to any ionizing radiation. Also, contrast media used for MRI tend to be less toxic than those used for CT angiography and catheter angiography, with less people having any risk of allergy. Also far less is needed to be injected into the patient. The greatest drawbacks of the method are its comparatively high cost and its somewhat limited spatial resolution. The length of time the scans take can also be an issue, with CT being far quicker. It is also ruled out in patients who are unsafe for MRI (such as having a pacemaker or metal in the eyes or certain surgical clips).

MRA procedures for visualizing cranial circulation are no different to the positioning for a normal MRI brain. Immobilization within the head coil will be required. MRA is usually a part of the total MRI brain examination and adds approximately 10 minutes to the normal MRI protocol.