Beat of My Heart

Beat of My Heart 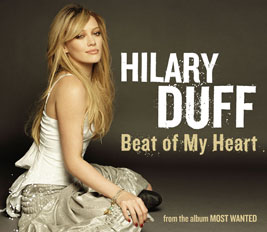 "Beat of My Heart" is a song co-written by American singer , and , and co-produced by the Maddens for Duff's fourth album, "Most Wanted" (2005). It was released as the album's second single in late 2005 (see ).

In the United States, in contrast to "Wake Up", the first single from "Most Wanted", "Beat of My Heart" failed to chart on the "Billboard" Hot 100 or the . [ [http://www.billboard.com/bbcom/retrieve_chart_history.do?model.vnuArtistId=499349&model.vnuAlbumId=722213 "Hilary Duff - Artist Chart History"] . "Billboard". Retrieved .] It reached number thirteen in , peaking higher than "Wake Up", and it stayed on the chart for fourteen weeks. "Fly" was released as the second single in Europe except in countries such as , where "Beat of My Heart" peaked at number eighty-nine.

The "Beat of My Heart" was shot in by director in the week beginning ,

The video begins with a graphic produced by an accompanying the heartbeats in the song, until a beating heart appears as if seen through an machine.

The video premiered on 's "" on . It entered the "TRL" top ten countdown the following day and ascended to number one on . [ [http://www.absolutetrl.net/records/recaparchive/2005_11.html "TRL Archive - November 2005"] . AbsoluteTRL. Retrieved .] It remained on the countdown for twenty days, until . [ [http://www.absolutetrl.net/records/recaparchive/2005_12.html "TRL Archive - December 2005"] . AbsoluteTRL. Retrieved .

] The sketch show "" did a parody of the song and music video, "For the Sake of My Fame", which featured Arden Myrin as Duff. The parody was centered on young female celebrities such as , and Duff herself allegedly becoming anorexic to stay thin and popular.