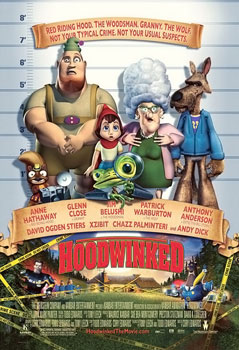 "Hoodwinked!" is a 2005 family comedy produced by with Kanbar Entertainment. It was released by in selected markets on , , before expanding nationwide on , . It was written and directed by , Todd Edwards, and Tony Leech, and stars the voices of , , Jim Belushi, , , , , , , and . An alternate title of the film was "Hoodwinked! The True Story of Red Riding Hood". [imdb|id=hoodwinked|title=Hoodwinked]

Based on the "" folktale, structurally, it borrows from the films "Rashomon" and "", as well as frequently intertwining various plots. The film's setting uses the same type of anachronistic and satirical mixing of modern and fantasy culture as the "" films. It is 80 minutes long and is rated PG for mild action and thematic elements. A twenty-two minute behind the scenes video podcast is available for free in .

A sequel to the film, titled "" is currently in the making and is expected to be released in .

The story begins ; Little Red Riding Hood () arrives at her Granny's () house and encounters the Wolf (), seeing through his transparent Granny disguise. As the Wolf reveals himself anyway, Granny jumps out of the closet, bound and gagged, followed by a crazed-looking, axe-wielding Woodsman (Jim Belushi) bursting through the window, screaming, to the horror of the other three. Mid-scene, the story jumps ahead to the police cordoning off Granny's house following the opening events. The lead investigator, frog-form Nicky Flippers (), interrogates each of the four participants, with each character giving their own version of how and why they arrived at the house.

Red Puckett, the first interview subject, is a fiesty preteen who uses her "innocence" to convince Flippers that she is not guilty. She tells Flippers that she is merely a delivery person for her Granny's "goodies", and that when she came across the ransacked home of another goody-maker, the latest in a recent string of such attacks by a thief known only as the Goody Bandit, whose crimes have resulted in the closure of many goody makers in the forest, Red decided to take the hidden recipe book in the house for safekeeping. This admission appears self-ruinous, as it casts Red in a suspicious light, but Red asserts her innocence, adding that on her way to Granny's house, she fell from an air trolley she was riding with the rabbit Boingo (), and when she landed in the forest, she ran into the Wolf, who, after questioning her, appeared to become hostile. After using a "Wolf Away" spray (much like pepper spray) on Wolf, Red (with the help of some birds) tricks the Wolf into falling into the river. She then continues on her journey using a system manned by Japeth, a singing with detachable horns with different uses. The two soon find themselves in the middle of an avalanche which they barely escaped using the tunnel, but as the railway cart they were riding emerged from the mountain, Red saw that the tracks far ahead of them were apparently destroyed, and an image of her Granny appeared in the sky above her instructing her to use her hood as a parachute, which Red successfully did (the goat used a pair of -horns to land safely himself). She enters Granny's house, and the confrontation unfolds.

Flippers then interrogates Wolf W. Wolf, who it appears certain is the culprit. But Wolf reveals that he is an investigative reporter, modelled after 's character Fletch, whose prior stories Flippers are familiar with, and tells him that he and his hyperactive photographer, a squirrel named Twitchy, were investigating the recent thefts of various recipes by the Goody Bandit, and became suspicious of Red when he saw her traipsing through the forest with goodies in a basket. He explains that he was merely questioning Red because it was his job, and that when his tail got caught in the film chamber of Twitchy's camera (which Twitchy was fixing after he accidentally swallowed his camera), he roared in pain, which Red mistook as an attack, and beat him up far more extensively than in her version of the tale. After being tricked down the river by Red and the birds, the Wolf decided to beat her to Granny's. After using a shortcut provided by Boingo the rabbit, the Wolf and Twitchy used the mountain railway system, which was destroyed when Twitchy lit a candle in the cart that turned out to be a stick of (which he pronounced Dean-Uh-Meet-Eh). It turns out that the ensuing explosions are what destroyed the track and caused Red to ramp into the air. The duo arrive at Granny's house, and Wolf throws Twitchy in the closet to hide, but Granny is already there, and already tied up, which complicates the authorities' view of the Wolf as the culprit. Wolf puts on a Granny disguise, and the confrontation is again seen. Twitchy then shows Flippers the photographs he took that provides Wolf's which clears suspicions that Wolf was the culprit.

The Woodsman is then interrogated. He reveals that he is an aspiring , and that for , he drives a goody truck, selling on a stick to children. He tells Flippers that after a disastrous audition for a bunion cream commercial, where his thick Bavarian accent hurt his chances, he then discovers that his goody truck has been robbed in another attack by the Goody Bandit. The Woodsman, the children, and Boingo, who was apparently passing through the area, were all surprised. The Woodsman is distraught, but receives a callback for the commercial, and decides to prepare for the role of a woodsman by chopping down trees. After chopping away most of a giant tree, he finds himself atop it as it rolls down the hill towards Granny's house, and he is thrown through the living room window, hollering the entire way. This makes him the only person there completely by accident.

Granny Puckett is the last to be interviewed. She reveals that she is an extreme athlete known as Triple G (a homage to the character Triple X in "") who prefers activities like snowboarding to being the stereotypical goody-making grandmother. She explains that she enjoys such activities, and that at the Extreme Dream Snow Sports competition between her teammates and an imposing an ski-team, Boingo the rabbit even asked for her autograph. She tells Flippers that during the race down the mountain, the opposing team physically attacked her and her team. Despite knocking two out with snowballs, the largest of the group nearly knocks her off the cliff. With Granny clutching onto his arms, he admits that he and the team were hired by the Bandit, before pushing her off the cliff. However, she managed to get back onto the mountain, causing an with two explosive charges to delay the ski team, and is the same avalanche that almost got Red in her story, before escaping via a (winning the race in the process). As she approached her home, she saw Red below her in the railway cart, and advised her to use her hood as her own parachute (Which Red assumed was just a spiritual guide of somesort). Shortly after, Granny arrived in her bedroom. Her parachute became caught in the ceiling fan, and she ended up wrapped up in it and thrown into her own closet. The familiar confrontation with Red, Wolf and the Woodsman then ensued where Granny popped out of the closet by banging Twitchy against the closet door to force it open. The revelation of Granny's other life is a shock to Red, who is hurt that Granny kept her other life a secret from her, and leaves.

The police are back to square one, as none of the four appears to be culprit, but then the basket of Granny's goodies and the recipe book is found to be missing, as is Red. Before the police jump to the conclusion that Red was the culprit, Flippers deduces that there was only one other figure who was present during all four accounts: Boingo. As soon as he makes this revalation, Red witnesses Boingo in possession of the stolen recipie. Red follows him on the air tram up to the mountain, where he and his henchmen, the aforementioned opposing skiing team, plan to corner the market on goodies, and make them highly addictive to kids. Flippers and the police learning of the missing tram go down the mountain, just as the group discovers the villains heading up the mountain, while Red confronts Boingo, engages him in a fight, and loses due to the bunny's suprising ability to use his ears for impressive karate. After revealing their plan to her, she is tied up, gagged, and placed in the air tram filled with dynamite to destroy the forest. While a caffeine-enhanced Twitchy goes to alert the police that they are heading the wrong way, Wolf, Granny, and the Woodsman follow, and foil Boingo's evil plans. Red is freed from the air tram before it explodes, and Boingo and his henchmen are captured by the police. The next day, Flippers tells Red, Granny, the Wolf, and Twitchy (the Woodsman went on to become a world-famous yodeler) that he is a member of the "Happily Ever After Agency", and enlists the four to work for him.

* as Red Puckett
* as Granny Puckett
* Jim Belushi as The Woodsman
* as Wolf W. Wolf
* as Det. Bill Stork
* as Det. Nicky Flippers
* as Chief Grizzly
* as Woolworth
* as Boingo
* as Twitchy
* as Japeth
* Joshua J. Greene as Jimmy Lizard
* as Raccoon Jerry
* as Tommy
* Preston Stutzman as Timmy
* Tony Leech as Glen
* as P-Biggie
* as Zorra

The soundtrack by Todd Edwards and was released with the film. Due to legal wrangles, the CD has not been available since the first run. This has resulted in a higher resale value than the list price.

On , as of August 2007, the film's overall score is 48%, which is Rotten. [rotten-tomatoes|id=1155109-hoodwinked|title=Hoodwinked] . On it received a score of 45/100 ("mixed or average reviews"). [metacritic film|id=hoodwinked|title=Hoodwinked Retrieved , .] On its opening weekend the box office totaled up to $16,879,402. It has grossed $110,011,106 worldwide, including $51,386,611 in the . [mojo title|id=hoodwinked|title=Hoodwinked Retrieved , .] The film missed the number one box office spot by less than $50,000, a record race for that weekend. On home video, "Hoodwinked" was the number one DVD its first week of release. The soundtrack was one of the top 25 soundtracks on iTunes in its first week. This soundtrack is no longer available, but can be found periodically on Ebay.