Matthew Stephen "Matt" Elliott (born 1 November 1968) is a former professional footballer, most notably as a defender for Leicester City. Although born in England, he was never selected to play for them on an international level; he instead played for Scotland, for whom he was eligible due to his Scottish grandmother.

He captained Leicester to victory on the 2000 Football League Cup Final scoring both goals. 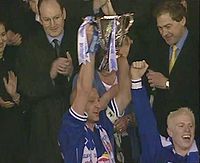 Elliott began his career in non-league football with Leatherhead and Epsom & Ewell, before getting his first taste of professional football with Charlton Athletic. Unable to break into the Charlton first-team, he moved to Torquay United within a year. He then worked his way up the ladder, signing for Scunthorpe United in March 1992, moving on to Oxford United in November 1993, and finally getting his chance in the Premiership when he was signed by Leicester City in early 1997 for a transfer fee of £1.6 million, which to this day remains Oxford's record sale.

When Martin O'Neill left to manage Celtic in July 2001, he made an attempt to lure Elliott to the club in a £3.5 million bid (O'Neill would raid his former club for the likes of Neil Lennon and Steve Guppy).[1] It was unsuccessful when Elliott signed the last contract of his career in August 2001, which would last until June 2005.[2] Elliott's made his last European appearance in a 3-1 defeat to Red Star Belgrade in Vienna on 28 September 2000 in the 2001 UEFA Cup.[3] It remains the club's last ever European match to this day.

He had a loan spell at Ipswich Town before his retirement. His final season was thwarted by a knee injury and, after making only three appearances, Elliott retired from football in January 2005.[4]

Elliott won eighteen caps for the Scotland national team, scoring one goal which was a header from an Allan Johnston cross in a 2–0 win against San Marino. He made sixteen starts and two appearances from the bench, including his debut against France in November 1997. He was in the Scotland squad for the 1998 World Cup although he did not appear in any of the games.

On 9 June 2008, Elliott was unveiled as the new assistant manager to former Torquay team-mate Dean Edwards at Northern Premier League team Hednesford Town. After a season that saw the Pitmen finish just outside the play-offs, Elliott stepped down from his position at Keys Park in May 2009 to concentrate on other business interests. He then became assistant manager of Midland Alliance side Oadby Town, until in October 2010 he became assistant manager of Conference North club Stafford Rangers, working under Tim Flowers.[5] Elliott was appointed manager after Flowers resigned from his managerial role on 11 January 2011.[6]